Dying to kill: Russian neo-Nazis fighting for “denazification” of Ukraine 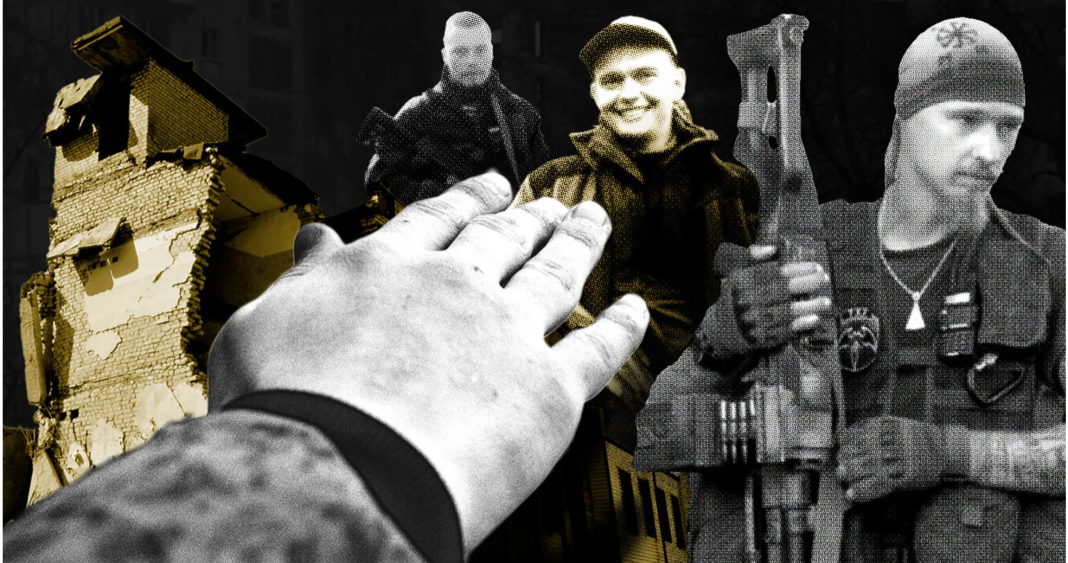 Throughout the six months of conflict, Vladimir Putin has insisted that Ukraine is run by neo-Nazis. For his part, Ukraine’s (Jewish) president Zelenskyaccuses Russian troops of repeating Nazi war crimes. It is a reminder of just how deeply rooted this conflict is, not just in the Cold War, but in 1939-45, the war which is key to Russia’s sense of identity.

Putin said when announcing the “special operation” in February.that one of Russia’s goals was to “denazify” Ukraine. In the six gruesome months since then, the Kremlin has continuously pushed the narrative that Russians are “destroying neo-Nazis”.

All Ukrainian soldiers as far-right radicals, the story goes. There is no mention of the thousands of innocent civilians killed, or of the millions made destitute and driven into exile. Nor, sigificantly, is there any mention of the self-styled ultra-right/ neo-Nazi Russian nationalists who are at the forefront of Russia’s worst atrocities.

The independent Russian and English language news website, Meduza, banished from Moscow and working on in Latvia, tells the story of how Russia’s neo-Nazis were drawn into Putin’s war. Meduza still has a network of amazingly brave journalists, who daily risk their lives to report on the truth about Putin’s toxic dictatorship.

Their detailed investigation follows the blood-soaked paths trodden by Russian mercenaries through the mayhem and rubble in Ukraine.

These include members of the Russian Imperial Legion, the swastika-wearing Rusich task force, and the sinister Wagner Group — a murderous private army financed by Kremlin-linked oligarchs and led by Putin crony, known as his “chef”, Evgeny Prigozhin. Many of them participated in wholesale massacres in Syria – some 48,000 Russian troops were involved in “eliminating terrorists” there, according to Russian defence minister Sergei Shoigu. The far-right, heavy metal band Russkyi Styag (Russian Warrior) band performs on the front line in Ukraine when not fighting.

Meduza‘s detailed investigation follows the footsteps of several leading fascist soldiers of fortune, some of whom have seen the light. It is a tale of turbo-charged hooliganism fuelled by falsely glamorous narratives of Valhalla, oppression, and imperialist glory. These are tales full of sound and fury (see: Macbeth, ActV Scene 5).

On the surface Ukraine is a mightily complex brew, but it is well worth reading writers and geopolitical experts of the calibre of Peter Pomerantsev. Pomerantsev’s prose rapidly clears the battleground smoke.

Writing in The Economist‘s 1843 magazine, Pomerantsev, himself born in Kyiv, says: “It’s easy to see why Ukraine confuses people.

“To the uninformed outsider, it confounds all ideas of what makes a nation. Most people are casually bilingual. It contains many histories simultaneously: the Russian, Soviet, and Austro-Hungarian empires, Poland, Romania, and of course Ukraine itself. This lattice of historical narratives has made many in the West feel as though the country is not quite real.”

To validate his invasions, Putin called the Ukrainian “operation” an act of “denazification”. The slur is absurd but also strategic, argues Pomerantsev, who was heading a large research team in Ukraine until the February 24 invasion.

“For the past few years I’ve been trying to unlock the secret of Ukrainian identity by talking to Ukrainians. Through my research project, Arena, based originally at the LSE and now at Johns Hopkins University, I’ve worked with Ukrainian journalists and sociologists to find ways of strengthening democracy. My team has interviewed thousands of adults across the country. Our fieldwork shows that the response to Russia’s invasion has deep roots in Ukrainian history.”

“It is well known that some prominent Ukrainian nationalists sided with the Nazis in the second world war because they thought Hitler would grant Ukraine independence; a number of them were comfortable with the Nazis’ anti-Semitism. When Hitler betrayed them, many turned on the Germans and fought against both them and the Soviet Union.

“In Soviet post-war propaganda, Ukrainian nationalists were caricatured as the fascist enemy of the good Soviet citizen. Anyone who grew up steeped in that milieu is receptive to this framing,” writes Pomerantsev.

“Putin and his supporters have tried to split the country between a supposed pro-Soviet east and pro-nationalist west. However, our polling found this split to be a mirage. There were at least four distinct groups. The Ukrainians who were most pro-Soviet were older, often pensioners, and less educated, living largely in rural areas in the south and east of the country. A tiny proportion of the population, less than 5%, approved of Stalin (the equivalent figure in Russia is 70%). The memory of the Holodomor, Stalin’s man-made famine which killed roughly 4m Ukrainians in 1932-33, still burns.

“Ukrainian myths of national identity coalesce around a collective: the Cossacks, bands of self-governing warriors who roamed the steppe. A recent successful film told the story of how Ukrainian Jews and Crimean Tatars created underground networks to help each other in the second world war, to fight first the Nazis and then the KGB.

“One of the most popular Christmas films in Ukraine is Home Alone, which has a narrative that resonates with Ukraine’s story: a small country abandoned by the world’s parents, always attacked by bigger powers, and having to improvise self-defence with anything that comes to hand.”

Pomerantsev writes: “In this war, Ukrainians are showing that they can resist one of their most frequent and violent abusers, the Kremlin. Among the friends I speak to there’s a sense that they are fighting not just against this invasion, but for all the other times Ukraine has been violated. Putin himself referred to the invasion as a rape: “You sleep my beauty, you’re going to have to put up with it anyway,” he told a stunned press pack during a session with the French president, Emmanuel Macron. In Lviv today you see posters of a woman in Ukrainian folk costume pushing a gun into Putin’s mouth: ‘I’m not your beauty,’ she says.”

Economist 1843 magazine – How the Ukrainians came together in adversity
Share
Facebook
Twitter
Pinterest
WhatsApp
Email
Print
Previous articleRedrawing the Iron Curtain
Next articleTwitter kills. Or maybe it can just get you locked up for life. And who really owns it?
- Advertisement -