One man’s struggle to save Russia’s honour 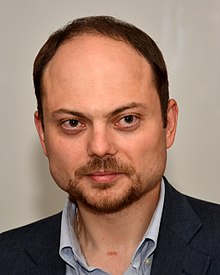 One of the most remarkable and fearless opponents of Vladimir Putin is his namesake Vladimir Kara-Murza, 40, a writer and film-maker whom Putin tried to have poisoned. That having failed, the Russian President is now intent on treating him to the kind of punishment Alexei Navalny, another FSB failure as a murder candidate, is now receiving in a prison colony.

Kara-Murza’s career began at the improbable age of 16, as a foreign correspondent for a succession of Russian media outlets: Novye Izvestia (1997–2000),  Kommersant (2000 to  2003), and the radio station Ekho Moskvy from 2001 to 2003…In 2003 – 2004 he was even the BBC’s Washington correspondent, ultimately Washington bureau chief of the RTVi television network until he was fired in 2012.

Son of another famous Russian journalist, and from an ancient Tartar family, Kara-Murza was recently feted in an article in The Hill, Washington’s Beltway publication, by his friend; Russian exile Leon Aron:

“On April 11, Vladimir Kara-Murza, one of the last nationally recognized opposition leaders to Vladimir Putin still at liberty in Russia, was arrested in Moscow. Any day now, an inevitable conviction by a kangaroo court is almost certain to send him to prison for years.

“The Kremlin tried to finish Kara-Murza off twice before. In 2015 he nearly died in Moscow, saved only by emergency doctors at Moscow’s First City Hospital as his vital organs were shutting down. “A victim of poisoning,” concluded a team of U.S. doctors cited in an FBI report.

“In more cautious terms, the FBI’s own lab pointed in the same direction: Kara-Murza’s “symptoms and health effects could not have been brought about without a toxin introduced to his system.” A year and a half later, he was at death’s door again, with the same symptoms.

“Kara-Murza’s close friend and mentor, Boris Nemtsov, the leader of the pro-democracy opposition, was gunned down in 2015 a few hundred meters from the Kremlin three months and a day before Kara-Murza’s near-fatal illness. Yet Kara-Murza continued to go back, crisscrossing the country for the Open Russia nongovernmental organization, meeting with pro-democracy activists and screening a terrific documentary he made about Nemtsov.

“This past April, he returned to Moscow less than a month after another leading critic of the Kremlin, Alexei Navalny, began serving his nine-year sentence.

“Why risk his life, again and again, going to Putin’s Russia and leaving behind his wife Zhenya and their three young children in Centerville in Northern Virginia? His answer to me in private was the same as the one I recall him giving publicly: ‘Why should I be afraid?” he said. “It is they, Putin and his henchmen, who should be afraid. Why should I leave Russia? It is they who should leave while the going is good.”