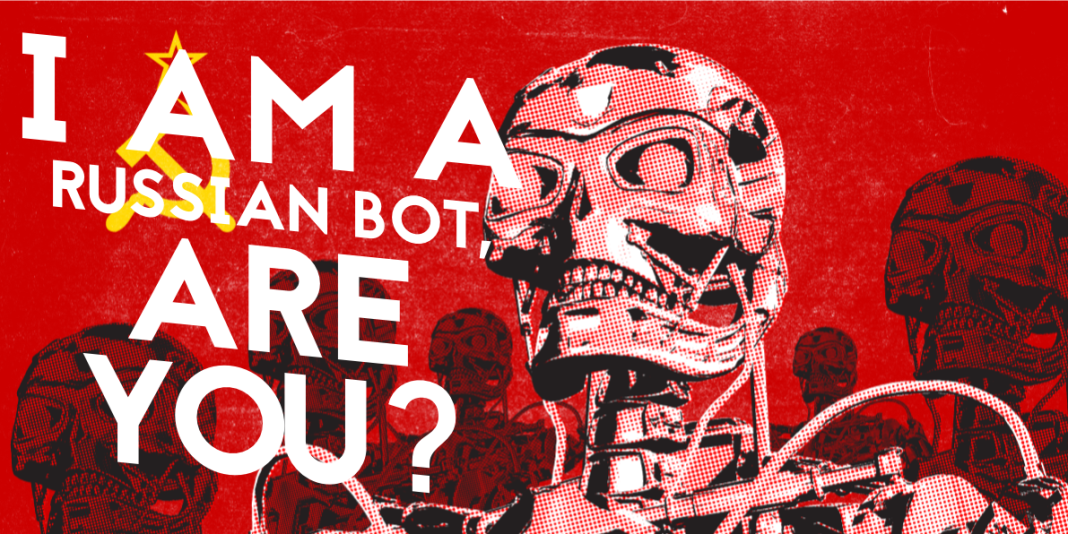 The Ukraine war is the fault of the US, NATO, the EU and Ukraine itself rather than Russia, say Covid anti-vaxxers, according to a report published last week by the University of Vienna. This coincides with news that an Austrian doctor committed suicide following threats from vax militants with pro-Putin, neo-Nazi links in Germany.

Towns and villages throughout Austria were lit by candles as vigils of support expressed the nation’s sadness at the fate of Dr Lisa-Maria Kellermayr, 36, who was found at her practice last Friday.

Meanwhile the Vienna University report conclusively shows that Russian bots responsible for sending billions of anti-vax messages during the Covid period have changed their target and are now sending out anti-Ukraine propaganda. They have succeeded in reaching the same audience, but this time with a new message: blame Ukraine for being invaded by Russia.

“There is nothing logical to correlate these two groups. One doesn’t cause the other. But they share a cause: a transnational identity politics united in rejection of facts,” says Nicholas Grossman, professor of International Relations at the University of Illinois.

“To those saying this is because of Fox News and the Murdochs: The poll is from Austria, where the biggest sources of news are ORF (public broadcasting) and Kronen Zeitung (which isn’t Murdoch). There isn’t a single bogeyman you can blame this on. It’s a broader social phenomenon.”

Dr Kellermayr’s practice was at the  lakeside resort of Seewalchen am Attersee. Prosecutors told the media they found three suicide notes and were not planning to carry out a post-mortem. Among her persecutors, who began making her life a misery last November, is the  German Querdenker coronavirus conspiracy theory movement, known to have large support among anti-semite Nazi thugs and followers of QAnon.

Austrian medical representatives have called for greater protection for doctors because Dr Kellermayr had faced months of violent threats after being targeted for her public backing of vaccines.

Austrian police refused to help her so she was forced to spend €100,000 of her own money on security. Clasp knives were removed from several “patients.”

There have also been calls for laws against bullying and psychological warfare to be tightened, including making it easier to prosecute perpetrators in other EU countries, after at least two of the people believed to have targeted Kellermayr with death threats were identified as coming from Germany.

Austria’s profil magazine offers a brief insight into the current world view of those opposed to vaccination: “I will never oppose the Russian President. Not out of fear, but out of respect for him,” writes Walter in the Telegram group of MFG, the party that downplays Corona and rejects all protective measures.

“Even the clumsiest conspiracy theories reap the approval of the group: “The Ami started it. They wash their money clean in Ukraine, traffic in children and much more. The Russians (they have many relatives in the Ukraine) will never put up with it … that’s my attitude.” Philippa gets five thumbs up for this posting – there is no contradiction. For the sake of form, it should be mentioned: None of this can even be remotely proven,” writes Jacob Winter of Profil. 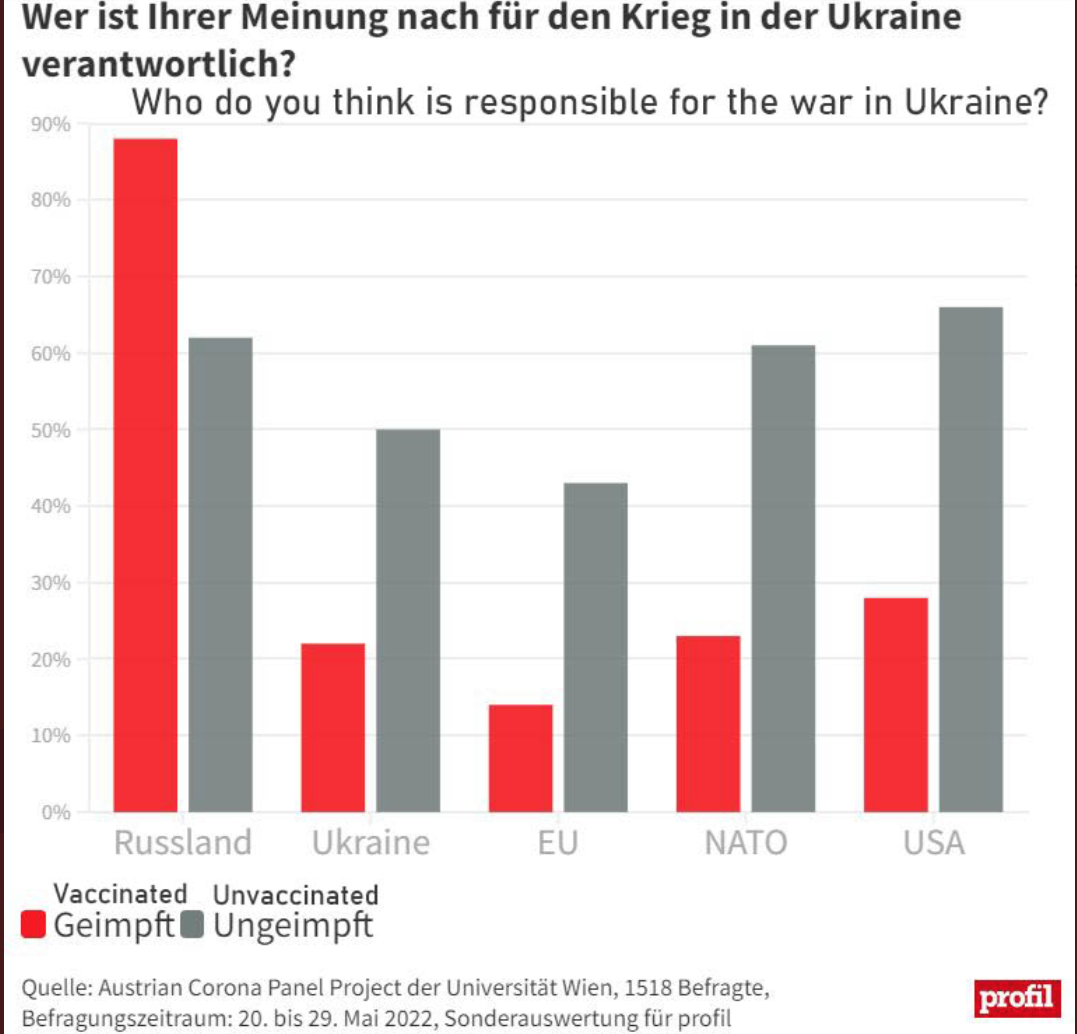 The link between anti-vaxxers and Putin backers has been noted before. At the anti-Covid demos, many of them waved white-blue-red flags, and alternative-right media platforms described the Russian war of aggression against Ukraine as entirely justified.

A University of Vienna survey, from the Austrian Corona Panel Project (ACCP), suggests that this way of thinking among the unvaccinated is capable of gaining a majority. Since the start of the pandemic, 1,500 people have been regularly interviewed about their willingness to be vaccinated and their attitude towards testing and compulsory masks. In the last wave of surveys for the time being – the funding for the Corona Panel recently expired – university researchers also wanted to find out whom Austrian blame for the Ukraine war.

Communication scientist Jakob-Moritz Eberl evaluated the results according to the vaccination status of the respondents. Russia, Ukraine, the EU, NATO and the USA stood as possibly to blame for the war. Multiple answers were allowed on the grounds that several conflicting parties can be responsible for a war. The result is clear: the vast majority of people who have been immunised against corona at least once or more blame Russia for the Ukraine war (88 percent). In contrast, a majority of 66 percent of the unvaccinated, who blame the USA.

“The conspiracy theory narratives about Corona and the Ukraine war are similar. It’s always about the fact that there are certain elites who lie to you. The basic building block of all conspiracy theories is anti-elitism,” says Eberl.

Were these people influenced by the MFG, the FPÖ and postings on Telegram – or were their positions already established beforehand?

Eberl: “We can’t say it very clearly with this data. You have to assume that both will happen. Citizens are more likely to use information sources that are consistent with their worldview. However, the more these sources dedicate themselves to the Ukraine war, the more likely it is that opinions will be influenced – especially among people who may not have had a solid position on this topic before.” Populism is promoted through elite bashing and a “good versus -Evil-Narrative” at least conspiracy belief.

The problem could get worse. Wars and crises promote the spread of conspiracy theories, they provide simple explanations for complex geopolitical contexts. Across Austria, around 30 to 40 percent of people are receptive to such stories. In addition, alternative media makers have a financial interest in spreading disinformation – and populists have a political interest.

The Austrian Corona Panel Project (ACCP) provided a long-term trend on the attitude of the population to the corona pandemic. The team from the University of Vienna would like to continue and expand the survey to current crises but alas the funding has run out. The social scientists do not want to be dependent on the government or just one federal state, they want the broadest possible cross-state funding to guarantee political independence.

In March a similar survey in Canada showed that unvaccinated citizens are about 12 times more likely than those who received three doses to believe Putin’s invasion of Ukraine was justified.

The poll found 26 per cent of those who identified as unvaccinated agreed the Russian invasion was justified, with another 35 per cent not offering an opinion. This compared to only two per cent of surveyed Canadians who said they had three doses of the COVID-19 vaccine and who supported the attack, and four per cent who offered no view.

Using troll farms that post on Facebook and other social media sites, the campaigns often target the minority of Canadians opposed to COVID-19 vaccines and vaccine mandates, and others deeply distrustful of government, said Philippe-André Rodriguez, deputy director of the department’s Centre for International Digital Policy.

The goal is to seed doubt about the official narrative around Moscow’s war, he said during a webinar organised by an Oxford University alumni group. “Russia seems to go back to groups that are predisposed to agree with some of its positions, or at least with the idea that Canada should disengage from whatever is happening in Ukraine,” said Rodriguez.

“That could be communities that already have a high level of distrust for the Canadian government (such as) having links with anti-vax communities,” he said. “(Russian operatives) are targeting these kinds of communities and making these links, saying the government is lying about COVID-19 and that they’re lying at the same time when it comes to Ukraine…. We’ve seen that quite a bit.”

Rodriguez also said Russian disinformation is being amplified by social media sites’ algorithms, which may require some kind of government intervention to counter. One outside expert said the official’s comments were a rare example of the government publicly accusing the Kremlin of such tactics, though Moscow’s disinformation efforts have been well-documented for years.

“The government has been very, very reluctant to attribute these messages to any state actor,” said Marcus Kolga, head of the group DisinfoWatch. “I guess it took a war to find the courage to speak out publicly and identify the Russian government.”

In his hour-long presentation, Rodriguez made a distinction between misleading statements issued by Russian politicians and pro-Kremlin media, and disinformation. He defined the latter as covert attempts to undermine faith in liberal democracy and institutions and to artificially intensify divisions in society.

Mother Jones – how to Bot Spot

The Guardian – Australia, how the same is happening Down Under