Turkish president Recep Tayyip Erdoğan is threatening to bounce Finnish and Swedish membership of Nato, on the grounds that he does not have a “positive opinion” of the two Nordic nations.

They have expressed a keen wish to join after Russia’s invasion of Ukraine in February but Erdoğan says they are “home to too many terrorist organisations” to warrant membership.

His remarks came as a Swedish parliamentary security review said membership would reduce the risk of conflict in northern Europe and a day after neighbouring Finland said it aimed to join the alliance, according to the Guardian.

Finland and Sweden, while both Nato partners, have long viewed membership as an unnecessary provocation of Russia. Moscow’s invasion of Ukraine has led to a radical rethink. Membership of Nato would require ratification by all existing members, and Erdoğan remarked to journalists after leaving Friday prayers in Istanbul that Turkey would not welcome either of them.

“We don’t feel positively about this,” he said.

Turkey has been a Nato member since 1952 and its membership remains a cornerstone of its foreign policy towards western countries. Erdogan’s comments appeared directed at the Kurdistan Workers’ Party (PKK), which Turkey regards as a terrorist organisation, although they appeared to include the communities of Kurdish origin in Scandinavia as a whole.

“Scandinavian countries are like guesthouses for terrorist organisations, ” he said. “To go even further, they have seats in their parliaments too.” 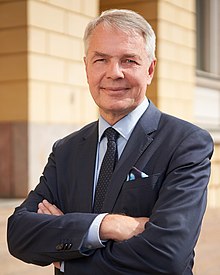 Sweden has a large Kurdish diaspora, and prominent Swedish citizens of Kurdish origin currently include six MPs, though Ankara has produced no evidence for claims they have links with the PKK or similar groups outside Sweden.

Finland’s Kurdish-speaking population was estimated at just over 15,000 people as of 2020, less than 0.3% of the population. Finland’s foreign minister, Pekka Haavisto, today urged patience and called for a gradual approach in response to Turkey. “We need some patience in this type of process, it’s not happening in one day … Let’s take issues step by step,” he told reporters.

Finland’s prime minister, Sanna Marin, and president, Sauli Niinistö, on Thursday said the country “must apply for Nato membership without delay”. Government confirmation of the decision is expected on Sunday, with parliamentary assent likely early next week.

Sweden’s ruling Social Democrats will also decide whether to formally approve joining Nato on Sunday and are widely expected to drop decades of opposition to membership. Parliament will debate security issues on Monday.

The security review published today did not make a recommendation but said developing defence alliances outside existing structures was unrealistic. “Swedish Nato membership would raise the threshold for military conflicts and thus have a conflict-preventing effect in northern Europe,” said the country’s foreign minister, Ann Linde, presenting the report’s conclusions.

“The most important consequence of Swedish membership would be that Sweden would be a part of Nato’s collective security and included in security guarantees according to Article 5,” she said.

Article 5, the cornerstone of the Nato alliance, commits all its 30 members  to defend each other in the event of armed aggression on any one of them. The Swedish report, due to be debated in parliament on Monday, noted that “within the framework of current cooperation, there is no guarantee that Sweden would be helped if it were the target of a serious threat or attack”.

The daily Expressen has reported that a special cabinet meeting will be called after Monday’s parliamentary debate, with prime minister Magdalena Andersson likely to send Sweden’s membership application to Nato by the end of the day.

Not all the ruling Social Democrats’ party members are automatically in favour. “I think everybody would have wanted more time for this, because it’s a huge issue,” Stefan Löfven, prime minister from 2014 to 2021, told Agence France-Presse.

Moscow has previously warned that Finnish and Swedish Nato membership would force it to “restore balance” by strengthening its defences in the Baltic, including by deploying nuclear weapons in Kaliningrad, between Poland and Lithuania.Linde noted that Finnish and Swedish Nato membership would be considered “negative” by Russia. She said neither country expected a “conventional military attack” in reaction but added that “an armed assault cannot be ruled out”.

Swedish defence minister Peter Hultqvist said: “If Sweden chooses to seek Nato membership, there is a risk of a reaction from Russia. Let me state that, in such a case, we are prepared to deal with any counter-response.”

Public support for Nato membership in Finland, which shares a 1,300 km border with Russia, has more than trebled to about 76% since Russia’s onslaught on Ukraine, and has risen to about 60% in Sweden.

Nato secretary general Jens Stoltenberg has said both countries would be “welcomed with open arms” and that the accession process would be quick, although formal approval by all the alliance’s members could take several months.

♦ Reuters: US working to clarify situation