After Putin, the German hegemon? 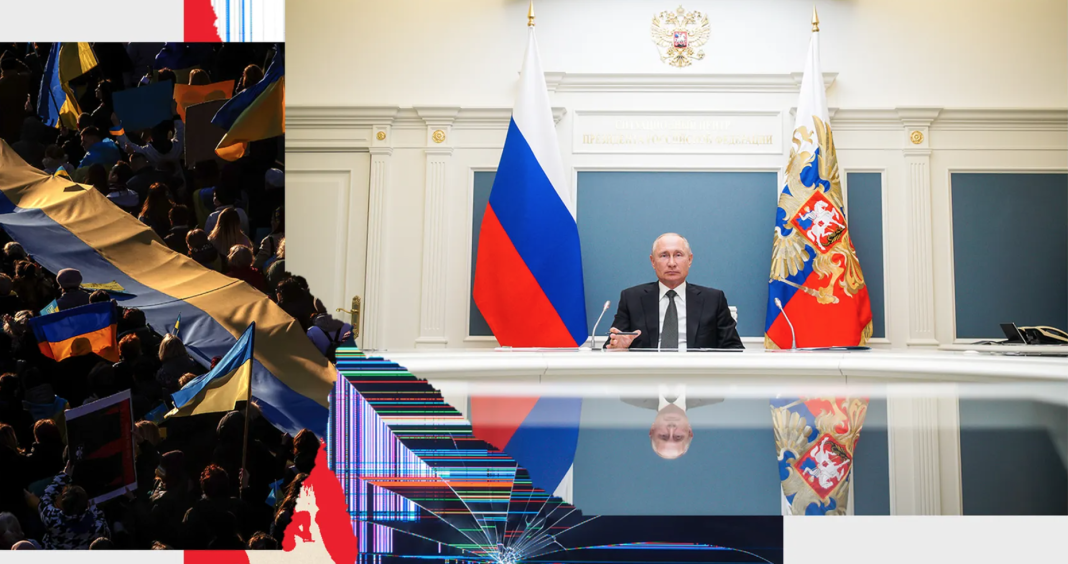 Once the truth about Ukrainian resistance and the magnitude of Russia’s economic and financial isolation and military losses spreads beyond the inner regime and beyond Russia’s educated and social media strata, the Putin regime will struggle to retain their totalitarian control.

The sudden transition from all-powerful man of destiny to Wizard of Oz has happened before. After two decades of increasingly authoritarian “vertical power” Russia is still without an institutional method of transferring power, or indeed genuine democratic institutions of any kind. The underlying brittleness of Putin’s highly personal regime is even more extreme than its Soviet predecessor.

But Putin’s successors will face a very different external environment. Contrite Western governments, finance and business people have been falling over themselves to undo decades of kow-towing. Putin’s all-out invasion of Ukraine removed the scales fell from western, but especially German eyes.  Until now Germany’s deep sense of shame for the second world war, gratitude for re-unification and the sheer mutual profitability of Russian oil, gas and raw materials in exchange for German trains, cars, trucks, machine tools led to deep reluctance to stand up to Russia’s increasing arrogance.

Western companies generally were only too willing to confirm Lenin’s cynical but accurate one-liner “the capitalists will sell us the rope to hang them.” Not to speak of Londongrad, extreme symbol of democracies’ willingness to collude in the subversion their own laws, institutions and morals which helped convince Putin of western weakness and hypocrisy.

Three weeks after war erupted however the world is already a different place. The strength of Ukrainian resistance and the inspired leadership of Volodymyr Zelensky has created a willing nation in arms. The comparison with Putin’s cowed civil society and the performance of Russia’s psychologically unprepared and misinformed armed forces is transparent. Russia has already lost the war, no matter how long it drags on before Putin is removed.

Ironically, apart from continuing to help Ukraine in every way short of open conflict with nuclear Russia, the West’s top priority now should be preparing ways to help post-Putin Russia avoid collapsing into the sort of moral, political and economic collapse that followed the disintegration of the Soviet world. An up to date version of Marshall Aid which helped Europe recover after 1945 would be much better than punishment and reparations which weakened the Weimar republic and led to Hitler after Versailles.

Had Germany especially, but also most other European NATO members, fulfilled their obligations, Putin would probably not have been fatally attracted by our perceived weakness. By all means we should bring our armed forces up to a reasonable state of readiness. But the policy focus post-war surely has to be helping Russians create the more open, prosperous society they tried but failed to create after the collapse of communism.

While acknowledging that Russians are often their own worst enemy, that their self-pity and tendency to blame others for their own mistakes and weaknesses are deep rooted and difficult to deal with, it would be a huge mistake to isolate, punish and build a sort of fortress Europe around them.

Once the war is over, Putin and his fellow conspirators, should face trial for war crimes, no doubt. Russians themselves will have to face up to the fact that the war in Ukraine was waged in their name, by their armed forces, and as a result they face a Europe united against them and the prospect of a dramatic collapse in their already declining living standards.

Russia’s failure to honestly face up to its traumatic, murderous recent history, as Germans tried to do after the war, is what leads to the recurrence of oppressive regimes. Putin tried to rehabilitate and emulate Stalin. For Russia to be helped, Russians themselves must finally face up to the truth of the horrors committed in their name, not only in Ukraine now, but also on their neighbours, and above all on themselves.

Let us imagine that the truth about Ukrainian resistance and the magnitude of Russia’s economic and financial isolation spreads beyond Russia’s educated and social media addicts and leads to the collapse of support for the Putin regime.

The sudden transition from all powerful man of destiny to Wizard of Oz has happened before. Centuries of Romanoff rule ended with the stroke of a pen at Pskov railway station in February 1917. Six months later neither the Grand Dukes nor Kerensky could prevail against the background of military defeats. Lenin seized the chance to pick up power lying in the gutter. I witnessed the sudden implosion of the Soviet regime after the failure of the plot against Gorbachev in August 1991. Ten years later Putin was handed power by an ailing Yeltsin.

After two decades of increasingly authoritarian “vertical power” Russia is still without an institutional method of transferring power, or indeed genuine democratic institutions of any kind. But the splendid isolation of Russia’s apparently all-powerful uber-Czar masks a regime whose underlying brittleness is even more extreme. I would put money on the probability that Putin will fall sooner rather than later.

But Putin’s successors will face a very different external environment. Shamed by the strength of Ukraine’s resistance, contrite Western governments finance and business people have been falling over themselves to undo decades of kow-towing.

Putin’s re-integration of Belarus and Kazakhstan, and potentially Ukraine, into the Russian sphere of influence faced Nato with the prospect of a several thousand kilometre long Cold War type border to defend, and underlined the vulnerability of the 60km wide Suwalki gap between militarised Kaliningrad and the Baltic states.

Suddenly the scales fell from western, but especially German eyes. Until now Germany’s deep sense of shame for its behaviour in the second world war, gratitude for re-unification and the sheer mutual profitability of importing Russian oil, gas and raw materials in exchange for German trains, cars, trucks, machine tools led to deep reluctance to stand up to Russia’s increasing arrogance.

Rather as Stalin continued to send train loads of oil, metals, grain and other commodities to Nazi Germany until operation Barbarossa began in June 1941, Germany marked time on Nordstream2 and business as usual until days before Putin began his war on Ukraine with the formal incorporation of Luhansk and Donetsk.

Not only German but western companies generally were only too willing to confirm in Putin’s eyes Lenin’s deeply cynical but accurate one-liner “the capitalists will sell us the rope with which we’ll hang them.” Not to speak of Londonograd, extreme symbol of western societies’ willingness to collude in the subversion of their own laws, institutions and morals which helped convince Putin of the weakness and hypocrisy of the West.

But it was the shock decision of Germany’s new Chancellor, Olaf Schulz, to apologise for Germany’s weakness and invest €100bn in modernising and expanding Germany’s armed forces which could turn out to be the really serious factor of change. It implies that not only is Germany prepared to strengthen Nato but assume the more of the burdens and responsibilities required to take on the role of European superpower.

Some 77 years after a defeated and shattered Germany surrendered and was occupied by the soon to be bitterly divided allies, Europe’s richest and most populous European state now seems poised to take on the responsibility of leading the European Union. It is also promising to field modernised conventional forces inside the Nato alliance alongside the US and Europe’s two nuclear armed states, France and the UK.

Germany’s emergence as the European hegemon is a real game changer. Hopefully the removal of Putin and his siloviki backers, and a more united EU, will lead to a renewed and more intelligent and informed Western partnership with a non-belligerent Russia, once it has retired from Ukraine, Crimea, Luhansk, Donetz, Belarus, Transnistria, Abhazia and Ossetia.

If not, a demoralised, impoverished Russia cut off from Europe would have no alternative but to become even more of a vassal to China. Although neither Germany nor other Western countries have had the time to think this through, post-Putin the EU will have to change radically the way it operates and enlarge to include not only Ukraine and a post-Lukashenko Belarus, but also the West Balkan states, Albania, Serbia, Bosnia and Kosovo.

In brief, if Putin’s war leads to his removal from an isolated Russia, we will have to rethink the whole way in which Europe is organised and thinks of itself. An enlarged Europe with Germany as its willing and acknowledged leader calls for a total re-think of the Maastricht formula of ever closer union and a one size fits all Euro monetary system.

The best brains available should be called on to work out the future shape of a new and necessarily more confederal structure, one which could also prove attractive to the UK. An all-inclusive European confederation would have to be based on the huge variety of nation states being responsible to their own taxpayers and voters.

The richer EU states, especially Germany, already played a hugely constructive role through investment, loans and advice to the former Comecon countries and Baltic States which allowed them to modernise and raise living standards dramatically. The EU membership to which Ukraine and others aspire gave the new members access to European markets, including labour markets. Further enlargement should continue this mutually profitable process.

The Euro. Europe needs to try again, with feeling

A Germany which has benefitted more than any other state from the EU and the uber-competitiveness bestowed by an under-valued currency, and is now willing to play a constructive hegemonistic role will need to pay more than its fair share for such enlargement.

The hardest thing will be to persuade 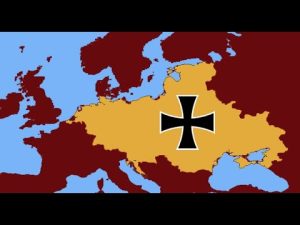 Germany that the one size fits all Euro system needs to be drastically reformed. The US does huge amounts of trade with Canada and Mexico, as does Australia with New Zealand. But they all have their own currencies which act as shock absorbers and provide flexibility.

A better monetary system for an enlarged Europe would involve a return to national currencies, although several hard currency- rich North European countries – Benelux, Finland and even the Baltic states and possibly Poland – could well informally link their currencies to a re-born German mark, modelled on the voluntary D-mark zone arrangement of pre-Euro years.

Of course, all the above is mere speculation and will remain so until Putin is removed and his war of aggression is reversed. The point I wish to make is that the post WW2, Post-Soviet collapse world is now obsolete and we need to think hard about how to create a better Europe and a thorough reform of the corrupted Londonograd syndrome.

These are thoughts I have been mulling over for many frustrating years as the West failed to listen to what Putin was saying and doing. Five years ago I tried them out on a German friend in Almaty, then commercial, financial and cultural capital of a sovereign independent Kazakhstan. Its corrupt government has now become a Russian protectorate after Putin sent in 19 plane loads of Spetznaz in support of a President waging an internal power struggle.

“Germany needs to field another armoured Panzer division” I argued to my German friend over lunch. He was deeply shocked. “Surely you do not forget how bad-mannered Germans can be when they are well armed!” he replied. Last week he emailed: “The invasion of Ukraine has turned me from dove to hawk.”