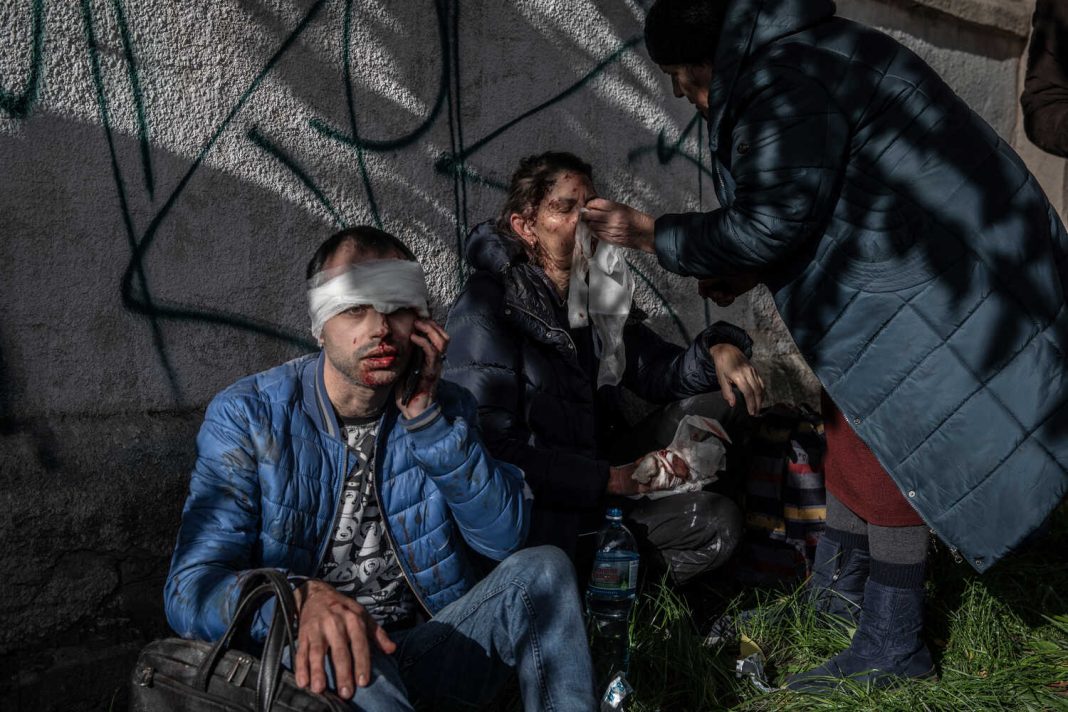 “All designated targets” have been hit in a massive missile attack on Ukrainian military, communications and energy infrastructure on Monday, according to the Russian Ministry of Defence.

However Ukrainian President Volodymyr Zelensky saw it differently: the strikes, which hit the centre of Kyiv and several other Ukrainian cities, showed Russia was trying to “wipe us off the face of the earth,” he said.

Plunging cities into darkness and blowing up water supplies are intended to create pandemonium and fear as winter looms, even though it is unlikely to have any immediate effect on the fighting. Lights flickered off in multiple cities on Monday, as local authorities resorted to rolling blackouts to avoid overloading backup electrical lines.

It is a return to the bloody, destructive playbook from Syria with a barrage of rocket attacks against civilian targets across the country, ramping up pressure on Western allies to supply Kyiv with the air defences it has long sought. The brutality of the attacks came as little surprise, given that Putin has just appointed Sergey Surovikin, the man in charge of Russia’s genocidal forces in Syria 2017-20, as commander of his struggling war effort in Ukraine.

Surovikin claimed at the time he was “defending” Moscow’s interests in Syria. This involved dozens of air and ground attacks on civilian objects and infrastructure, according to a 2020 Human Rights Watch report, which said Russian forces under his command struck Syrian “homes, schools, healthcare facilities, and markets – the places where people live, work, and study”.

It took him just two days in the new job to bring his Syrian playbook closer to home, with a flurry of rocket attacks against civilian targets  which included a major road junction next to a university and a children’s playground in a park..

A Ukrainian spokesman said the rush-hour attacks this morning in eight regions appeared to have been deliberately timed to kill civilians and create panic and fear, and accused Russia of terrorism.

Earlier, President Vladimir Putin said the attacks were retaliation for what he called Ukraine’s “terrorist attack” against a vital bridge linking Russia to the annexed Crimean peninsula. He promised a “harsh” response to any further such attacks.

Olena Zelenska, the Ukrainian first lady, paid tribute to her nation’s resilience in a Twitter post accompanied by a video of civilians singing together as they sheltered in the subway.

“Russian missiles massively hit Ukrainian cities and our children must hide in the subway once again. They are trying to intimidate and break us – but Ukrainians sing. Truth is on the side of our nation. Ukrainians are not afraid, they know: enemy is mad because we are winning,” she writes on her Twitter feed.

It also seems that Putin is attempting to strong-arm the Belarus leader Aleksandr Lukashenko into taking an active role in the war following a weekend meeting in St Petersburg with the Russian leader.

Although Biden did not announce new measures from the United States or its allies in response to the attacks he reaffirmed his commitment to assist Ukraine in its war with Russia in a short written statement.

“These attacks only further reinforce our commitment to stand with the people of Ukraine for as long as it takes,” Biden said.

The American president is expected to attend a virtual meeting on Tuesday of the leaders of the Group of 7 nations, which includes the United States, Canada, Japan, France, Germany, Italy and the United Kingdom. The group will discuss the missile attacks and the latest developments in Ukraine, according to a European Union official. 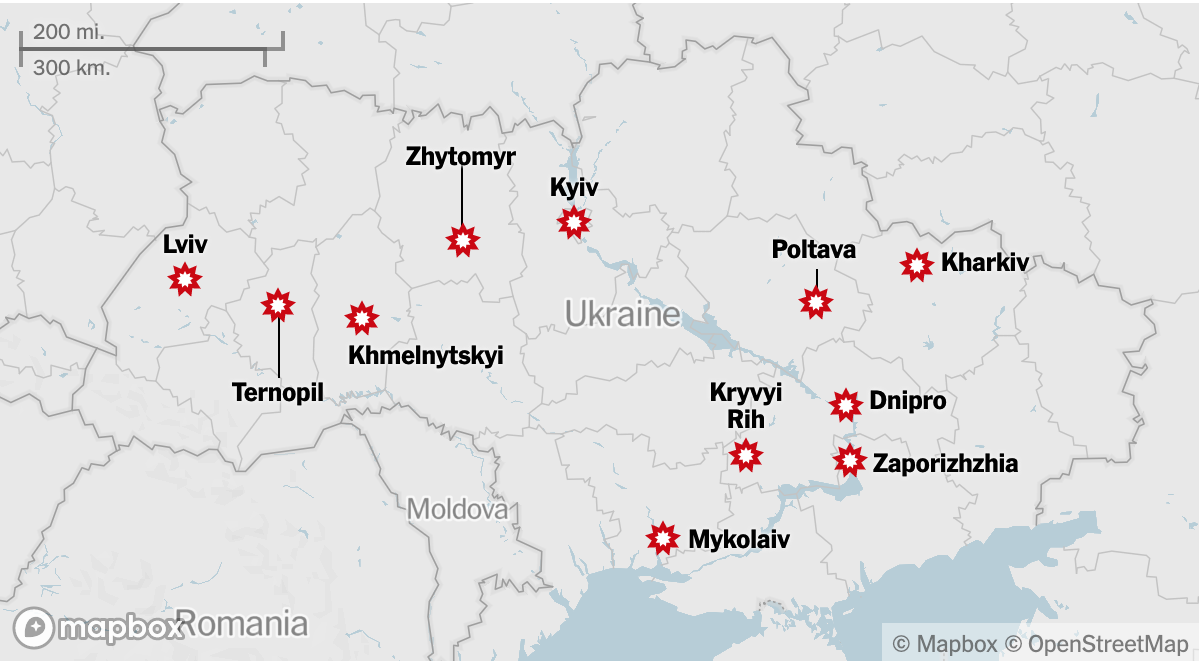 For months, Russia’s state media insisted that the country was only hitting military targets in Ukraine, leaving out the suffering that the invasion has brought to millions of civilians.

On Monday, the mask came off. Russian state television showed gas lines in Ukraine, empty store shelves and a long-range forecast promising months of freezing temperatures there. And rather than focus on the civilian destruction in Russian-held areas as they usually do, news broadcasts in Russia showed columns of smoke and carnage in central Kyiv.

“There’s no hot water, part of the city is without power,” one anchor announced, describing the scene in the western Ukrainian city of Lviv.

All is which is a clear indicator that Putin, sensing domestic pressure over Russia’s flailing war effort, felt a decisive show of force is now necessary.

Gung-ho Russian hardliners in favour of the war have been withering in their criticism of his lack of military prowess and failure to be aggressive enough. A claque of raucous critique reached fever pitch following Saturday’s attack on the 12-mile Kerch bridge to the annexed Ukrainian peninsula of Crimea. The crippled bridge, left dangling in the Black Sea, is a potent symbol of Putin’s foreign policy.

For the moment the hardliners have piped down and Putin’s pecker is marginally up.

“This is important from the domestic political perspective, first and foremost,” Abbas Gallyamov, a Russian political analyst and former Putin speechwriter, said of Monday’s strikes. “It was important to demonstrate to the ruling class that Putin is still capable, that the Army is still good for something.”

But the escalation is also a desperate gamble: Putin is betting that Russian elites — and the public at large — do indeed see it as a sign of strength, rather than a desperate effort to inflict more pain in a war that Russia appears to be losing, reports the New York Times.

“The response was supposed to show power, but in fact it showed powerlessness,” Mr. Gallyamov said. “There’s nothing else the army can do.”

After Monday’s strikes, some of the invasion’s harshest critics among the Russian hawks declared that the military was finally doing its job. The strongman leader of the Chechnya, Ramzan Kadyrov — who recently excoriated the army’s “incompetent” leadership — said in a Telegram post that he was now “100 percent happy” with the war effort. “Run, Zelensky, run,” he wrote.

Other cheerleaders of the war triumphantly recalled Mr. Putin’s declaration in July that Russia had not “started anything yet in earnest” in Ukraine.