EXCLUSIVE: KYIV, Sept 16, 22  (Reuters) – President Volodymyr Zelensky accused Russia on Friday of committing war crimes in Ukraine’s northeast and said it was too early to say the tide of the war was turning despite rapid territorial gains by his forces this month.

The Ukrainian leader also told Reuters in an interview that the outcome of the war with Russia, now in its seventh month, hinged on the swift delivery of foreign weapons to his country. 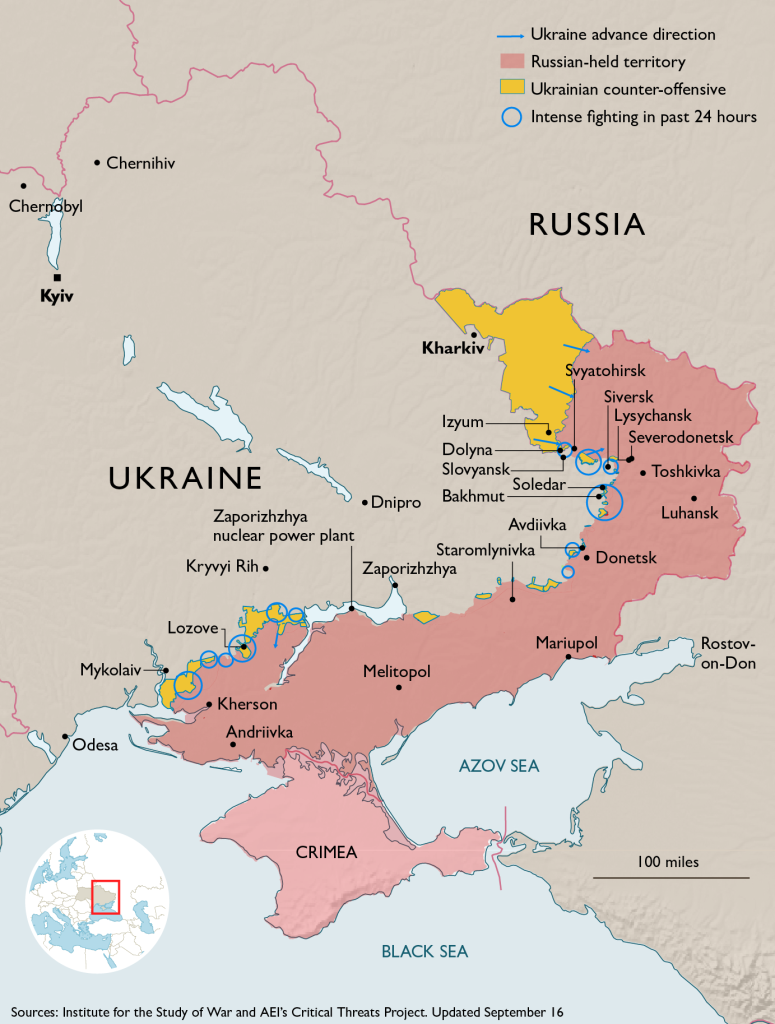 He compared the situation in newly liberated areas of the northeast “to the bloody soap opera after Bucha”, a town near Kyiv where he accused Russian forces of committing numerous war crimes in the first phase of the war. Moscow denied the charges. “As of today, there are 450 dead people, buried (in the northeastern Kharkiv region). But there are others, separate burials of many people. Tortured people. Entire families in certain territories,” Zelensky said.

Asked if there was evidence of war crimes, he said: “All this is there… There is some evidence, and assessments are being conducted, Ukrainian and international, and this is very important for us, for the world to recognise this.”

The Kremlin did not immediately respond to a request for comment on Zelensky’s new allegations.

Russia regularly denies targeting civilians during what it calls its “special military operation” in Ukraine and has said in the past that accusations of human rights abuses are a smear campaign.

The governor of Kharkiv region, Oleh Synhubov, told reporters on Friday at one of the burial sites in the city of Izium that some bodies exhumed there had been found with their hands tied behind their backs. read more

Moscow has not commented on the mass burial site in Izium, which was a Russian frontline stronghold before Ukraine’s counter-offensive forced its forces to flee.

Friday’s interview took place in the president’s office in the heavily-guarded government district, which is now like a citadel for Zelensky and his advisers. Sandbags were piled up in the windows of the building’s labyrinthine, dimly-lit corridors.

An air raid siren – used to warn of the danger of incoming missiles – sounded in Kyiv shortly before the interview.

Zelensky, who visited Izium on Wednesday, repeated his appeal forWestern countries and others to step up weapons supplies to Ukraine.

Zelensky also cited “certain psychological barriers” in Germany to supplying military equipment because of its Nazi past but said such supplies were vital for Ukraine to defend itself against what he called Russian “fascism”. He has often accused Berlin of dragging its feet over providing arms.

He lauded Ukraine’s rapid counter-offensive but played down any suggestion that the war was entering some kind of end game. “It’s early to talk about an end to this war,” he said.

Zelensky said he would only support the idea of reopening Russian ammonia exports through Ukraine, an initiative proposed by the United Nations, if Moscow handed back Ukrainian prisoners of war to Kyiv. read more

Speaking in Uzbekistan on Friday, Putin brushed off Ukraine’s counter-offensive with a smile, but warned that Russia would respond more forcefully if its troops were put under further pressure. read more

Zelensky said he had been convinced that foreign weapons supplies to Ukraine would have fallen if Kyiv had not launched its counter-offensive and that the territorial gains would impress other countries. “I think this is a very important step that influenced, or will influence, the decisions of certain other countries,” he said.

Asked on the 205th day of the war if he ever got a chance to relax, Zelensky said: “I’d really want the Russians to relax”. Dmytro Lubinets, an MP and human rights commissioner for the Ukrainian parliament, the Verkhovna Rada, said that an original estimate of 1,000 killed in the town from the Russian assault and occupation, given by the town mayor, was probably an underestimate.

“We can’t say an exact number as it’s still under investigation,” he said in the ruined central square, while visiting the scene. “But we can see there are a lot of people missing.” The authorities believe that the mass burial site contains more than 450 bodies.

Izyum was a key point between the Donbas, the area already under Russian control at the start of this year’s invasion in the east of the country, and Kharkiv, Ukraine’s second city. The Russians needed the town both to press an assault on Kharkiv and to protect the front they were developing to seize Ukrainian-held cities to the south-east like Severodonetsk.