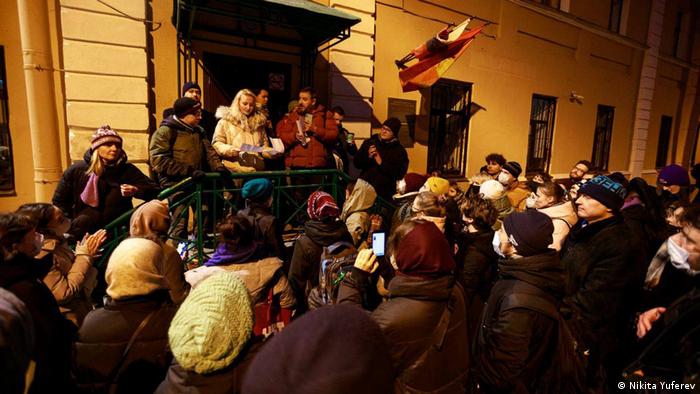 Eurotopics has collected a good spread of press reactions to the calamities affecting Putin’s “special operation” under the headline Is Putin coming under domestic pressure?

Critical voices are growing louder in Russia: local politicians are collecting signatures demanding Putin’s resignation and even pro-Kremlin media are somewhat sceptical about the conduct of the war. Yet according to official data, the candidates of Putin’s party won a clear victory in regional elections last week, although observers see numerous indications of fraud. Commentators discuss the significance of these developments.

Good to see Ria Novosti in Moscow is keeping the flag flying as the Russian army heads home “like Olympics athletes” (FT). Its headline:

“People are already beginning to talk of ‘collusion’ and ‘betrayal within the leadership’. … Regardless of the fact that defeatism, an apocalyptic mood and panic are also being stirred up by our military opponents, we need not fear a repeat of the 1915 to 1917 scenario – when in the course of the war the Russian state was overthrown from within because a large section of society was in the grips of a crazy idea about ‘stupidity or betrayal’ within the leadership. Confidence in Vladimir Putin remains at a very high level – as does the belief that the commander-in-chief is determined to win a victory.”

Another Medvedev, political scientist and writer Sergei Medvedev,  reflected ominously on Facebook: “Now Russia’s satellites are tottering. There will be more tremors on the periphery of Russian power. It seems to me that with the progressive dissolution of all combat-ready units of the Russian army, interesting times await us in Abkhazia and South Ossetia.

“If I were Georgian, I wouldn’t waste any time. … Little by little, the belt of pirate territories from the Terek to the Memel, painstakingly conquered and bolstered by Russia over the last 30 years, is crumbling: Ossetia, Abkhazia, the Luhansk People’s Republic and Donetsk People’s Republic [the separatist republics in eastern Ukraine], Crimea, Transnistria, Belarus – not to mention Chechnya. … The strategic lame ducks in the Kremlin have no idea what a Pandora’s box they opened on 24 February.”