Autumn thoughts from the Polish mountains

The AEJ’s honorary president spent the last few days as a speaker at the “Polish Davos”. The event was a barely-disguised dress rehearsal for the 2023 Polish election campaign by the high-ups of the ruling PiS (Law and Justice) party’s Eurosceptic Polish government. What is left of the opposition was also there, but mostly not invited.

Otmar Lahodynsky, a veteran reporter of Solidarnosc’ rise and fall in the 1980s and 1990s, describes the curious oil-and-water atmosphere of the debates.

I was a guest at the 31st Economic Forum in the pretty Polish ski-resort of Karpacz, in the southwestern Krkonoše Mountains at the foot of the Krkonoše Mountains from September 6 to 8. Seminars and panel debates were held with hundreds of participants on topics ranging from the Ukraine conflict to the energy crisis, to Poland’s economic and political situation, to the future of Europe.

The “Eastern European”, or “Polish Davos“, as it is often called, has been taking place for 31 years and is the largest political-economic forum in Central and Eastern Europe. Poland is evidently the focus here, and not just because parliamentary elections are coming up next year. So Polish politicians dominated, first and foremost Prime Minister Mateusz Morawiecki as head of the right-wing conservative government led by the PiS (Law and Justice) party and PiS leader Jaroslaw Kaczynski.

There were only a few parliamentary deputies from the main Civic Platform (PO) led by Donald Tusk However, the pro-European New Left party even had its own panel dedicated to it. Several debates dealt with the situation in Ukraine. The prolific Ukrainian author, poet, and philosopher Oksana Zabushko presented her latest book. (She is best known for The Museum of Abandoned Secrets, dealing with three different epochs (World War II, 1970s, and early 2000s), and, in particular, the topic of Ukrainian Insurgent Army, active in Ukraine in the 1940s and 1950s, and either demonized or silenced by the Soviet historiography.)

Poland has taken in several hundred thousand refugees from Ukraine since the beginning of the war in 2014. The Ukrainian flag can be seen in front of all public buildings as a sign of solidarity. It was almost a matter of honour that the Ukrainian band Kalush Orchestra, who won the Eurovision Song Contest last year, also gave an acclaimed concert here at the Economic Forum.

An exhibition by the famous Israeli photographer Ron Haviv with photos from the first days of Putin’s invasion of Ukraine reminded visitors of the war just a few hundred kilometres east of here.

What bothered me all the more about Prime Minister Morawiecki’s speech was that it was purely about domestic elections. He also justified demands for compensation from the German government, an issue which invariably always comes up before Polish elections.

Witold Wilczynski, professor at the University of Krakow for Global Politics, pointed out to me that Poland, first occupied by the Nazis in 1939 and later largely destroyed, renounced reparations from Germany in 1953 under pressure from the Soviet Union.

Sociologist Adam Podgórecki, who has published on morality in politics, does not believe that Poland will ever receive money from Germany. “Poland’s politics and society are so polarised that the German government can always back one of the two opposing camps. For such demands, it would need a national closing of ranks. From a purely legal point of view, the German government can of course refer to Poland’s official renunciation in 1953.”

Therefore, only the PiS government will make representations in Berlin. And there is already even a separate ministerial office for it. Jacek Kurski, the head of Poland’s public radio and TV (Telewizja Polska), who resigned on Monday and was brought into line with PiS, is being considered as a candidate.

He vigorously transformed the public broadcaster into a government propaganda channel from 2016 onwards and fired many left-wing and liberal journalists. In the 2020 election campaign, Rafal Trzaskowski, the opposing candidate to the incumbent president, Andrzej Duda, was almost always reported negatively, if at all. The Polish AEJ section proved this in detail in a study.

And at the height of the Corona wave, the presenter of the popular hit parade on Radio 3 also threw in the towel. Because a song by the Polish singer Kazik, who – without mentioning him directly – made fun of Kaczynski’s visits to the cemetery during the ban otherwise in force because of Covid 19 (Twój ból jest lepszy niż mój– “Your grief is better than mine”) had been voted No. 1 in the hit parade. But then the song had to be ranked lower due to pressure from the government.

Jaroslaw Kacynski devoted his panel primarily to values in politics. He named patriotism, love of one’s homeland, religiosity, and national identity as the most important cornerstones of his vision.

He did not mention values anchored in the EU Treaty of Lisbon, presumably because cultural diversity, freedom of the media, and a ban on discrimination with regard to sexual orientation are mentioned there, among other things. Poland’s bishops have railed against the “rainbow danger” in sermons, putting it on a par with the threat posed by the Communist regime.

With a new law on the “repolonisation” of foreign-owned media, almost all regional newspapers owned by a Bavarian publishing house were brought into the possession of the Polish oil company Orlen. The critical TV station TVN, owned by the US Discovery corporation, only narrowly escaped a forced sale.

In an inn named after the mountain spirit “Rübezahl”, I met the Polish MEP and PiS politician Zdzisław Krasnodębski, again. The sociology professor has been a repeated guest in Vienna. And he pointed out to his prominent neighbours at the table, including a former foreign minister of Poland, that I had pestered him with questions about Poland’s conflict with the EU at an event on the new edition of the book Mitteleuropa-Revisited by Erhard Busek and Emil Brix.

“I still remember Austrian politicians who demanded of Poland that we should be nicer to Putin,” Krasnodebski scoffed. “Now it turns out that we were in 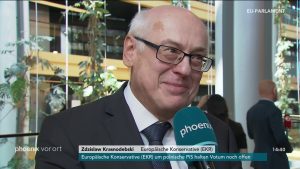 the right and thankfully disregarded these demands from Vienna.” He sees the Polish opposition as a rallying point for ex-Communists. After the fall of Communism in 1989, they introduced a neo-liberal economic policy with the support of Solidarnosc functionaries, he said.

The twins Lech and Jaroslaw Kaczynski successfully wrenched the Left off the levers of power in Poland. Krasnodebski’s assistant proudly points to the new platform of right-wing conservative ideas co-founded by the MEP. It is called deliberatio.eu and is dedicated – in English – primarily to Poland’s conflict with the EU: “Let the EU once again be a Europe of Homelands, a Europe of Nations, not a super-state dominated by utopia – one doctrine and one leadership”, writes Antoni Libera in the essay “Poland versus the EU”.

In the essay “Billionaire Socialism”, David Engels goes against everything on the left: “Liberalism and socialism in their actually existing form are no longer to be thought of as fundamental opposites, but rather as converging forces that argue from different starting points, but ultimately share a materialistic image of man that can be attributed to the same ideological school”, writes Engels.

In any case, the PiS government wants to continue to keep the left-wing opposition out of power. The incumbent national-conservative government has announced the distribution of new financial gifts before the 2023 elections. From family allowances and child benefits to compensation for inflation – the inflation rate in Poland has risen to over 16 % –  will be distributed. In a similar way, Viktor Orbán secured his re-election in Hungary last year.

But unlike in Hungary, there are still independent media in Poland. In Karpacz, the daily newspaper Rzespospolita had set up its own marquee for debates. It generally reports in a balanced way about the government, often also critically. In contrast, the daily newspaper Gazeta Wyborcza, which emerged from ex-President Lech Wałęsa’s Solidarność ovement, was punished by the government with a ban on advertising and subscriptions in public places.

For the last two years, SLAPP attacks (“Strategic lawsuits against public participation”) have also been increasing in Poland against non-compliant journalists and media. For example, Polish Newsweek was sued for millions after a report about high profits from a Polish company’s sale of Covid protective masks. A former editor of Polityka magazine was silenced with several libel suits at once.

As a participant in the panel debate Journalism-Evaluation or Devaluation, I pointed out the growing number of SLAPP lawsuits throughout the EU. However, the EU Commission’s planned directive will only cover cross-border cases. Under my presidency, AEJ demanded further regulation for lawsuits a single member state.

At my panel, journalism professor Jacek Wasilewski called for some kind of licensing exam for journalists to “teach basic skills, similar to a driving licence”.

I strongly warned against this. After all, who is going to administer the licensing exam? State agencies could ensure a selection that suits the government. And admission via journalism institutes would restrict the professional background of journalists too much, I warned, referring to doctors or writers among journalists.

Malgorzata Prokop-Paczkowska had been fired by the Polish Broadcasting Corporation in 2006 and then became a member of parliament. “Public television broadcasts mainly government propaganda” she pointed out. “There are hardly any programmes of educational or cultural value there anymore. And they also broadcast a lot of commercials, almost more than the private channels.”

We agreed on another of Prof. Wasilewski’s demands: young people should receive media education in schools so that they learn to distinguish true reports from fake news. And I couldn’t help taking a side swipe. Perhaps the journalists fired by the PiS government could serve as teachers?