What’s going on in Vlad’s head?

Political philosophy has rarely been a strong selling point for Europe’s “red-top” boulevard press. So the article below in Austria’s best-selling (circulation over 800,000) Kronen Zeitung is rare.

It tries to explain how Putin arrived at the bloody, ridiculous, and blatantly fascist thinking behind his grisly war of attrition against Ukraine and the West in general.

Now into its sixth month, the war threatens to disrupt the economies of the entire planet, and today has a good chance of unleashing another Chernobyl nuclear disaster in Europe – experts from the IAEC in Vienna are today on their way to Zaporizhzhia….

from the Kronen Zeitung:

Who’s “whispering” in the ear of the Kremlin boss?

Conservative Russian philosophers, a bit of tsarism and religious moral concepts from the day before yesterday characterize the actions of Russia’s president. Vladimir Putin has cobbled together his own ideology over the years. In short: the moral, genetic and social superiority of Russia that needs to be defended against the West.

Core elements are Russian history and patriotism. Putin admires Tsar Peter the Great (1672–1725), who “brought back Russian soil” during the war with Sweden. An argument familiar from the Ukraine war, and Alexander III. (1845–1894), who gradually expanded the Russian Empire.

Putin and the idea of a democratic dictatorship

Reading Russian philosophers of the 1920s, above all Ivan Ilyin, had a significant influence on Putin. An anti-Bolshevik who greatly appreciated fascism but did not approve of its anti-religious orientation in Germany and Italy. Ilyin’s writings were banned in the Soviet Union. Putin came into contact with them in the 1990s.

“Anyone who loves Russia must wish her freedom, above all freedom for Russia itself, its international independence and autonomy.“

The theses say that Russia needs an authoritarian form of government, legitimised by religion and history. After the end of the Soviet Union, the West would try to dismember and hold down Russia under the pretence of “freedom” and “democracy”. Unless a leader succeeds in uniting the people, defeating the West and restoring pride to Russia.

Ilyin was a Christian fascist, saw the West as decadent, advocated a “democratic dictatorship”, i.e. democracy by acclamation: a ruler who is elected for a long time. Putin did that. Ilyin’s books are considered required reading among the Russian elite.

How the KGB clone Putin became a tyrant

Putin saw the approximately simultaneous pro-Western revolutions in Georgia and Ukraine as confirmation of Ilyin’s theory. In 2013, Putin believed he had found moral confirmation for his megalomania: Same-sex marriage is allowed in Austria. Drag queen Conchita Wurst wins the song contest in 2014. In response, Putin stirs up fears of an end to the traditional family in speeches. 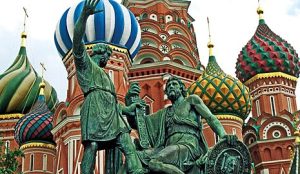 Megolomania solidifies into his ideology, he sees himself as a defender of Russian identity and culture against the West: patriotism, Christian values and the preservation of the traditional family. And thanks to the Putin doctrine, he believes he can intervene anywhere in the world he sees these Russian values at risk. His goal? The creation of a “russki mir”, a “Russian world”.