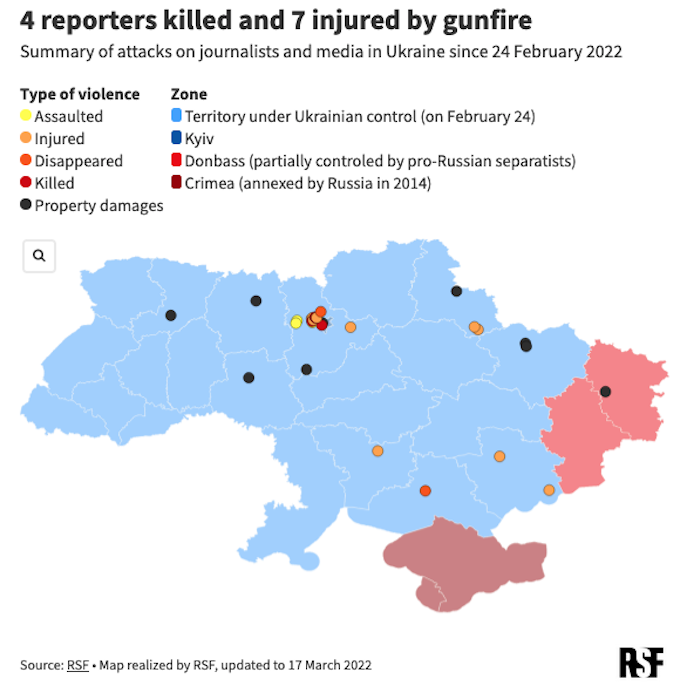 From the start of the Russian offensive in Ukraine on 24/02/22, Reporters Without Borders (RSF) has documented attacks directly targeting journalists wearing a “Press” armband.

Despite international conventions meant to protect them, increasing numbers of our colleagues have been killed or injured, as RSF’s interactive map of press freedom violations shows

Diary of upcoming events of interest to journalists

Wikileaks founder Julian Assange‘s next court hearing is likely to be in London on 20/04/22 The magistrate is expected to order his extradition to the USA: RSF’s coverage

On 27/04/22 the Brussels Press Club will mark the launch of the 2022 Annual Report of the 15 Platform partners, including the AEJ, EFJ, and IP. Details for online registration and participation are to be confirmed soon. Embargoed Report leads on a summary of headline news following the Russian invasion of Ukraine on 25/02/22 and calls for action based on both this and trends in 2021 Platform alerts. Note that the recently-elected Press Club President is Belgian AEJ Vice-President Alia Papageorgiou.

28/04/22, Brussels: Event planned by Coalition Against SLAPPS in Europe (CASE) to respond to the European Commission’s unveiling (expected 27/04/22) of its proposals for SLAPPS Directive and Recommendation.  Details available soon. AEJ is now a member organisation of CASE.

03/05/22  World Press Freedom Day 2022 will be hosted on May 2 – 5 by Uruguay. Theme is: Journalism under digital siege. Registration for online participation is open. Over 50 sessions organized by 100+ partners will discuss current burning issues on the latest digital technology impact on freedom of expression, media freedom, the safety of journalists, access to information, and privacy.

17/03/22 Countering Disinformation: The CoE Committee of Ministers adopted Recommendation CM/Rec (2022)4, which had been held up for months by Russian objections. But the Russian Federation was expelled from CoE membership in March and this “soft law” instrument aimed at countering threats from disinformation, political interference etc is now agreed upon among the other 46 Member States. 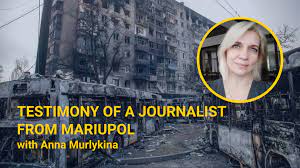 31/03/22 Journalist’s searing video evidence from Mariupol. Testimony and Q and A with independent Donbass journalist and editor Anna Murlykina at CoE-organised event in Kyiv: AEJ members who have not yet seen this are recommended to watch it.  WH: “unforgettable and relevant to the demand for Russian leaders to face trial for war crimes.”