The Lithuanians have officially renamed the road in Vilnius where the Russian Embassy is housed “Ukrainian War Heroes Street” instead of boring old Latviu Street. There’s no other way to send airmail there than using that address, which will likely rankle as intended. 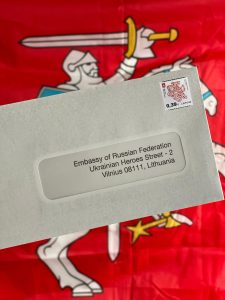 Germany’s renewed commitment has been warmly welcomed by the rest of NATO, not to mention the perilously positioned Baltic states, formerly part of the Soviet Union. In the event of Ukraine falling and Russian forces remaining in Belarus, NATO’s eastern flank would be highly vulnerable.

There is a narrow strip of land called the Suwalki Gap, the only land route between Lithuania, Estonia and Latvia and the rest of Europe, and its NATO support. To the west of the gap lies Kaliningrad, a Russian exclave on the Baltic coast; to the east lies Belarus. Were Russia to occupy the Suwalki Gap, the land between the two territories, defending the Baltic states would become almost impossible.

As Russian exercises on the Eastern border of the Baltic states increased in frequency, size and aggressiveness, NATO started to deploy multinational “tripwire” forces in the three countries and Poland from 2016. This was to ensure that a Russian attack would be an attack on NATO as a whole (on the principle of the three musketeers: tous pour un, un pour tous).

Those units have now been strengthened, and, it is agreed, must be strengthened further. That said, Russia’s initially slow progress in Ukraine is also raising NATO eyebrows at Russia’s true capabilities.

But none of this takes into account the very real and dark possibility that Putin will ignore the Security Council understanding that nuclear weapons are for defence purposes only. This is the first time that a permanent member of the council has been “a crazy old rogue with a massive nuclear arsenal,” as one member of the Council on Foreign Relations expressed it.

But a geopolitical statement such as changing the Russian Embassy’s address in Vilnius will not go un-noticed in the Kremlin.