Putin has used British rich man’s law to avoid scrutiny, at a crippling cost to us all This column appeared in Sunday’s Observer.

Truth is meant to be the first casualty of war, but in Britain the ability to tell the truth about Russia was gunned down before Putin ordered his armies to advance.

You need to write about Russian power to understand fully the anger and shame plutocratic censorship brings. Anger because Britain is our country, and claims to be a free country, and yet foreign oligarchs can manipulate the truth here as surely as Putin can in Russia. Shame because we cannot perform the first duty of journalists and speak in plain English without our newspapers accepting the risk of staggering legal costs.

In the safe space of the House of Commons, Labour MP Chris Bryant quoted from leaked government documents, which stated Roman Abramovich should be watched because of “his links to the Russian state and his public association with corrupt activity and practices”. God help anyone who says as much outside when the government has not put him on its sanctions list.

Bear the costs of challenging wealth in mind when you wonder how London became a centre of corruption. Anglo-Saxon law brings class justice rather than real justice. The verdicts of individual judges are not to blame – whatever their faults, they do not take bribes. But the price of reaching a verdict is so high that few dare run the risk of being left with the bill. A system can be rigged even if the people in charge of it are honest, and there is institutional prejudice in the English justice system in favour of wealth that is as pervasive as institutional racism in the police.

Let one example stand for thousands. The Parisian intellectual Nicolas Tenzer tweeted that the French equivalents of George Galloway and Nigel Farage acted as the Kremlin’s “useful idiots” when they appeared on Putin’s propaganda channel RT. RT sued, claiming that not only had Tenzer libelled the station but that he was guilty of an “encroachment on the dignity” of its journalists – as if security guards did not strip its hacks of dignity every time they went to work. Naturally, the French courts found against RT. Astonishingly to anyone involved in the struggles for free speech in the UK, the cost of the case was just €10,000 (£8,400).

Compare that with the price of writing about the Putin regime in the UK. In January 2021, after Putin’s agents had poisoned him but before he was jailed, the Russian opposition leader Alexei Navalny praised Catherine Belton’s Putin’s People. It is indeed the book of the moment, which shows how KGB men created the world’s most dangerous rogue state. Abramovich, three other Russian billionaires and Putin’s energy company Rosneft sued. 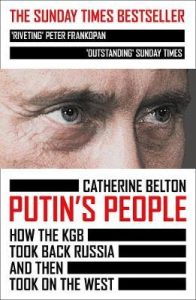 The case was trivial. Belton’s publishers HarperCollins settled it agreeing to make changes to the text most readers wouldn’t notice. Yet although it never went to a full hearing, the case, it was revealed to me, cost HarperCollins £1.5m – 178 times the price of the libel trial in France. In effect, HarperCollins was fined a small fortune for publishing an anti-Putin book by the English legal system.

If we were capable of feeling shame at the misery Britain’s corruption inflicts, we would radically reform the law

You may not care about journalists when it is the police’s job to arrest the corrupt. “Our” rich man’s law ensures, however, that the police have pretty much given up. The government introduced unexplained wealth orders in 2018 as a “full-spectrum” assault on illicit wealth being laundered through the property market. It did not realise that the fantastically wealthy could hire London’s best lawyers, who are more than a match for the barristers the state can afford.

When the National Crime Agency lost a case against the family of Rakhat Aliyev, a former deputy chief of the Kazakh state security service, it had to pay £1.5m in legal costs, which seems to be becoming a standard charge in the high court. Its annual budget for tracking down money launderers was all but wiped out.

If we were capable of feeling shame at the misery that Britain’s corruption inflicts on the world, we would radically reform the law. We would move closer to a continental legal system. We would make judging a career in its own right and phase out the recruitment of judges from the ranks of barristers and solicitors, who appear to think obscene costs are reasonable. We would stop selling English law as a luxury service in the global marketplace and say its first duty should be to meet the needs of the people of this country. And we would impose limits on the fees the lawyers of the super rich can charge in the high court.

As it is, I suspect nothing will happen. Aside from Private Eye and a handful of patriotic MPs, no one highlights how a section of legal London profits from Russian billionaires. The lawyers who went for Catherine Belton included Hugh Tomlinson, who is on the board of Hugh Grant’s Hacked Off, which says it wants to hold “power to account”, not act as its servant, and Geraldine Proudler, who until recently was on the board of the Scott Trust, which regulates us here at the Guardian and Observer and ensures we maintain the highest ethical standards.

Get off your high horse, lawyers tell me when I raise an eyebrow. Everyone would do the same if they had the chance.

And if not everyone, then many would and do. It’s not only lawyers who simper pieties about respecting human rights while slipping wads of oligarchical cash into their pockets. Politicians, footballers, estate agents, private school head teachers, hedge fund managers, bankers, art gallery owners and whole sections of the professional class are hooked on dirty money.

The Treasury opposes every anti-corruption measure because, I suspect, it sees their dependence clearly. It regards the British economy with deep pessimism. It notes the poor quality of our managers and entrepreneurs, and the self-inflicted wound of Brexit, and concludes that dirty money is better than no money.

As Russian tanks roll across Europe, a true cause for anger and shame is that at no point have we had a public debate about whether we want a future where we are living off immoral earnings and are so frightened of immoral lawyers we no longer dare describe what this country has become.