Editor wins prestigious prize. Will it save his paper? 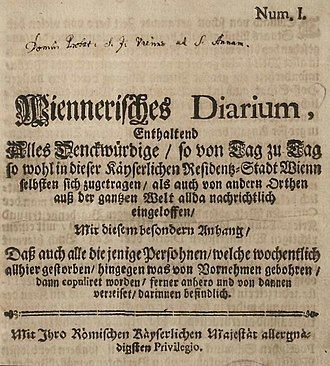 Walter Hämmerle, editor of the Wiener Zeitung, the world’s oldest surviving daily, was one of the winners of major journalism prizes presented yesterday by Austrian President van der Bellen.

The honour is significant in light of the – until now – imminent closure of the state-owned but notably independent paper.

This year’s winners apart from Hämmerle were Alexandra Wachter (Puls 4 tv) and Elke Ziegler (ORF Austrian radio/tv), all including the president making eloquent, pointed speeches during the award ceremony. Their main point (tv film in DE) was the need to protect and support serious journalism and to put a stop to state money being corruptly used to manipulate opinion polls and political coverage – if Austrian democracy was to survive.

Von der Bellen was if anything as forthright on these issues as Hämmerle, the other prizewinners, and luminaries in Austrian journalism.

Prizes galore: WachterThe atmosphere in the Hofburg (presidential palace) was all the more electric because of the political context – the recent shock resignation of ex-Wunderwuzzi Chancellor Sebastian Kurz, 35, and the gathering scandal over corrupt and manipulative suborning of Vienna’s boulevard press before and during his time at the top.

Has the Kurz scandal inadvertently given real hope that the Wiener Zeitung may, after all, survive another century or so?