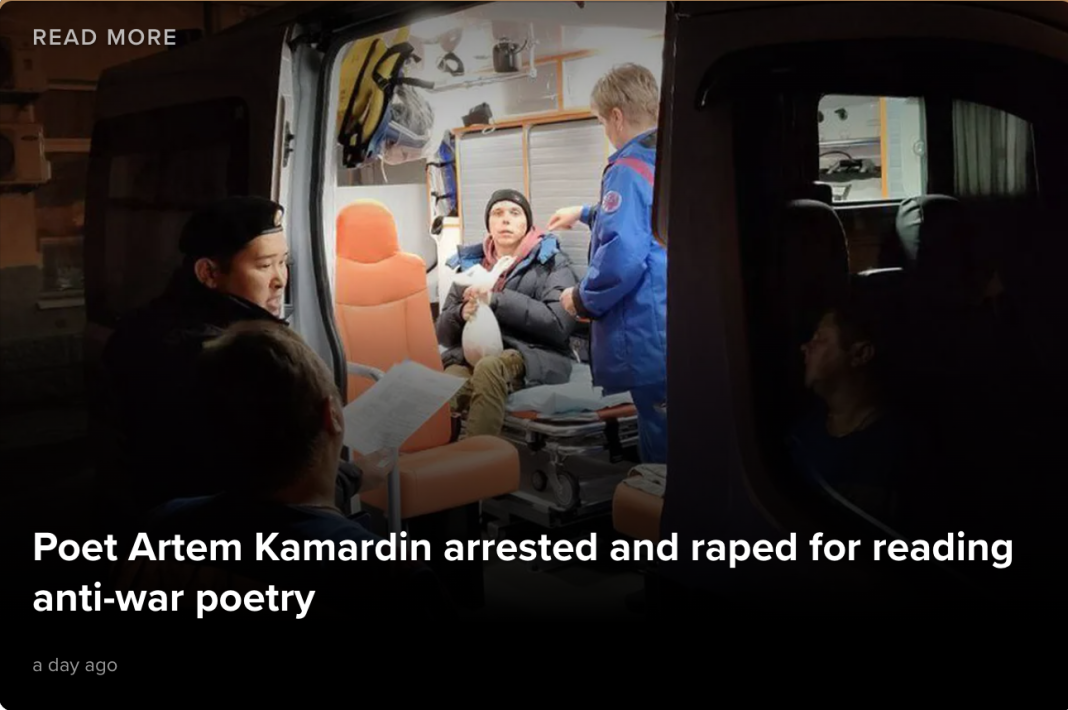 On September 26, Russian police showed up at the home of 31-year-old Moscow poet Artem Kamardin, as we reported yesterday. After ransacking the apartment, officers proceeded to beat Kamardin, his girlfriend, Alexandra Popova, and their roommate, Alexander Menyukov. According to Kamardin’s lawyer, police also raped the poet with a dumbbell — not at the police station, but in his own home. Kamardin is currently still in police custody, and a criminal case has been opened against him for reciting anti-war poetry at an anti-mobilization event on Sunday. Meduza, an independent Russian news outlet spoke to Kamardin’s roommate, Alexander Menyukov, who has now been released and is considered a witness in Kamardin’s case. 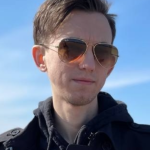 We expected them to come search our place, but we didn’t expect this. It wasn’t a search, it was a pogrom. A hellish combination of something from Chechnya and something from Belarus.

[Before the search,] they spent the entire time posted up outside of our apartment building. An hour before the search, an unmarked Ford Transit pulled up to the building. It was too late to hide — they just would have arrested us outside and dragged us back into the apartment. So [instead,] we used the remaining time to steel ourselves [for whatever was coming]. Still, we weren’t prepared for how [the arrest and search] happened.

They [the police officers] initially got mixed up and broke into an apartment a few floors above us. They made everyone get on the ground, and it turned out to be just a regular family — a mom and a daughter. When they realized they had the wrong people, they came down to us and started ringing the bell and banging on the door. We sat there listening to it for about 20 minutes.

[Then] they started trying to break down the door, but they had a hard time. We called a lawyer and told him what was happening. He told us to open the door because otherwise they would write that we had “resisted arrest.” We opened the door, then the three of us went to different rooms.

A whole horde of them came in with machine guns. They didn’t show us a search warrant; special forces just burst into our apartment. There wasn’t even an investigator. Just several agents who were in charge and a special forces unit.

It was Alexandra [Popova] who opened the door. They put her in the nearest room [to the apartment door], and we were in the two furthest. I didn’t see or hear anything that happened to Alexandra. But I did hear what happened to Artem. It was impossible not to hear. A lot of media outlets wrote that Artem was raped in the police department. That’s not true — it happened in our apartment.

I lay down on the floor — they shouted at me to through the door. They came into my room and hit me a few times. They asked the agent, “This guy?” And he was like, “Yeah, yeah, yeah. That one.”

They mostly beat me on the back. My ear is a bit broken, and there are bruises on my wrists and bruises on my back. After they’d beaten me up a little bit, [one of them] pressed down on my back with their foot. I don’t know how long I spent like that. Then they pushed me into the hallway, and the agent said, “Oh, not that one.” And they hit me a few more times.

[Meanwhile,] they were destroying my room. They dug into my personal things, knocked down the shelves, and turned everything upside down. Then they started hitting me with a baton to try to make me tell them the password to my laptop. But the laptop belongs to my ex-girlfriend — I was just storing it for her. I didn’t even know the password.

[They also] poured gasoline from a Zippo lighter. They beat me to try to get me to tell them where the lease [for the apartment] was, but I didn’t know.

After that, they took Artem and Alexandra to the Investigative Committee, then me. Artem is being charged under Article 282 of the Russian Criminal Code: “Inciting hatred with the threat of violence.” He’s detained for 48 hours.

The agents realized back in the apartment that I didn’t have anything to do with all this, so they didn’t make me apologize in front of the camera [like they did with Artem]. I didn’t read in the [anti-war poetry] reading that day [September 25]. A young detective, fairly green, asked me a bunch of questions about Artem: what kind of poetry he writes, who he talks to, what his political views are. “I don’t know,” “I don’t remember,” and “I plead the 51st [article of the Russian Constitution]” were my three basic answers.