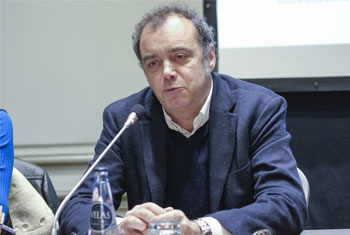 The AEJ Media Freedom Representative and UK Chairman participated in the AEJ Press Seminar “The War in Ukraine: What does it mean for Europe?” at the European Parliament on June 16, 2022.

The European Union claims it has understood that the demise of free and independent media spells the death of democracy. Europe, it’s said, has “learned the lessons” from being duped for years by Putin’s victim-blaming propaganda.

For Europe’s major institutions, journalists’ physical and legal safety is now a policy priority. An EU Media Freedom Act is in the pipeline. But is it already too late?

The AEJ’s Press Seminar in Brussels heard the bell toll for the near-death of journalism, under attack from ruthless political and business forces, and rotting on the inside from the decay of public trust.

But the gathering of journalists and MEPs heard another story, too. Of legal victories against corrupt oligarchs, of revolutionary technologies exposing the lies of dictators, and of a surge of support for investigative journalism as a vital safeguard for open societies.

The hard reality is that in the battle between coercive autocracy and accountable democratic government, the autocrats are having their best years since the fall of communism in Europe.

A pattern of manipulative state controls over media and the flow of information has hastened that dismal state of affairs. Russia’s expulsion from the Council of Europe on March 16, three weeks after its all-out invasion of Ukraine, was the clearest sign that the techniques of stigmatisation and dehumanisation perfected by Joseph Goebbels in the 1930s can still stoke genocidal behaviour and aggressive war in Europe in the 21st century.

Bulgarian MEP Radan Kadev voiced acute concern that years of sustained Russian propaganda and political subversion had concealed the truth that  Russia was an aggressive colonial empire. His country was especially vulnerable for historical reasons and was now the “weakest part of the dam” among EU member states. He went on to predict exactly what has since occurred in Sofia – the collapse of Bulgaria’s reform-minded government and Bulgaria’s entry into fresh elections and turmoil which Moscow would do its best to exploit.

Xavier Mas de Xaxas, a journalist for the Spanish newspaper La Vanguardia who recently returned from reporting on the war in Ukraine, underlined the political effectiveness of Russia’s barrage of political propaganda. Although Ukraine was winning the battle of ideas, he said, EU states like France and Germany would press Ukraine to accept an early peace deal as European public loses the will to support Ukraine in the second half of this year.

In other words, it was a victory for Putin that leaders in those countries were still being guided by the idea that Russia must not be “humiliated”.

Green MEP Daniel Freund pointed to a pervasive loss of public trust in quality media across Europe as a key danger to democratic debate and fair elections. Online platforms were still able to make large profits from trolls and the mass distribution of fake news. The EU’s Digital Services Act was meant to curb such abuse but at best, he said, it would be “a long struggle”.

As a Europe-wide association of journalists, the AEJ is heavily invested in cooperative efforts to reverse the backsliding among European governments. To perform their “watchdog” role in the public interest, independent media must remain viable in a digital world dominated by the giant tech companies and also have the legal protections they need to hold the powerful to account.

The CoE’s recent Defending Press Freedom in Times of Tension and Conflict  https://fom.coe.int/en/rapports  report by 15 representative media and free expression organisations, including the European Federation of Journalists, the International Press Institute, the Association of European Journalists and leading NGOs, presents a mass of verified data showing that press freedom is under siege in Europe from political interference and existential problems of economic survival.

One big conclusion from the 282 media freedom alerts which the concerned organisations reported on the Council of Europe’s Platform for the safety of journalists last year is that media capture and self-censorship are spreading dangerously from the former Soviet space into the rest of Europe. The platform’s records show how 150 specific cases of attacks or threats against free media in Russia preceded its invasion of Ukraine. The lesson is that the war which began in February was carefully prepared for by the gradual strangulation of independent media voices inside Russia through intimidation and the criminalisation of journalists’ work.

The loud and clear message from the report is of determination to assert journalists’ right to report without arbitrary controls and the threats of reprisals that have become commonplace, whether in the form of physical attacks or misuses of the law to stifle public debate. The monitoring work of the Platform is designed to act as an early warning and rapid response system so that serious violations of Article 10 (freedom of expression) rights under the European Convention on Human Rights can be remedied without waiting years for cases to be heard at the Strasbourg court.

The Platform partner organisations proclaim the urgent need for the (now 46) member states of the Council of Europe to enforce the safeguards for journalists’ right to report which they have signed up to. If they fail to act quickly to head off authoritarian trends, other states may follow Russia’s example by abandoning any pretence of upholding democratic standards and free speech. Russia was expelled after being found in “flagrant violation” of its obligations as signatories of the European Convention on Human Rights and members of the Council of Europe.

EU is late for the showdown

The European Union has come late to the realisation that it must act decisively to enforce the protections for press freedom and public service media which it counts as a key part of the Union’s fundamental values. Organisations advocating for the rights of free media in Europe are now demanding that the Commission’s annual Rule of Law audit of the 27 EU member states must publicly call out political interference in media regulation and misuses of the law aimed at stifling critical voices.

Journalists’ future in their own hands

The journalists’ gathering at the European Parliament also took positive messages from examples in the recent past.

In Ukraine, the Stopfake website, quickly became an iconic example of effective de-bunking of propaganda and lies in the Russia media after it was set up in response to the annexation of Crimea and the Russian-backed rebellion in eastern Ukraine in 2014.

More recently, what was seen at the time as the political capture of the independent Kyiv Post newspaper resulted in the whole editorial team establishing a new and successful new media outlet, the Kyiv Independent. Much of the Ukrainian media’s reporting on the war has been seen as courageous and exemplary, despite the heavy toll of journalists’ deaths.

Peter Jukes, the founder of Byline Times  hailed an important victory for investigative journalists against the tide of intimidation and legal harassment against journalists in the UK by Russian oligarchs and other powerful figures. This month the multi-millionaire pro-Brexit campaigner Arron Banks lost his libel action against the Observer and Guardian journalist Carole Cadwalladr in what was seen as a significant victory for public interest journalism.  If she had lost, the journalist could have faced costs and damages of a million pounds or more.

Byline Times started up in Britain four years ago in the UK by relying not on advertising but on a mix of crowd-funding and subscriptions. Today it is one of a number of innovative media newcomers there that have challenged the established “big beasts” of the media by breaking big stories about the rich and powerful. Jukes condemned the oceans of “dark money”, much of it from Russia and Azerbaijan, known to have been circulating in “Londongrad”, and the astronomically high cost for journalists of defending themselves against libel suits in the London courts.

He pointed to what he called the merger of the media and political class in the UK and elsewhere in Europe, as the source of widespread abuses of power and cover-ups of systemic corruption. When political and media power merge, independent journalists are always the enemy.