Britain’s stance on Ukraine wins plaudits, but questions remain about the UK’s wider record on Russia and whether its tone will really help achieve longer-term goals for Ukraine.

by John Kampfner
Executive Director, UK in the World Programme

‘The UK stands with Ukraine’ blares the message on the home page. ‘Find out how you can help,’ it adds. This is not a charity appeal but the UK government’s microsite proclaiming its assistance in repelling the Russian invasion.

UK prime minister Boris Johnson positioned himself as ‘leading the way’ in helping Ukraine, and was the first world leader to state Vladimir Putin ‘must fail’. In her recent Mansion House speech, UK foreign secretary Liz Truss raised the bar further by saying the UK will ‘keep going further and faster to push Russia out of the whole of Ukraine’.

Context is the key to understanding why the UK’s approach has been so bullish, namely that Johnson and his ministers seek every opportunity to demonstrate how Brexit enables the UK to act more nimbly. As Truss has stated, the UK is prepared to ‘do things differently, to think differently and to work differently … to get things done’.

In response, Ukraine president Volodymyr Zelenskyy invoked Winston Churchill – and thereby pressed all the right buttons – when praising Johnson in his recent video address to the UK parliament. And the welcome he gave the UK prime minister during his supposedly ‘secret’ train visit to Kyiv was also most effusive.

The Ukrainian president repeatedly juxtaposes the UK’s position with that of others, as he did at his recent Chatham House event by restating his criticism of Germany for its dependency on Russian energy and hesitancy to provide heavy weaponry.

Context is the key to understanding why the UK’s approach has been so bullish, namely that Johnson and his ministers seek every opportunity to demonstrate how Brexit enables the UK to act more nimbly

When armoury from the UK – including light anti-tank weapons and surface-to-air missiles as well as other munitions and equipment – started arriving during 2021, Ukrainians saw the UK as ‘bold’, says Orysia Lutsevych, 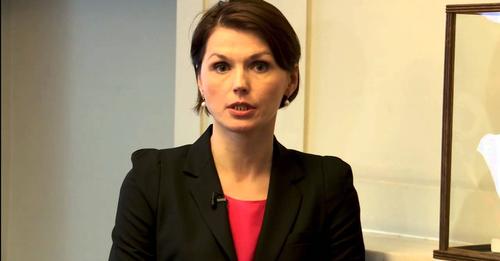 head of the Ukraine Forum at Chatham House (left).

In his address to the Ukrainian parliament, Johnson pledged more armoured vehicles, drones, and longer-range anti-naval missiles. And prior to that, under Operation Orbital, British soldiers were already training Ukrainians, while since 2018 British vessels have regularly patrolled the Black Sea. On one notable occasion, a Russian ship even fired warning shots.

Ukraine is also grateful for British intelligence which, together with the Americans, publicly predicted the invasion at a time when other countries’ services were drawing different conclusions, due either to wishful thinking or a scepticism arising from Iraq. The UK Ministry of Defence’s frequent Twitter updates on the war are now widely read.

But although Britain’s recent approach can rightly be seen as foresighted, it is also clever in playing to a narrative of being the ‘plucky risk-taker’. This allows the UK to circumnavigate France and Germany, deepen its relationship with the US, and develop stronger ties with others such as Poland, the Nordics, and the Baltics. And it contributes to the UK’s credentials as a gutsy ally of those in the Indo-Pacific seeking to counter China’s growing threat.

Domestically, this has also been a political godsend for Johnson by allowing him to counter media and public outrage about law-breaking Downing Street parties during the pandemic with an appeal not to rock the boat during such a major crisis. And the invasion also plays to his performative style of politics – as Lutsevych says, Johnson and Zelenskyy connect because both are ‘eccentric characters’.

But it should not be forgotten that the contradictions of the past decade are glaring, and that the role of London as the centre of global money- and reputation-laundering – particularly helping Russians who are close to Vladimir Putin – should be a source of shame.

Chatham House’s recent kleptocracy report highlights the extent to which UK politicians – especially the ruling Conservatives – have benefited from Russian money, and how strenuous efforts were made to delay then play down two critical parliamentary reports on ‘Londongrad’. And despite several high-profile poisonings on British soil and repeated cyberattacks, not a single figure close to Putin was sanctioned by the UK until after the Ukraine invasion.

When Russia invaded Donbas and annexed Ukraine in 2014, the UK was happy to fall in behind efforts by France and Germany to negotiate a settlement with Moscow and Kyiv under the Normandy Format, which ultimately failed. But despite assertions that Ukraine’s integrity should have been the UK’s clear position immediately after 2014, the policy implications of confronting Russia back then were ‘too uncomfortable’, according to one former FCDO Eastern Europe specialist.

Britain acted no differently to its then-EU partners as the UK, along with the US, France – and Russia – bore responsibility as signatories to the 1994 Budapest memorandum, which provided soft security assurances to Ukraine in return for it giving up its Soviet-era nuclear arsenal. But, according to recent media reports, Ukrainian pleas went unheeded. The UK’s record on welcoming Ukrainian refugees has also been lamentable and falls far short of others.

But none of this is mentioned by Zelenskyy because, according to Lutsevych, he would be ‘crazy to raise the past’ when Britain’s assistance, and its forthright language denouncing Putin is not just welcome but can be used to galvanise others to do more.

However, the next phase, whenever that comes and however that looks, may require different, more collaborative, skills. Simon Smith, a former British ambassador to Ukraine, says the UK’s aims should be defined in terms of defending and strengthening Ukraine rather than attacking Russia.

Although it may be attractive now to be seen to be ‘having a go’ at the French and Germans, in the longer term this is a bad strategy, both for the UK and Ukraine – the latter remains keen to join the European Union (EU) and when it comes to delivering a peace and rebuilding their country, Ukrainians know where the true power lies.

This article first appeared on the Chatham House website