Moldova Diary: the Russians are coming

by Paula Erizanu (from the Financial Times Weekend section)

‘No one in Chisinau believed a real war might re-emerge here. That has changed’

I am having breakfast in my parents’ garden in a suburb of Chisinau, the capital of Moldova. It’s a sunny day, the birds are singing, tulips and violets are in bloom. My two mixed-breed dogs, Pfizer and AstraZeneca, adopted during the pandemic, climb on my knees, asking to be stroked. A truck selling vegetables passes by with a nasal voice announcing on a megaphone: “La cartoafe, ceapa, morcovi, mere” (“Potatoes, onions, carrots, apples” in Romanian). This couldn’t get any better and yet, once again, I am crying, afraid that I may lose all of this.

Just this week there were several explosions in Transnistria, a breakaway region whose border is an hour’s drive from Chisinau. This 400km-long strip of land is separated from the rest of the country by the Nistru (Dniester) river and controlled by a Kremlin-backed regime that has not been recognised by any country, not even Russia. The strikes destroyed the so-called ministry of security building in the city of Tiraspol on Monday, and on Tuesday hit two radio antennas in the town of Maiac that broadcast Russian programmes. No one was hurt or killed.

Such incidents have happened before in Transnistria, but the war in Ukraine makes them all the more worrying. The Friday before last, Russian general Rustam Minnekayev announced a plan to create a corridor from eastern Ukraine, via the south, all the way to Transnistria. He added he was aware of “oppression of the Russian-speaking population” in Transnistria — an ominous echo of the pretext used to justify the invasion of Ukraine.

Some friends are asking on Facebook whether they should pack their bags. I know Moldovans who have already fled since Russia’s invasion of Ukraine. I’ve planned a birthday trip next week to the Romanian mountains and now wonder whether I will be able to get back and see my grandparents and my dogs again. “Let’s hope this is not our last Easter together,” my grandmother said as she raised a glass over our family lunch last weekend.

When my mother gave birth to me 30 years ago, she could hear the bombs from the Transnistrian war from the maternity hospital in Chisinau. The conflict, lasting between March and July 1992, was Russia’s first post-Soviet war aiming to keep a former colony under its sphere of influence. To this day, Russian troops are stationed in Transnistria and some 20,000 tonnes of Soviet ammunition are buried in the village of Cobasna, the largest ammunition depot in eastern Europe — despite international agreements signed by Russia to withdraw both. 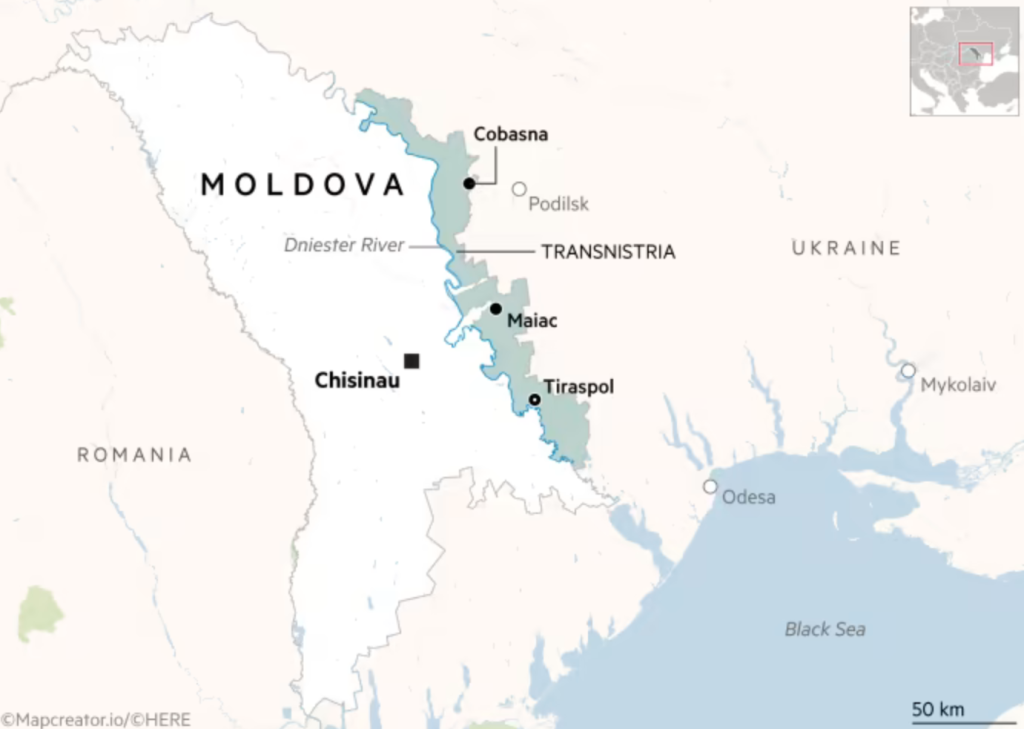 Throughout my life, the frozen conflict in Transnistria has been a continuous setback for Moldova’s independence from Russia, its aspirations to join the EU and its fight against corruption. But no one believed that a real war might re-emerge on Moldova’s territory. That has now changed.

The mantra we keep repeating is: “Moldova depends on Odesa, and Odesa depends on Mykolaiv.” Odesa is only 60km away from the Moldovan border, and Mykolaiv is 130km from Odesa; neither has yet been taken by the Russians.

Since the outbreak of the war in Ukraine, government sources have told me that Transnistrian requests for Moldovan passports have drastically increased. Following the news of the explosions in Tiraspol, I saw images on social media showing hundreds of cars waiting to exit Transnistria — although an acquaintance who visited his family there for Easter said some people in the queue might just be returning from their holidays.

Before these new incidents, I met up with photographer Mikhail Kalarashan. Born in Tiraspol, he is currently based in Chisinau but often goes back to Transnistria. “There is a real chance to solve the Transnistrian conflict now,” he told me. “It’s just that no one has actually tried to do it over these past 30 years.”

Since the 1990s, Transnistria’s economy has been monopolised by one company, Sheriff, which was co-founded by ex-KGB agent Victor Gushan and which owns everything from a supermarket chain to the eponymous Champions League football club and effectively runs Transnistria’s ruling party. There aren’t many opportunities for people outside this small elite. With the death of Transnistria’s Soviet-era industry, Moldova has become more attractive for young people like Kalarashan. It will be even more appealing if its EU membership application makes significant progress.

Since the war, my family has stopped watching local TV programmes, tuning in instead to Freedom Ukraine, a Russian-language channel on which several Ukrainian television teams have joined forces to cover the war. One commentator explained the incidents in Transnistria as the Kremlin’s attempt to formally take over the region in order to have “at least something” to report on May 9, known in Russia as Victory Day.

It’s a plausible explanation. May 9 parades glorify the Soviet conquest over fascism in the second world war and commemorate the victims, but in recent years they have been used as pro-Kremlin marches. In Transnistria, the May 9 parade has now been cancelled. We are yet to see what will happen in Chisinau, where the date has often been marked by marches organised by pro-Russia political parties.

One key symbol in these parades is the orange-and-black St George ribbon, a Russian military symbol that was banned in Moldova last week, together with the “Z” and “V” markers adopted by Russian troops in Ukraine. “Those justifying the killing of Ukrainians today might ask for the killing of Moldovans tomorrow,” president Maia Sandu said as she promulgated the law. In response to the ban, Duma member Viktor Vodolatsky declared that “the Ukrainian script will be repeated [in Moldova]”.

In the first week of war, Chisinau’s decaying socialist modernist National Hotel was painted yellow and blue, the colours of the Ukrainian flag. As the new law came into force, it was half painted over in orange and black, the colours of the St George ribbon. The police identified two individuals paid by the Kremlin-supported opposition party PSRM as the painters. The authorities asked the same individuals to cover the orange with black paint.

It gives me hope that the blue-and-yellow flag was a spontaneous act, while the St George ribbon was driven by money — and ruled out by law. Law and international support can protect Moldova from Russia’s meddling in its politics. But given our small military, only the Ukrainian army is now protecting us from Russian aggression. I will keep donating to them.

Paula Erizanu is a freelance journalist and author

Share
Facebook
Twitter
Pinterest
WhatsApp
Email
Print
Previous articleSuicide bomber kills 50 in suspected ISIS attack on Afghanistan mosque as the country descends further into chaos
Next articleCoE Secretary General: Media should be able to report free from attacks and intimidation, including in times of war
- Advertisement -