Journalists being singled out for torture 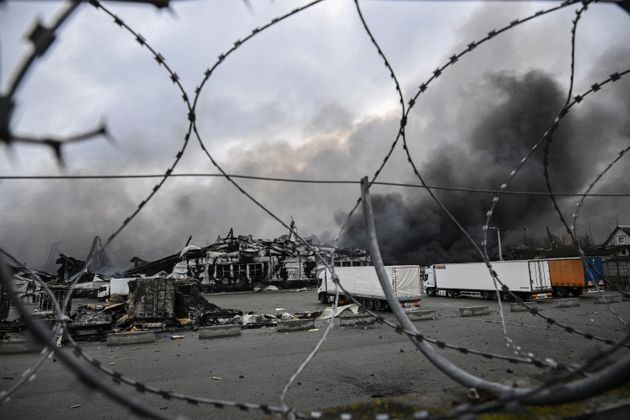 DSG
Russia’s war crimes will now include torture of journalists – files being prepared
Kidnapped by Russian troops on 5 March, Nikita (his name is changed for his safety) was held for nine days. He was beaten with an iron bar, tortured with electrodes, and subjected to a mock execution. Reporters Without Borders (RSF) has collected and verified his story.

A week after the facts, RSF reveals the shocking account of a 32 years old Ukrainian fixer and interpreter, who was taken prisoner by Russian soldiers on March 5 in central Ukraine. Held captive for 9 days, left in an icy cellar, he was repeatedly tortured. This man was detained alone before being joined by three other prisoners, including a former senior Ukrainian civil servant.

Safe (for the time being) in a Ukrainian town, Nikita told RSF about his nine days of horror. Although trained as a lawyer and manager, Nikita has worked intermittently as a fixer and interpreter for foreign media since 2013. The media outlets he has worked for include France 2, BFMTV and RFI. Last month, the IT company that employs him began having problems because of the war, so he started working full time as a fixer, this time with Radio France. Among the foreign reporters who have employed him, those contacted by RSF are unanimous: he is very professional, serious and competent. And like any Ukrainian, he has been very worried about his family as the indiscriminate Russian bombardments have grown in intensity.

RSF began looking for Nikita after being told by Radio France on 8 March that he was missing and, after his release, finally established contact with him via the Press Freedom Centre that has been opened in Lviv. His account was taken down by senior staff of RSF’s Advocacy and Assistance Department during several sessions on 17 and 18 March. The various parts of his account were corroborated by interviews with a member of his family, with one of his former fellow prisoners, and with two Radio France journalists. An RSF staff accompanied him during his medical examination, which confirmed the physical mistreatment to which he was subjected, in particular, the bruising and other injuries to his legs where electric shocks were inflicted. RSF was also present during his calls to his family.

RSF plans to pass his account to the International Criminal Court’s chief prosecutor, as a follow-up to the two complaints that it has already filed with the prosecutor on 4 and 16 March.

“Nikita has given us a chilling testimony that confirms the intensity of the war crimes perpetrated by the Russian army against journalists,” RSF secretary-general Christophe Deloire said. “Passing his testimony on to the ICC prosecutor is the least we can do for this courageous young fixer.”

Although traumatised by the ordeal he has gone through, Nikita is determined to continue working as a fixer in order to help realise the right to news and information. It is his way of contributing to his country’s freedom because he says he is no good at wielding a gun. One of his fellow detainees is hospitalised with seriously injuries. The fate of the former senior civil servant is unknown. The other prisoner, the one RSF was able to contact, said he got away without too many injuries or other consequences. When RSF asked him why he thought they were released rather than executed, he replied: “I don’t think they had the courage to dig graves.”

Oleg Baturin, a Ukrainian journalist who was released on 20 March after being held for eight days by the Russian army and being treated in a similar manner, said: “They wanted to break me, walk all over me, to show what will happen to every journalist, that you will be killed.”

On 5 March, Nikita accompanied a visiting Radio France crew on a reporting trip in the centre of the country, not far from the village where his family had sought refuge. At the hotel where they stayed, he learned that the road to his family’s village was open. As the bombardments were intense in the region, he decided to make a quick trip to see if his family was still there and to evacuate them. He borrowed the crew’s car after removing all the equipment. He had to cross three villages to reach his destination.

Nikita was ambushed by a Russian reconnaissance unit on the edge of a roadside forest while driving with a “Press” sign displayed on the front of the car. He recounts between 30 and 40 shots being fired to his car by automatic weapons. Lying on his side, he accelerated with the aim of getting away but hit a tree. Saved by his airbag, he shouted that he was a civilian, showed his hands to prove that he was unarmed and got out of the car. The soldiers – he counted six of them, each with a white band fixed around a leg – seized him, threw him to the ground, searched him and beat him. He kept shouting that he was a civilian but they seemed to think he was a soldier acting as a scout to guide artillery fire.

After pulling his cap over his eyes, the soldiers took Nikita to a house a few minutes’ walk away. Searching his phone, they found information related to his work as a fixer – about looking for bulletproof vests and plotting routes – that made them suspicious. They pulled him from the house, slammed him up against an outside wall, pulled up his cap, brushed his eye with a knife blade, ran it down his cheek, and threatened to cut his face. He explained that he was a fixer and interpreter for foreign journalists, but they hit him repeatedly with automatic rifle butts, on the face and body. Nikita felt pieces of teeth in his mouth and coughed up blood. The soldiers threw him into a ditch, next to a dead dog, and subjected him to a mock execution :  a soldier pretended that he wanted to check that his gun worked and fired a shot that grazed Nikita’s head.

The soldiers then took him to their camp in the forest about ten minutes’ walk away. With his cap pulled over his eyes again, Nikita could not see but from what he heard the camp seemed to consist of more than 100 soldiers, armoured vehicles and artillery. They tied him to a tree, stole his wedding ring, and removed his shoes. That afternoon, the soldiers beat Nikita again with rifle butts and steel bars on his legs. He lost consciousness several times. He said the soldiers seemed to be doing this for amusement.

Blindfolded, half-stunned, Nikita was moved and tied to another tree, and later to yet another one. He spent nearly three days in the forest, tied with his hands behind his back to trees. On 6 March, he was interrogated by a soldier he understands to be a Colonel. Nikita was asked about his activities. He spent another two days tied up in the forest. They stopped beating him, and other civilians were tied next to him. One of them, who was later released at the same time as Nikita, was contacted by RSF and helped to corroborate his account.

Nikita, this other prisoner and a third one were taken in an armoured car on 8 March to a place about 40 minutes away. On arrival, soldiers pulled him out of the vehicle, threw him to the ground,  a soldier sat on his back and he was asked the same questions as in the forest. The soldiers thought he was a spy who was using his job as a fixer as a cover.

A soldier rolled Nikita’s right trouser up to the knee and another gave him electric shocks. With his face pressed to the ground, Nikita was unable to see what instrument was used to administer the electric shocks, but he counted three or four shocks, each lasting five to ten seconds. The pain was such that every second felt like an eternity. The other two civilians were also tortured. The one RSF contacted said that a bag was put over his head to prevent him from breathing, and that he was beaten very violently.

The soldiers forced Nikita to write and sign a letter in which he declared his support for the Russian army and the invasion of Ukraine. He and the other two civilians were then taken – tied and blindfolded – to the basement of a house whose floor was filled with water. They were left there for two days until, after begging their guards to take them to a less cold place, they were finally moved. On 10 March, they were taken to the basement of another house, where they were joined by another prisoner, a former senior Ukrainian civil servant.

In this house, the four prisoners are interrogated by a different kind of soldier. Nikita was only able to see their legs and boots but this was enough for him to realise they were not members of combat units. Their clean, polished boots and ironed trousers suggested they might be FSB or GRU members.

On 12 March, the prisoners were told they would be released the next day. And on the 13th they were indeed driven away. Nikita was released in a forest after an hour’s drive. He thought they were going to execute him and he ran. But he heard no shots and reached a road. After being stopped by other Russian soldiers on the road, he feared he was going to be kidnapped again. But he managed to get into a car of Ukrainian civilians. “If you don’t take him,” a soldier told the reluctant civilians, “we’ll shoot him on the spot.”

Nikita still has bruises all over his body, a swollen leg and difficulty moving his hands as a result of the electric shocks. The doctor who examined him found hematomas on his head and body, a swelling of the right leg, and numbness of the limbs that could be the result of electric shocks. Noting that Nikita’s injuries were inflicted by the Russian army, the doctor went so far as to conclude that he had sustained “criminal trauma.” Nikita is now recovering. His family was able to escape.