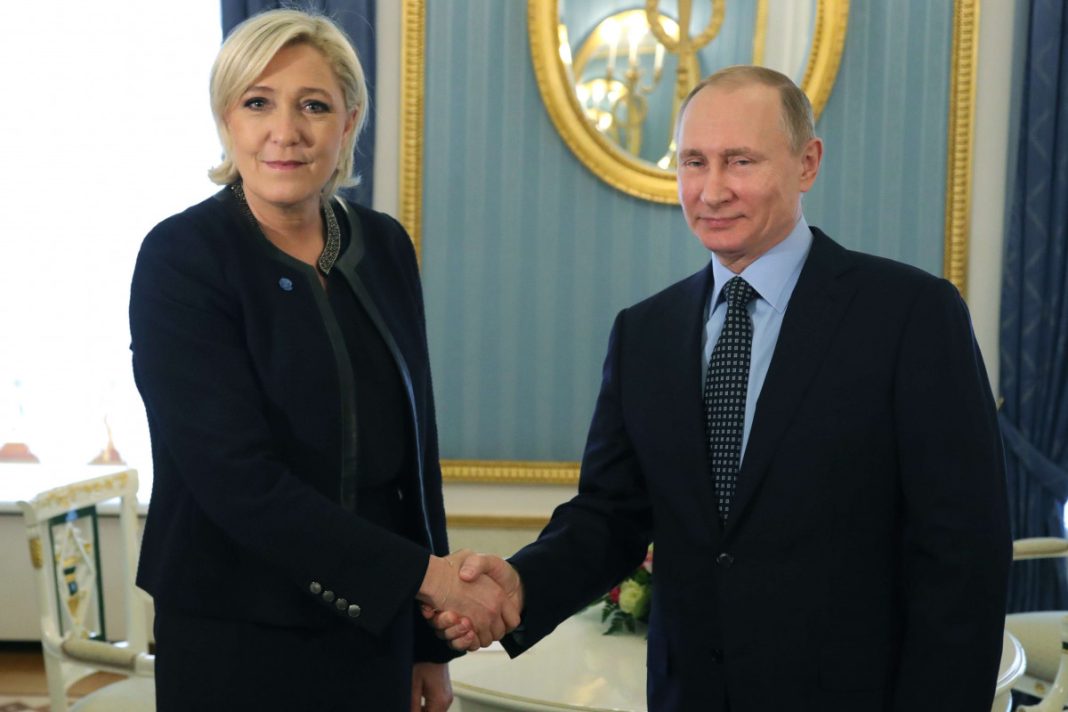 The savagery of Vladimir Putin’s assault on Ukrainian democracy has sent them into headlong retreat. Nothing better illustrates their panic than Marine Le Pen having to deny that she had ordered the destruction of 1.2m election leaflets that featured pictures of her giving Putin a firm handshake, as if to thank him for all the money he had loaned her.

Another French far right leader, Éric Zemmour, announced his affinity with the fascist tradition by defending Vichy’s collaboration with the Nazis and the persecutors of Alfred Dreyfus. With the first round of the French presidential election opening on 10 April, he returned the support the Kremlin has given him by saying that the French should not treat Putin’s victims as refugees because they would “submerge” France under a wave of immigration.

Cheeringly, Zemmour’s image of Ukrainians pushing French heads under water, as if they were aggressors rather than victims, did nothing to stop the decline in his support. In Hungary, the victory of the Putin wannabe Viktor Orbán in the elections on 3 April no longer seems the certainty it once was.

In the UK, the Labour leadership ordered MPs from the rump of the Corbyn left to disassociate themselves from a letter blaming Putin’s war on Nato or lose the whip. Even Donald Trump and Nigel Farage are backing away from Putin now and when rats that size abandon ship we know we are in uncharted waters.

Writers have struggled to find a label for the movements that have transformed the west. “Populist” is too vague. “Nationalist” works well until you remember that they hate large numbers of their fellow citizens and are more than willing to ally with their nations’ enemies. “Racist”? Certainly in some cases but how does that oft-repeated insult cover the religious sectarianism of a Modi or Erdoğan? “Fascist?” In the rhetorical echoes and common heritage, of course, but not in goose-stepping fact.

But they have all been “Putinist”, and not only because they have flattered the Kremlin.

The appeal of the Russian empire to parts of the far left remains both a cause of outrage and a pitiable demonstration of moral and intellectual decay. From Karl Marx to Oscar Wilde, every 19th-century liberal and socialist knew imperial Russia was the greatest fortress of European reaction. (Wilde was so moved by the struggle against it he wrote Vera; or, The Nihilists, a forgotten and truly terrible play to honour an attempt to assassinate the tsarist governor of St Petersburg.)

The appeal of Putin’s revival of tsarism to the modern far right may be grotesque but at least it makes sense. Putin is anti-democratic and so are they, as Orbán’s quasi-dictatorship and Trump’s attempts to overturn elections show. Putin despises human rights and so do they. Putin trades on a dark nostalgia and so do they. Above all, Putin is a strongman and it is as the tough guys who make their countries great again through a sheer act of will that they have sold themselves to tens of millions of voters.

Did I call them the “far right”? Forgive me, for “far right” doesn’t quite cover it. As I said, the Labour mainstream used the invasion to move against the tyrannophile left. We have seen nothing comparable on the supposedly mainstream right.

No pieces in the Mail or Telegraph agonising over how they ever came to be fooled by Farage and Arron Banks. No speeches from Boris Johnson warning against the seductions of tyrannical thinking and power worship. The silence shows that the border between the centre right and the far right has fallen into disrepair.

For Johnson also likes to pose as a strongman, who can get Brexit done. He too wallows in nostalgia for the past rather than hope for the future and defines himself against a large portion of his fellow countrymen: the remoaners, the naysayers, the libtards and the woke.

In the most desperate of circumstances, Ukraine cries to be allowed into the European Union, that same European Union a generation of unforgivably trivial Tories have dedicated their lives to destroying. Putin shows his fear of Russians learning the truth about his war by blocking their access to the BBC, the same BBC that Johnson underfunds and promises to ruin whenever he needs to toss red meat to the Tory right.

Predicting anything in this hellish week is a fool’s endeavour but of one thing I am sure: Putin has destroyed the appeal of strongman politics in the 2020s as effectively as Adolf Hitler and Josef Stalin did in the 1930s.

The career of Volodymyr Zelenskiy explains why. He has not played the Putinist game of divide and rule or created a personality cult. At his inauguration, he asked government workers to end the Soviet practice of putting pictures of the ruler on their office wall. “Hang your kids’ photos instead and look at them each time you are making a decision,” he said.

Just before Putin’s forces attacked, Zelenskiy appealed to Russians in their own language to reject Putin and emphasised his determination to protect Russian minorities in Ukraine. The broad appeal of his leadership helped create the broad resistance to invasion.

Tom Tugendhat, the chair of the foreign affairs select committee, told me there was nothing soppy about leaders doing all in their power to seek national unity. A nation’s resilience depends on governments seeking to avoid needless dividing lines. “We must unite the country in peacetime so we can defend ourselves in an emergency.”

We are now in an economic war that will send fuel and food prices ever higher. The poorest will hurt the most and in the name of national unity they deserve emergency help. Worse may be on the way than inflation and recession. As things stand, the most fitting epitaph to the Trumps, Farages and Le Pens who prostrated themselves before Putin is that if economic war is all he brings down on us, we can count ourselves lucky.

Nick Cohen is a London Guardian and Observer columnist