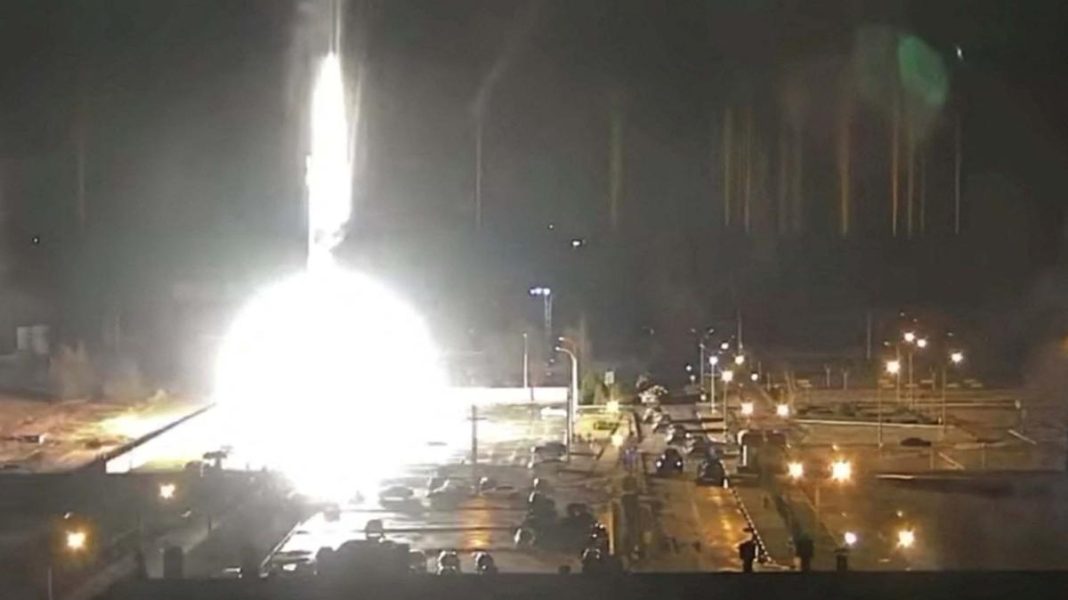 Nuclear blackmail? Employees there are working at gunpoint. Despite assurance earlier today (Friday) that the fire had been dealt with, the potential for problems here following the sudden shutting down of the reactors is real and present. Zaporizhzhia represents an existential threat to Europe. CNN report here, via Facebook.

The disaster potential for the Zaporizhzhia Nuclear Power Plant is ten times greater than that of Chernobyl, according to Ukrainian Minister of Foreign Affairs, Dmytro Kuleba. President Zelensky further warned a major explosion could spell the end of Europe. Fire broke out in an adjoining training building in the early hours of Friday after Europe’s biggest nuclear power station was shelled by Russian forces, Ukrainian authorities said.

Experts later played down the danger, saying the reactors were unaffected. The first report came from an employee at the plant, who posted on Telegram that Russian forces had fired on the facility and there was “a real threat of nuclear danger at the largest nuclear power plant in Europe”. But by breakfast time it appeared to be under control.

Reports were confirmed by Ukraine’s foreign minister 2.30am. He tweeted that Russians were “firing from all sides upon Zaporizhzhia NPP, the largest nuclear power plant in Europe. Fire has already broke out.” He called for an immediate ceasefire to allow firefighters to control the blaze. It is one of the ten biggest such plants in the world.

They later reported that the third power unit at the plant was disconnected at 2.26am, leaving just one of the plant’s six units, unit four, still operating.

Early reports of the incident at the power plant sent financial markets in Asia spiralling, with stocks tumbling and oil prices surging further.

Google guide to the the plant

Zaporizhzhia Nuclear Power Station (Ukrainian: Запорізька АЕС) in Enerhodar, Ukraine, is the largest nuclear power plant in Europe and among the 10 largest in the world. It is in southeastern Ukraine near the city of Enerhodar, on the southern shore of the Kakhovka Reservoir on the Dnieper river.

The plant has 6 VVER-1000 pressurized light water nuclear reactors (PWR), each fuelled with U235 (LEU). and generating 950 MWe, for a total power output of 5,700 MWe.The first five were successively brought online between 1985 and 1989, and the sixth was added in 1995. The plant generates nearly half of the country’s electricity derived from nuclear power, and more than a fifth of total electricity generated in Ukraine.

The Zaporizhzhia thermal power station is nearby.

On 3 March 2022 fires were reported as a result of the 2022 Russian invasion of Ukraine. Initial reports from the Ukrainian regulator of Nuclear Power to the International Atomic Energy Agency did not report any increased radiation at the site.