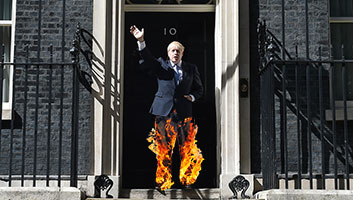 When Boris Johnson does finally leave the British political stage there will be more nails in the lid of his coffin than wood. “Cakegate” and a bristling agenda of soirées at Downing St were added to on Wednesday by something potentially even more damaging.

The latest imbroglio started the day before with a Downing Street denial. Most days seem to start this way. In this instance it was a denial that Johnson had personally authorised the controversial exfiltration of 200 cats and dogs from Kabul by a British animal charity. “Absolute nonsense,” said the PM himself. Then on Wednesday two Foreign Office emails emerged that appeared, in no uncertain terms, to contradict this.

The release of the emails prompted claims that the prime minister had lied again, adding a thick layer of icing to the birthday cake. An unnamed official from the private office of Minister and Johnson crony Zac Goldsmith, dated 25 August, was pushing for the rescue of a “second animal charity” because the prime minister had only just agreed to evacuate ex-Royal Marine Paul “Pen” Farthing’s Nowzad charity.

A senior Labour law spokesman, Chris Bryant, produced the email that “authorised” the animal evacuation. He also accused Downing Street of “covering up” the prime minister’s role in that operation, which took place as thousands of vulnerable Afghans scrambled to flee Taliban rule, including the AEJ’s Faisal Bardot.

This was in late August, at the height of the crisis. Farthing, a capable and feisty self-promoter had threatened to “fucking destroy” a government official who stood in his way. He operated the Nowzad animal charity and successfully campaigned to get British and Taliban officials to give his staff and animals safe passage to Kabul airport. Farthing eventually arrived in London on August 29 on a privately chartered flight with his animals, but not his staff.

Ben Wallace, the British Defence Secretary, sharply rebuked the whole operation saying it had “taken up too much time” in the middle of a humanitarian crisis and promised to prioritise people over pets. Johnson has denied intervening in the case but the correspondence, from a Conservative minister who is also a top aide to the prime minister, suggests that either Johnson had suffered a memory attack or had been, once again, economical with the truth.

Trudy Harrison wrote that she had received confirmation from various British government agencies that Farthing, his staff, their dependents and animals would be allowed to enter the airport and to leave on planes, according to Labour’s Bryant, who read out the letter in Parliament. Animals would be evacuated on a separate flight that Britain’s Ministry of Defence would give a departure slot to, the letter said.

“The prime minister’s fingers are all over this, aren’t they? And you’re just trying — I’m hesitant to use the words ‘cover up’ — but that’s what it feels like,” Bryant told officials.

Downing Street did not immediately return a request for comment. A spokesperson for Johnson told the Guardian that Harrison, who has been promoted to another role, was not acting in her capacity as an aide to the prime minister when she wrote the letter.

The animals were flown to safety as tens of thousands of Afghans and their families who might have been eligible for resettlement were left behind, according to testimony provided to Parliament by a whistleblower.

A British government whistleblower said thousands of emails from Afghans potentially eligible for flights out went unread by the Foreign Office and that the animals were prioritised over people in an airlift. Johnson had sent a request “to use considerable capacity to transport Nowzad’s animals,” Marshall said, and although the charity supplied its own plane, there was a “limited number of soldiers available to bring eligible people into the airport and limited capacity within the airport.”

Farthing has accused the whistleblower of lying and said on Twitter that British soldiers did not help him or the Nowzad animals get to the airport.

The AEJ’s contact on the ground, Faisal, is in hiding with his family. If he is caught none of them will stand a chance, he fears. He was promised he would be allowed out, then suddenly the gates of Kabul airport snapped shut.

“Good news for the dogs, for sure, but what will be the future of my children? What will become of my tiny children and poor parents if we fail to escape and get killed? And many, many others like us. It has been five months since the Taliban takeover but it feels like five years to me.  I fought for a decade to defend freedom of expression, human rights and democracy in the most dangerous country in the world, but where are the human rights defenders today to help us?

“I can’t feed my children or pay the rent and I expect any day to hear the Taliban knock at the door. I have sent many emails to hundreds of organisations and governments that our lives are in imminent danger, terrorist groups came to kill us, but none of them hear our cry. Unfortunately, humanity is dead. I am tired and disgusted with this world! No more words to say.”

The speaker of the House of Commons has also called in police to investigate reports that drug use is “rife” in the British Parliament — just as Johnson is promoting a tough new anti-drug strategy for the country. A lawmaker close to Johnson was also found to have broken rules on lobbying, prompting a debate about the levels of “sleaze” in British public life.