Austrian Chancellor resigns – or does he? 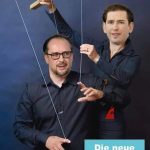 successor centrist-right party got into power – and stayed there.

Journalists today began a series of long, wearily familiar waits outside Vienna’s Hofburg presidential palace to see what happens next following the WKStA anti-corruption raids on Kurz’s and other party offices. Altogether, nine others in the Kurz “team” have been accused of corruption, along with the tainted Fellner brothers’ and their populist news organisation.

And in the background an ongoing pitched battle continues against the WKStA with claims by Kurz and allies that they are victims of a nakedly party-political agenda to unseat him. (Compare Silvio Berluscoini’s long campaign against the “Communist” judiciary.)

Chat-protocols from mobile phone had been selectively cherrypicked and quoted out of context, Kurz told state TV channel ORF. The ORF in turn fought back.

So did the WKStA, which last Friday released 500 pages of evidence, including dozens more embarrassing text messages. Across the political spectrum almost every Austrian with an interest in the affair has spent the weekend poring through the details –  professionally, out of fear of what comes next for them personally, or simple curiosity about an unusually juicy scandal with hints of a homosexual conspiracy at its centre, touched on in foreign media, in the background.

Kurz’s resignation is unlikely to be professionally suicidal, however. With his party and most of the population behind him, he will remain party leader and sit in parliament, fighting “with all my might” the allegations from there. And he has appointed his somewhat anodyne colleague, the career diplomat and present foreign minister, Alexander Schallenberg, 52, to take his place.

It is widely thought in Vienna that Kurz, whatever his title, will in reality remain, à la Putin, in charge of the party he transformed into the “New Austrian People’s Party”, sporting its new political colour, turquoise. What remains traditional is the fishiness of party finances in general, and especially the abuse of public money to manipulate the media.

That is the key issue for the AEJ – how weakened newspapers and other media have become dangerously dependent on state subsidies and advertising, as well as anonymous commercial backers, a subject we plan to investigate EU-wide over the next months. See also more encouraging news: first Nobel Prize for journalists.