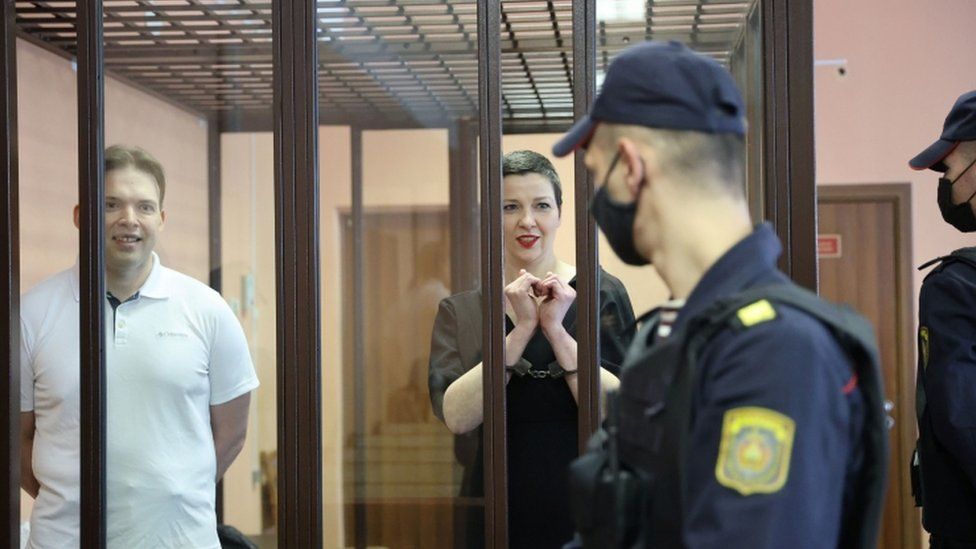 As the world focusses on Afghanistan, and the new Taliban government’s suppression of women’s rights  – they are now banned from playing sports – the grisly tragedy of Belarus continues.

Dictator Alexander Lukakashenko, who has “weaponised” a flood of refugees into neighbouring EU countries, and imprisoned the free media, this week handed down decade-long prison sentences to an opposition leader, a professional musician, and her lawyer. Both tried to challenge the shamelessly rigged August 2020 elections.

Maria Kolesnikova, 39, a flautist in the national orchestra, smiled a smile of moral authority as she was sentenced to 11 years on trumped-up charges of threatening national security, plotting to seize power, and being part of an extremist group.

As for the Kremlin, it signalled its iron rejection of such antics and the EU’s complaints by sending in jet fighters to help police the Belarusian border.

“The show trial crowns a year of repression and follows a wave of public protest at Mr Lukashenko’s rigged re-election in 2020 and the ensuing crackdown when tens of thousands were detained, beaten and forced into exile,” said a leading article in the London Times.

The official figure of 650 political prisoners held in Belarusian jails is almost certainly an underestimate. In May Lukashenko ordered fighter jets to divert a Ryanair passenger plane so that to arrest the journalist Roman Protasevich A Belarusian sprinter was ordered home from the Olympics after criticising the sport management. She defected instead.

To show that anyone else’s borders don’t interest Lukaskenko, an exile Belarusian dissident was found hanging in a Kiev park where he had been jogging.

“If the West wants to help Ms Kolesnikova then it needs to support the besieged civil society that she represents,”. concluded the Times article.

Meanwhile, the EU, notably Lithuania and Poland, is alarmed but effectively helpless in the face of the continued forcing out of refugees from Belarus to cause the West as much disruption as possible.

Link: Is this Russia’s latest secret weapon: The Havana syndrome?