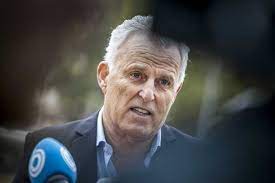 In yet another outrage against investigative reporters,  the internationally celebrated investigative journalist Peter R De Vries, 67, is today fighting for his life in Amsterdam. He was shot in the head in broad daylight  at 19.30 yesterday when he emerged from a TV studio.

Specialising in crime investigations, notably cold cases, he has won national and international awards, including an Emmy Award in 2008 for his documentary on the murder of an American schoolgirl on the Caribbean island of Aruba –  a case he himself solved.

Dutch Prime Minister Mark Rutte spoke of an attack on free journalism, an essential pillar of democracy, rule of law, and a free society, he said. It echoed his famous January 2015 speech on Dam Square are the Islamic killings in Paris  – “Keep your hands off our freedom”.

Welcoming the Dutch prime minister’s statement, AEJ President  Saia Tsaousidou  said today: “At least the police are on track to identify the would-be killers. But it is moe and more clear that gangs, especially those connected with drug-racketeering, are becoming so powerful that they are able to get away with murder – literally, in the case of Giorgos Karaivaz, gunned down in April. He was one of the very best. I hope at least that European governments get the message from Mr Rutte and EU Commissioner Jourova. Without honest journalism,our democracies will die in darkness.

Het Parool – which like all Dutch-language papers carried the story on its front page today –  reported that the police had not yet confirmed a suspected connection to the gang led by Ridouan Taghi – details in Deutsche Welle report. De Vries is currently the confidant of the key prosecution witness in an ongoing trial involving organized crime, murder, and drugs racketeering.

The two suspects for the attempted murder of De Vries are a 35-year-old with Polish citizenship from Maurik, south-eastern Holland, and a 21-year-old from Rotterdam. They were arrested only a few hours later on the A4 motorway about 60 kilometres from Amsterdam. During house searches in Rotterdam, Maurik and around Tiel, computers, phones, and ammunition were seized.

Attack on exiled Turkish journalist in Berlin on same night

Deutche Welle – Is the Netherlands becoming a “narco-state” ?

Assault on tv man in Kosovo