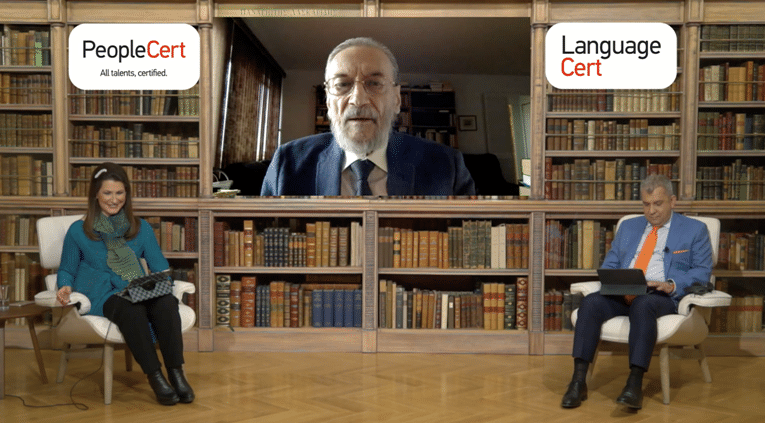 Athens, Greece: At a press conference  PeopleCert, a global leader in the development and delivery of examinations, announced the launch of the Global First Certification of Classical Greekby Language Cert, (a member of the PeopleCert Group)an Ofqual regulated awarding body dedicated to language skills assessment and certification. On the Bicentennial of the Greek Revolution, Mr. Byron Nicolaides, Chairman and CEO of PeopleCert, announced that all exams for the above certification will be offered free of charge.

“Our decision to proceed with the creation of the Classical Greek Certification is not only an expression of our love for Greece. It is a tribute to the language that kept Hellenism alive over the centuries, a language that is gaining ground internationally, which is loved and respected abroad. Finally, it is but a small contribution by a Greek company that may have become a global player, conducting millions of examinations in more than 212 countries worldwide, but never forgets its roots”, said Mr. Nicolaides.

Honorary guests, including recognised Classical Greek academics from around the world and the Greek Deputy Minister of Education, Ms. Zetta Makri, attended the press conference to discuss the findings of a new research study on the Greeks’ relationship and attitude toward the Classical Greek language. The author of “The Ingenious Language: Nine Epic Reasons to Love Greek”, Ms. Andrea Marcolongo, also delivered greeting remarks, congratulating PeopleCert on this initiative. “After the pandemic, I am more convinced than ever that Ancient Greek and the study of Classical Greek texts is a kind of ‘spiritual vaccination’ against discouragement, laziness and the loss of hope”.

Why is it important for someone to learn Classical Greek today? Mr. Nikolaides noted: “The Classical Greek language is the basis of European culture. It is a tool for thought”.

The LanguageCert Test of Classical Greek (LTCG) certification level A1 and A2 is a product especially designed for scholars and students. It is a valuable tool for those who want to integrate the historical, political and philosophical ideals of classical antiquity into modern life.

The product will be made available to the Greek and international market in May. More than 160 candidates from three countries, the majority of which were students, have already been tested, through online proctoring.

About PeopleCert and LanguageCert

LanguageCert is an Ofqual recognised Awarding Organisation dedicated to language skills assessment and certification. It is a UK-based company of PeopleCert Group, a global leader in the certification industry, that has been delivering millions of exams in more than200 countries.

LanguageCert develops its own qualifications and offers a comprehensive portfolio of high-quality English language certifications at all CEFR levels, catering to candidates wanting to study, work or live in English-speaking environments. For the delivery of its own qualifications, as well as for examinations delivered in collaboration with its partners, LanguageCert deploys state-of-the-art, innovative, and flexible exam administration technologies and systems developed by PeopleCert, which are tailor-made to each exam’s specific requirements.

LanguageCert is committed to serving its network of Approved Test Centres, and all language schools and teachers who prepare students for LanguageCert qualifications to world-class standards. The quality of its range of qualifications is continuously monitored and verified by an Advisory Council of world leading academics.