Information as a Public Good 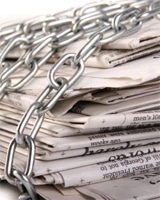 This year’s World Press Freedom Day   https://www.un.org/en/observances/press-freedom-day will take place with multiple events from April 29 to May 3, and the major events are open to all comers online.

The host country is Namibia, the birthplace of the landmark “Windhoek Declaration” of 30 years ago. On 3 May, 1991, as the apartheid regime in South Africa was crumbling and the Cold War was becoming history in Europe, African journalists met and laid down three key demands – for media freedom, media independence and media pluralism.

Their initiative laid the foundation for the UN to launch a global campaign around the proclamation of May 3 as World Press Freedom Day.

See below for details of the programme and the link to register to join events online. Key themes include the survival of independent and local media, enforcing the responsibilities of Internet giants, and public media literacy in the face of the “disinfodemic” and persecution of journalists through anti-media “fake news” laws.

# AEJ Sections that organise their own special Events around this this time, OR joint media freedom-related events with others, can register their event via the link below; and it will appear on UNESCO’s world map of WPF Day events.

For the AEJ, I have recorded and contributed, on request, a 5-minute video Message of Support for the courageous editor and journalist Maria Ressa in the Philippines as part of the global #HoldTheLine campaign on her behalf, headed by RSF, CPJ and ICFJ. A marathon 12-hour sequence of personal video messages from press freedom campaigners will be streamed online throughout 3rd May…

Maria Ressa is among the celebrated speakers at the extended international conference marking Press Freedom Day. So, for example, is Nick Clegg, the controversial UK politician-turned top executive of Facebook; and Agnes Callamard, the current S-G of Amnesty International; in 2019, in her role as the UN Special Rapporteur on Extrajudicial Killings, Agnes wrote a damning and influential report about judicial failures by Saudi Arabia and Turkey after the murder of Jamal Khashoggi in the Saudi Consulate in Istanbul the previous year, calling it a “pre-meditated execution”.

Professional journalists and other media stakeholders at the Conference will call for urgent measures to counter the threats that are weakening independent and local news media around the world, a crisis worsened by the COVID-19 pandemic. They will put forward solutions to bolster media viability, push for greater transparency from social media companies, and measures to improve the safety of journalists and support independent media. Participants are also expected to urge governments to invest in media and information literacy training to help people recognize, value, and defend fact-based journalism as an essential part of information as a public good.

Some 40 sessions will be held during the 5-day conference including three thematic discussions on issues currently affecting media viability, the transparency of online platforms, and ways to strengthen media and information literacy.

Hage Geingob, the President of Namibia, and UNESCO Director-General Audrey Azoulay will address the conference on 2 May, alongside senior African government officials and UN Secretary-General Antonio Guterres (through a video message).

Keynotes and interviews with over 250 world-renowned journalists, media, and tech leaders, experts, policy makers, and activists will be held during the event which be an opportunity for registered participants to network, and interact with speakers, and access an offering of podcasts, films, and artistic contributions on a conference online platform.

Notable speakers will include:

Notable programme highlights will include

The digital revolution has weakened business models of most independent media and damaged their viability   https://reutersinstitute.politics.ox.ac.uk/few-winners-many-losers-covid-19-pandemics-dramatic-and-unequal-impact-independent-news-media. The loss in revenue in 2020 is estimated to total US$30 billion.

Local news ‘deserts’  https://www.usnewsdeserts.com/ are becoming ever more common as media outlets close, merge, or downsize in many parts of the Global North and South, and political interest groups take control of struggling media outlets. Due to the COVID-19 disruption, two-thirds of staff and freelance journalists worldwide have also suffered pay cuts, lost revenue, job losses, cancelled commissions or worsening working conditions, according to a survey carried out by the International Federation of Journalists IFJ.

A survey https://www.icfj.org/our-work/journalism-and-pandemic-survey by the International Center for Journalists and the Tow Center at Columbia University found that over 40% of surveyed journalists reported losing more than half their income.

Online violence, often in the form of coordinated misogynistic attacks, goes from hateful language to threats of sexual or physical violence. According to the International Press Institute,  https://ipi.media/covid19-media-freedom-monitoring/countries have reported more than 400 media freedom violations linked to the COVID-19 crisis, including restrictions on access to information and excessive regulations against alleged fake news, ostensibly meant to address COVID-19 related disinformation.

The role of journalists in producing and sharing factual information is essential to all members of society. Whether exposing corruption, alerting us to conflicts or debunking disinformation on COVID-19, the information they provide must be recognized as a public good.

This year’s celebration of World Press Freedom also marks the 30th anniversary of the Windhoek Declaration,  https://en.unesco.org/news/30th-anniversary-windhoek-declaration developed by African journalists pressing for a free, independent, and pluralistic African press at a seminar organized by the UN and UNESCO in Windhoek in 1991. The declaration which triggered the proclamation of the 3rd May as World Press Freedom Day by the UN General Assembly. The Award Ceremony of the UNESCO/Guillermo Cano World Press Freedom Prize will take place on 2 May,

The Prize, unique in the UN system, honors a person, organization or institution that has made an outstanding contribution to the defense and, or promotion of press freedom anywhere in the world, especially in the face of danger.