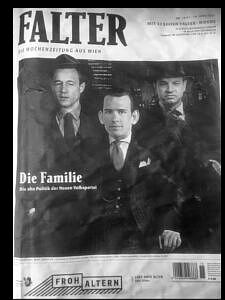 Chancellor Sebastian Kurz, under fire in Austria for attacks on the media, is to be honoured on May 11 with the German Freedom Medium Prize, to be presented by Greek Prime Minister Kyriakos Mitsotakis.

The prize is being awarded at a time when the Austrian Chancellor is being accused of creeping “Orbanisation” of the Austrian media. “I am a little puzzled by this,” commented AEJ President Saia Tsaousidou.

“The German award simply flies in the face of reality,” said Otmar Lahodynsky, until February her predecessor as  President. “Kurz has not expanded media freedom in Austria at all,” he said. “He has restricted it with message control by his bloated PR apparatus, preferential treatment for pro-government media, and most recently with underhanded attacks on Falter magazine.”

The Chancellor is also criticised for the lion’s share of advertising by state and state-related bodies going to mass-circulation tabloids media – last year over 100m €. “The serious media are left with the scraps,” said Lahodynsky.

Austria’s standing at 17 in the Reporters Without Borders’ (RsF) world ranking for press freedom has gone up by one place. But Kurz’s lawsuit against the liberal Falter and his “dozens of message-controllers” (Rubina Möhring, head of RsF in Austria) is unlikely to raise its status.

On top of that, Kurz is embroiled in controversy over the Wiener Zeitung. Founded by the monarchy in 1703 and still state-owned, it is now set to be closed down. The oldest daily in the world, it is the subject of an AEJ-led campaign international campaign to save it.

The prize is said by the organisers, the Weimer Media Group (WMG), to honour “a bridge builder of Europe and communicator of freedom.” The group declines to reveal who made up the seven-man jury that decided on the winner.

The opposition parties SPÖ and FPÖ called Kurz’s award “absurd” and even “grotesque”.