What is Speak Justice?

More than 660 journalists have been murdered since 1992. Their killers have for the most part evaded punishment. Reporting on corruption, crime, conflict, and politics has proven deadly for too many. Threats and kidnappings escalate into killings, a fatal yet avoidable outcome cemented by weak or indifferent authorities who feed a cycle of impunity. In 90 percent of the cases, no perpetrator has been brought to justice. 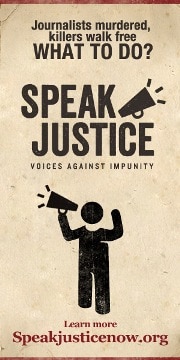 This silencing message fosters self-censorship. It weakens the ability of the press to hold power to account and suppresses public scrutiny of sensitive issues.

Speak Justice: Voices Against Impunity is an opportunity to break the cycle by demanding justice for murdered journalists. Empower impactful reporting and shield reporters from reprisal.

www.speakjusticenow.org >, will feature interactive maps and an info-graphic video, showing that journalists murdered around the world were reporting primarily on politics, corruption, conflict, crime and human rights: issues of vital concern to any citizen. Anyone can lend their voice by becoming an e-advocate. Our logic: demanding justice for murdered journalists will serve to empower those still reporting to do so without fear because a vigilant public cares about what happens to journalists.

The campaign is powered by CPJ in collaboration with global and local partner organizations as well as concerned individuals. Speak Justice is underwritten by The John S. and James L. Knight Foundation and supported by individual donations.

In 2013, we will launch country pages for priority countries: Mexico, Pakistan, Philippines and Russia (in English and local languages).

Periodically, we will link to news and also to actions of partner organizations (around trials, anniversary of killings etc.) and/or generate petitions around the cases.

Additionally, during the campaign’s initial phase, we will request online donations to support the families of journalists who have been murdered. Funds will help families cover expenses such as legal fees and costs associated with their efforts to pursue justice.