Irish Presidency of EU to focus jobs and growth – Taoiseach 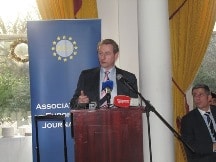 He said that on a recent visit to Vienna he had met Austrian Chancellor Werner Faymann, who took him to a youth centre and showed him how the guarantee of youth employment or further education or training works in that country.

Referring to controversies concerning the Budget, he said: “This has not been an easy budget (…) but then that’s the job you have in government. It would be very easy to prepare a budget in 10 or 15 minutes provided (…) you had a mountain of somebody else’s money to spend and no need for accountability in the way that is required now.”

There was a record attendance – in excess of 70 – for the Taoiseach’s address in the Stephen’s Green Hibernian Club.