New York, December 6, 2012—An average of 30 journalists are murdered each year in direct reprisal for their work, and the perpetrators are almost never brought to justice. To fight impunity in press killings, the Committee to Protect Journalists has launched Speak Justice: Voices Against Impunity, a new digital platform to help break the cycle of fear and censorship.

“In the past 20 years, more than 660 journalists have been assassinated for exposing abuses of power, crime, and human rights violations. Authorities routinely allow their killers to walk free,” said CPJ Impunity Campaign Coordinator María Salazar-Ferro. “The killers’ message is clear:  Journalists must be silent or die. But our collective voices counter that message by prompting action from authorities and ensuring that press murders are fully investigated and prosecuted.” 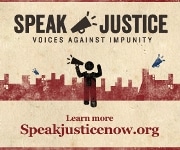 Threats and abductions escalate into killings, a fatal yet avoidable outcome cemented by weak or indifferent authorities who feed a cycle of impunity, CPJ research shows. This silencing message fosters self-censorship and weakens the ability of the press to hold governments to account.

CPJ’s new website, www.speakjusticenow.org, features interactive maps and an infographic video showing where journalists have been murdered around the world and the issues they had covered. The site includes profiles that capture the stories of killed journalists, which can be shared in solidarity. E-advocates can sign up to receive news and action alerts. Visitors to the site can also support the families of murdered journalists with funds to cover expenses, such as the legal fees and costs associated with their efforts to pursue justice.

“Reporting on politics, corruption, conflict, crime, and human rights has proven deadly for too many journalists who gave voice to underreported problems and exposed important truths,” said Salazar-Ferro. “Demanding justice for murdered journalists will serve to empower those who are still reporting to do so without fear. The silencing of journalists is an attack against an informed citizenry.”