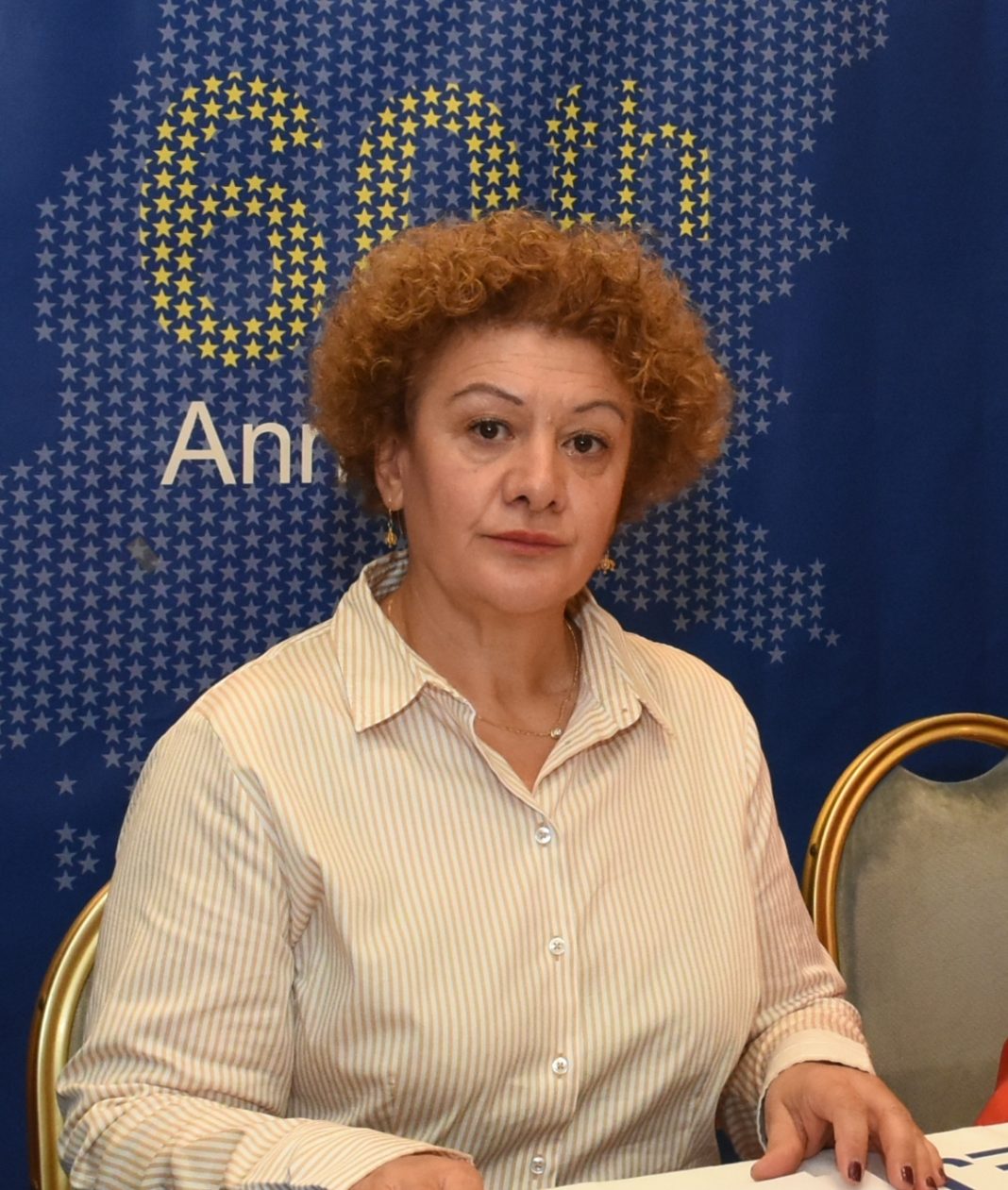 The Greek journalist Isaia Tsaousidou, President of the Greek Section of the AEJ, was re-elected to the Presidency of the International Board of AEJ

The International Congress of the Association of European Journalists held in Eretria with great success with the assistance and support of the Region of Central Greece and the Office of the European Parliament in Greece was a great success. The Congress coincided with the 60th anniversary of the foundation of the International Board of the Association of European Journalists and the 40th anniversary of the Greek Section.

During the visit of the 80 guest foreign journalists from 26-30/10/22 in Greece, they had the opportunity to visit emblematic monuments of the Region of Central Greece as well as businesses with an extroverted nature in order to highlight the comparative advantages of the region. Delphi, martyrdom Distomo, Orchomenos, St John the Russian, the Museum of Asia Minor Culture welcomed, hosted and guided the colleagues from Europe, America and Vietnam.

In the context of the extroversion of Greek companies, special mention was made of ELVAL HALCOR and the PALLIROIA Company as well as a visit to DIRPHYS Mushrooms. On Saturday, October 29, the Annual Congress of AEJ took place on the topic: “Journalism in Peace and War”, while the topic of the local development of Central Greece was also discussed. In her introductory speech, the President Saia Tsaousidou set the tone for the conference by saying that the Association of European Journalists has been fighting for 60 consecutive years for the freedom and independence of the media. The conference was greeted by Fanis Spanos, Regional Governor of Central Greece, Yiannis Dimitropoulos, Mayor of Eretria, Anna Efstathiou, Press Officer of the European Parliament in Greece, while a taped message was sent by Vera Jourova, EU Vice-President and Commissioner for Values ​​and Transparency, as well as the MEP Anna Michel Asimakopoulou. The first panel was dedicated to the development of the Region of Central Greece. More specifically, Andreas Loukatos, CEO of Oinophyta Asopos Business Park and Secretary General of the Central Greece Industry Association deployed his vision for the region, while Giorgos Mavraganis, Director of Strategic Planning at Elval Halcor, spoke about the development and the importance of extroversion for Greek companies. He also shared Elval Halcor’s vision for a sustainable world.

Afterwards, Giorgos Simopoulos, Director of STAR TV Central Greece, spoke about the role of regional television and emphasized that STAR TV has done a lot for the region, while it still does not have the ability to broadcast in high definition like the other Greek channels. Spyros Latsas, Journalist and member of the Board of Directors of EEDAD, spoke about the contribution of regional media to the development of local society. 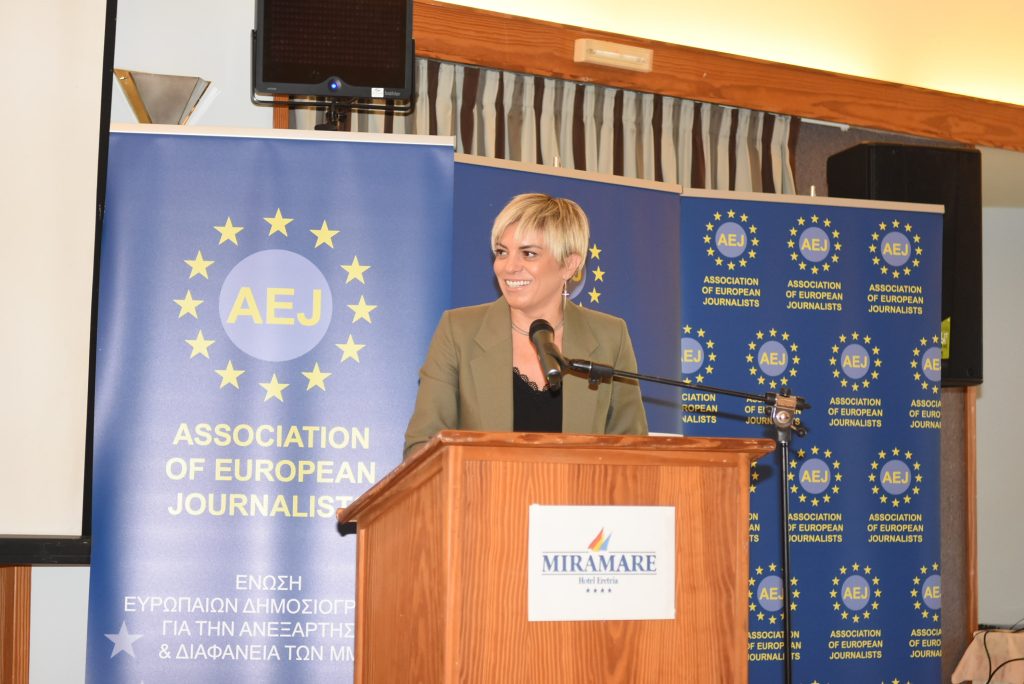 Sofia Nikolaou, Former Secretary General of Anti-Criminal Policy of the Ministry of Citizen Protection spoke about journalism and defamation. Mrs. Nikolaou analyzed the relevant international jurisprudence and emphasized that it is very difficult to distinguish between legitimate criticism of a public figure and slander. 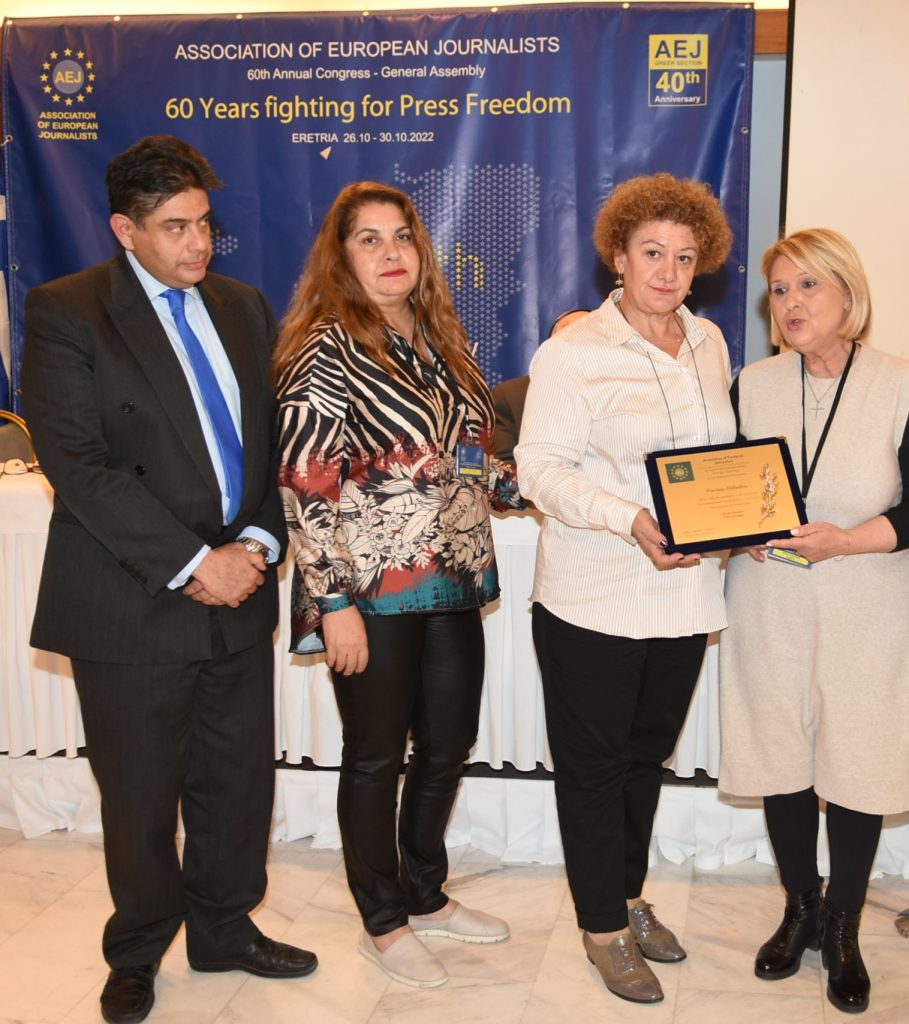 The second panel of the congress dealt with the war in Ukraine, the media and disinformation. Sofia Voultepsi, Journalist and Deputy Minister of Immigration spoke about the propaganda in the war and the role of journalists who must reveal the truth. As she said, there are just and unjust wars. In just wars, propaganda and censorship are intended to maintain the high morale of the people and the army and to prevent the leakage of information to the enemy, while in unjust wars, propaganda and censorship are intended to enforce the so-called “dominant view”, to justify the war and to hide its real causes, which are never humanitarian.

Dr. Panagiotis Sfaelos, Secretary General of the Greek Section of AEJ spoke about the war in Ukraine and the critical role of the media in providing accurate information and fighting fake news. As he pointed out, propaganda and deliberate disinformation are weapons of a hybrid war. He analyzed the propaganda techniques used by Russia and stressed that journalists have a duty to serve the truth. The role of the media, especially in wartime, is to conduct critical and scrutinizing research, as these decisions have a huge impact on the delicate balances of international relations. Journalists have a duty to provide information that helps the public to understand what is happening and engage with as many aspects of each news story as possible in order to avoid fake news. The news must be verified and cross-referenced to inform the world accurately and objectively. 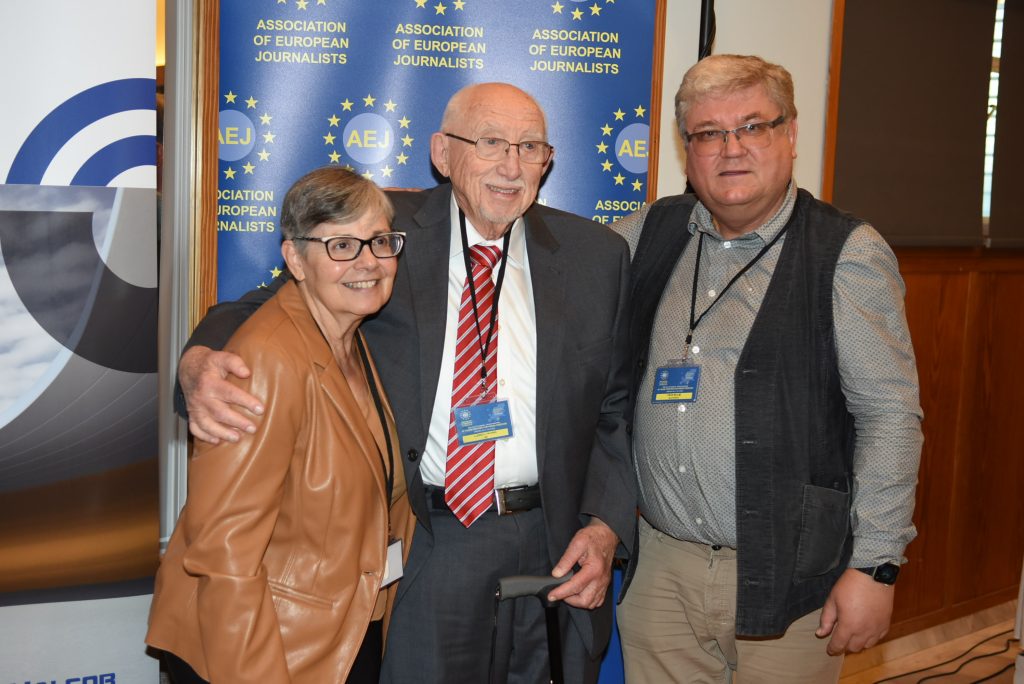 Llewellyn King, renowned Journalist, founder and producer of “White House Chronicle” on PBS, Columnist at Inside Sources Syndicate, Forbes, and Main Commentator on Sirius XM Radio spoke about the energy crisis as a result of the war in Ukraine. As he said, the war has changed the geopolitical facts, resulting in a lack of energy security and sufficiency.

Khoa Le, Journalist from Vietnam and founder of the news site www.thoibao.de and Tibor Macack, RTVS Journalist and AEJ Vice President spoke about the uses and abuses of digital technologies.

Afterwards, the award-winning photojournalist and President of the Union of Photojournalists, Vassilios Koutroumanos, spoke about Mariupol in Ukraine, where he has done countless missions. He referred to the centuries-old Greeks in the region and the persecutions they have suffered. He shared his experiences and impressions with his colleagues and emphasized that the war brought a lot of suffering to Ukraine. He also spoke about his exhibition with photos from Ukraine entitled: “The Peaceful Mariupol of the Greeks“, which was hosted at the conference and impressed Greek and foreign journalists. He did not fail to mention the creation of the school library in the Greek village of Sartana of Mariupoli, which was done on his own initiative. 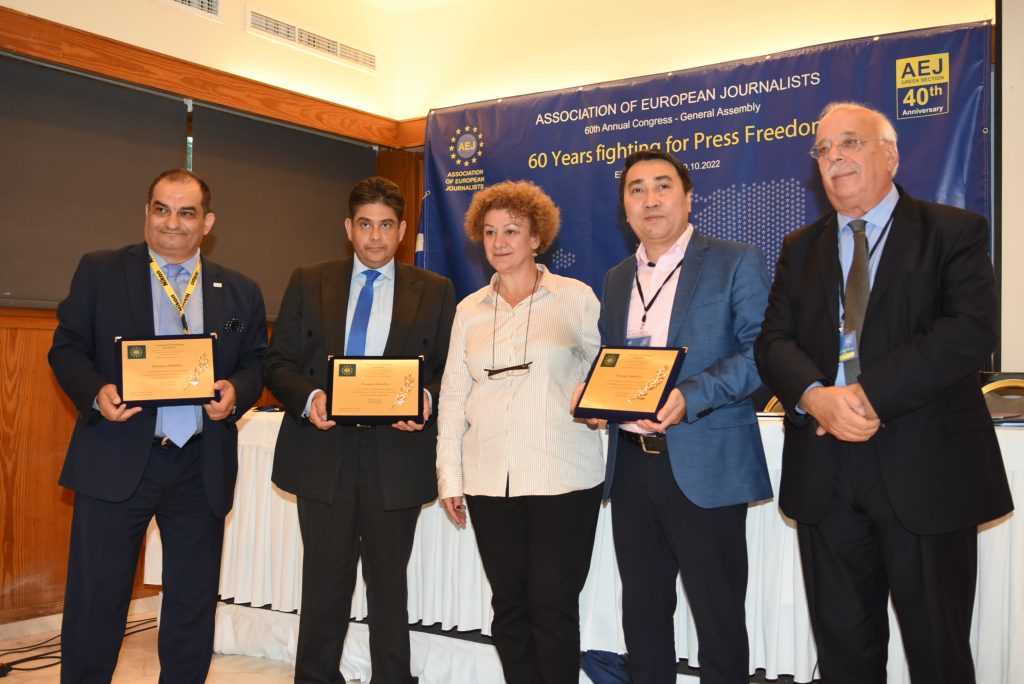 Journalist Lena Kyropoulos presented a documentary on Ukraine which will be shown on NETFLIX and other platforms.

The last panel was dedicated to the Freedom of the Press. Kyriakos Pieridis, Journalist and Press Freedom Representative of AEJ and Hasan Kahvecioglou Turkish Cypriot journalist spoke about the current situation in Cyprus and its impact on peace and stability in the region and the role of the media. Speakers referred to Erdogan’s threats and ban on entry of journalists to Turkey. Esra Aygin and Katerina Gennari spoke about the bi-communal relationship of journalists in Cyprus. As they pointed out, the media in the occupied territories are fully controlled by Turkey. Sami Ozulu and Loukianos Lyritsas spoke about the challenges for media freedom and pluralism in Cyprus.

Irina Nedeva, Journalist and President of the Bulgarian Section of AEJ, Fake News Expert and Presenter on the Bulgarian Radio spoke about media freedom in Europe.

Edward Steen, Secretary General of AEJ presented the investigation that the Association of European Journalists has done on the scandal of the ‘golden passports’ in Europe.

The Congress ended with the Honorary International President of AEJ, Otmar Lahodynsky, who referred to the achievements of AEJ over the last 60 years. He stressed the need to renew the Association by enrolling young journalists in all the sections. 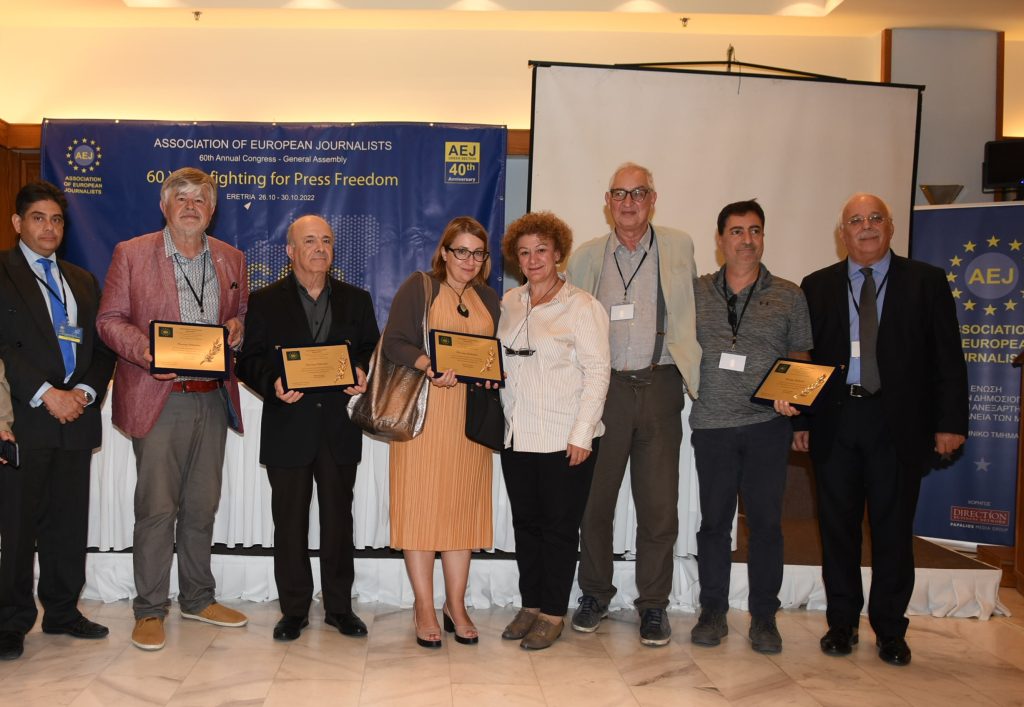 Finally, the English journalist Kevin d’Arcy presented his book The hidden world of media and emphasized that reliable media is essential for the effective participation of people in society.

During the Congress, all those who contributed to the successful outcome of the conference and in general to the success of AEJ were given honorary awards. 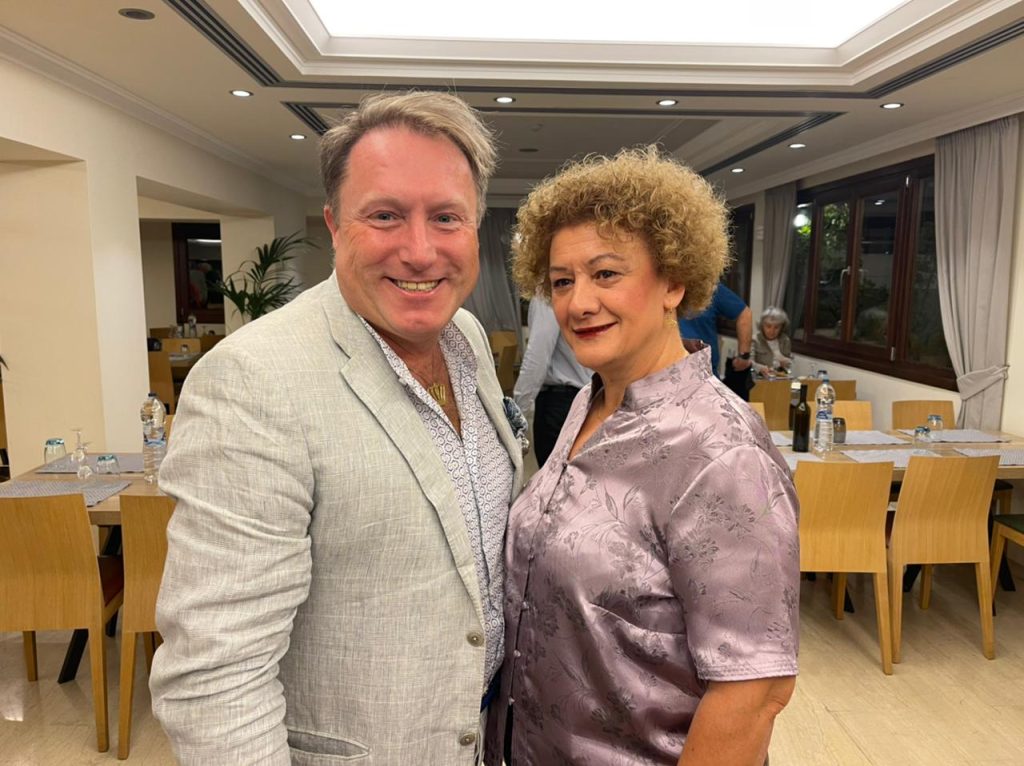 The Congress closed with a surprise by the famous pastry chef, Michael Lewis-Anderson exclusively for the event. He created two cakes to celebrate in the best way the double birthday of the Association of European Journalists. The journalists renewed their appointment for next year in another European city.

The media represented at the conference were:

Sponsors of the Conference

Union of Shopkeepers of Evia

Wines from the Muses Estate, courtesy of the Chamber of Boeotia

The bag packs were provided by ELVALHALKOR