Iran: seeing things from every angle The electronic, invisible hum which now pervades the world’s ether has become one of the most useful sources for journalists. The past few days have seen increasing information emerging from the defiant women (mainly) outrage over the savage death of Mahsa Amiri ,22, after being bashed over the head by the “Guidance Patrol”, Iran’s Morality Police, for the offence of allowing some of her hair to show from under her hijab. The New York Times, already well ahead of its rivals in making use of multi-media in its striking presentation of news, described how it has covered the protests erupting in more than 80 cities across Iran.Today (08/10) came news of further strikes and demonstrations spreading in four further cities. 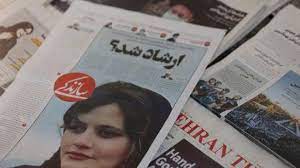 Footage of the demonstrations posted to social media – its significance also noted by Iran experts at Duke university – has for the NYT become one of the primary windows into what is really happening on the ground and what is different about this latest show of resistance inside Iran:

“The New York Times analyzed dozens of videos and spoke with experts who have followed the country’s protest movements to understand what insights the often blurry, pixelated footage contains about what is propelling the demonstrations.

“Many of the videos appeared on social media during the first week of the protests – now in their third week – before Iran’s government began limiting internet access in an effort to silence dissent… ” See more.