Kilic – opening the way with words 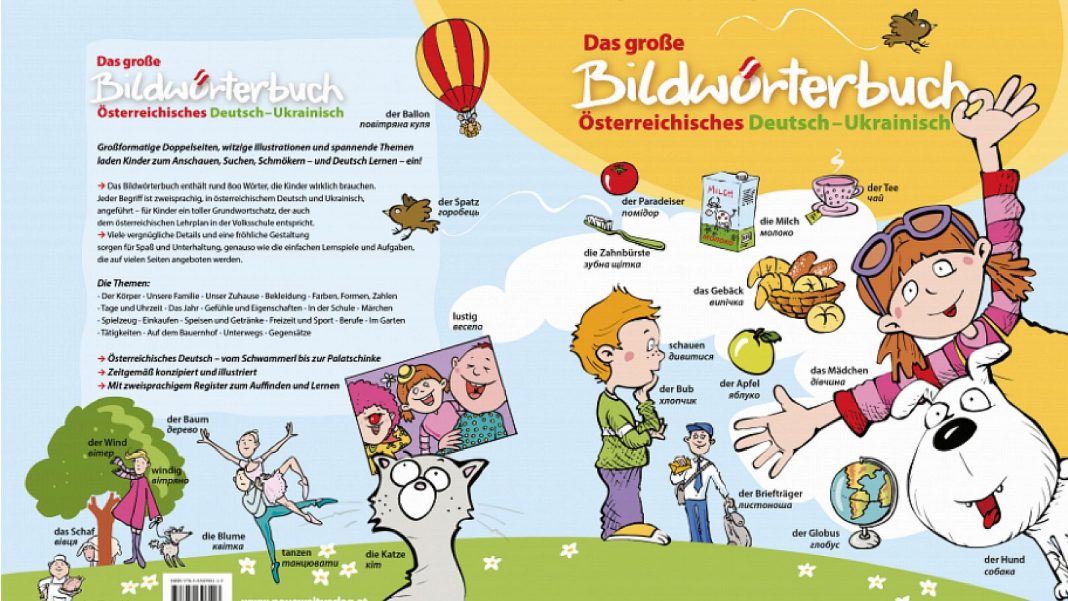 A new “picture dictionary” to help Ukrainian children learn German has been published in Vienna by the celebrated Turkish-Viennese journalist and publisher Birol Kilic, member of Austrian AEJ-section.

“We hope to ease the pain of the families and children with beautiful pictures,” says Birol Kilic, who was born in Istanbul, studied medicine and electronic engineering, and has lived in Vienna for some 30 years. “Large-format double pages, funny illustrations, and exciting topics invite Ukrainian-speaking children to look, search, browse – and learn German!” Thus, terms of everyday life are shown and explained in both languages in chapters such as “The Body”, “Our Family”; “Colours, Shapes, Numbers”, “Food and Drinks” or “Professions” and “Opposites”.

Das große Bildwörterbuch Österreichisches Deutsch-Ukrainisch is published by his Neue Welt Verlag,
and contains around 800 words “that children really need”. The basic vocabulary corresponds to the curriculum in Austrian primary schools “so that they can find it a little easier to get started in their new home,” Birol says. The retail price will be around 20 euros.

Distribution is supported by partners including Caritas and the communication services of APA-Comm, the publishing house of the daily newspaper Die Presse, Birol’s Neue Heimat Zeitung, and of course by the AEJ of which Birol is a longstanding member.

Kilic founded Neue Heimat Zeitung in 1999. Its aim is explicitly to bring Austria closer to its new compatriots and to counteract prejudices. “Even as an immigrant you can achieve something in your new homeland”, he says.

A few days ago he was awarded the title of professor by the Ministry of Culture in a ceremony at the Vienna Künstlerhaus by decree of the Federal Austrian President for his many years of work as a publicist, editor, and publisher, as well as his activities with numerous NGOs, including as chairman of the Turkish Cultural Community in Austria. It was presented by Jürgen Meindl, Head of the Arts and Culture Section of the Federal Ministry, and former ambassador to Belgium. “History would have been so much simpler if we’d known people like Birol Kilic” before, he said.

Journalist and writer Otmar Lahodynsky, now AEJ honorary president, said in a laudatory speech:  “He is an advocate of the free democratic and secular basic order. And he is not afraid to point out problems and aberrations, founding newspapers and publishing countless books.

“The Neue Welt publishing house and monthly newspapers he founded have been providing important information to the Austro-Turkish community since 1999, but also to the Viennese. …The fact that many Turks had themselves vaccinated against Corona is largely due to his information. The Austrian Turkish Business Club has also helped Turks to set up SMEs and businesses.

Prof Kilic responded: “Thank you Republic of Austria, with its liberal, democratic, constitutional and explicitly secular basic order, you have created a space for me where I have not only been able to breathe healthily, think, study, research, write, discuss, criticise and organise for the past 30 years, but also to exercise my profession constructively and purposefully in peace and tranquillity…”

Birol Kilic was born in Istanbul where he studied medicine, and then electrical engineering at Vienna Technical University. He completed his studies in 1993 as a graduate engineer in news technology and as a biomedical engineer. He also worked as a correspondent for Turkish radio and television, publishing commentaries and analyses in the liberal daily Sabah, as well as on the television channel ATV. He also founded several new  companies and NGOs and the Neue Welt Verlag (New World Publishing House), where he publishes unsubsidised scientific and cultural-historical books. The magazine Einspruch was also his idea, and he now setting up yet another new newspaper, Türkische Allgemeine.