Ukraine – journalists behind the lines

Bellingcat founder Eliot Higgins today revealed what he calls an “Anatomy of a Russian Separatist False Flag –  a highly-convincing video posted on the People’s Militia of the “Donetsk People’s Republic” Telegram service. It claims to show a sabotage operation targeting chlorine tanks.

“They claimed that Polish-speaking saboteurs” planned to blow up a tank with chlorine on the territory of a sewage treatment plant near the city of Gorlovka,” Higgins said on Twitter. The video had supposedly been recovered from the saboteurs’ bodies. This is the message from the “People’s Republic” that accompanied it: 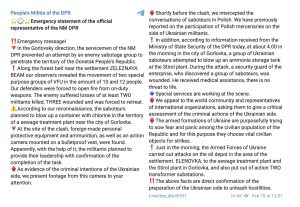 Not for the first time, Bellingcat is proving as effective as any other organisation, and even on-the-ground reporters, in exposing the poisonous nonsense with which the West – and not just the West – is now confronted.

Putin’s vault to power in 1999 came with his confrontation with Chechnya, accused of being behind the blowing up of four apartment blocks. They resulted in the deaths of 94 people in Moscow in their sleep and at least 283 others across Russia. Was that, as many analysts argue, a bloody and cynical falsehood, engineered with the help of the FSB (formerly KGB)?

Meanwhile, the threat of a real full-scale war against Ukraine, for purely confected reasons, continued today, Russian exercises continuing and exposing the ultimate disunity and confusion of the West.

Putin may well, as former Ukrainian president Petro Poroshenko argues, seize the opportunities offered by the violent chaos he has engineered. The aim: to win back more of the old USSR, alias Russian empire which he openly misses. Beyond the work of Bellingcat and other internet sleuths, it is hard to know what is really going on.

A small protest in Moscow against Putin’s actions was quickly suffocated by the police. In Kyiv mass-protests continue. But for most Russians, argues The Moscow Times , this imbroglio is just part of a gloomy “new normal”.