Ukraine and the shifting sands of diplomatic insults 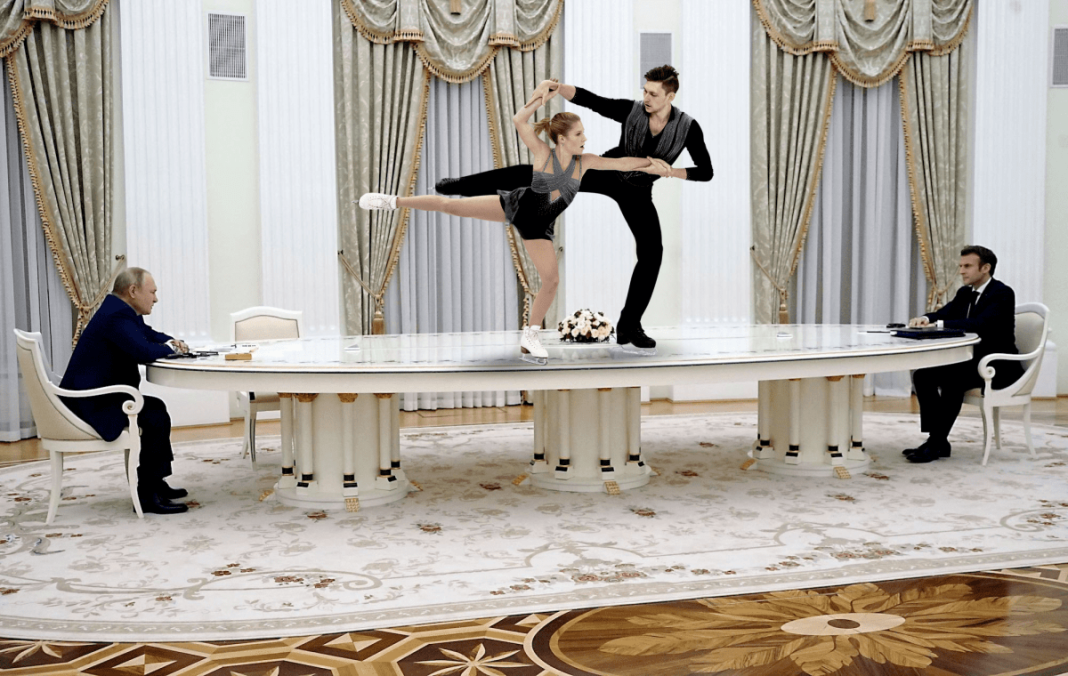 President Putin is notorious for arriving late for meetings with foreign heads of state, as far back as 2007 turning up for a meeting with then-Chancellor Angela Merkel not only late, but with a Labrador, well aware of her aversion to dogs.

He was 90 minutes late for his meeting on Monday night (07/02/22) with French President Emmanuel Macron, and then spun an opposite line to his visitor at the subsequent press conference. The crazily long table at which they sat for almost six hours was hardly a coincidence either, launching some memorable memes.

Later in the week Liz Truss, Her Majesty’s Secretary of State for Foreign, Commonwealth and Development Affairs, sashayed into a meeting in Moscow with the Russian Foreign Minister, Sergei Lavrov, pretending to be the reincarnation of Mrs Thatcher. She huffed and she puffed and outlined what would and would not be tolerated by her government.

Lavrov, a wily old hand, asked casually if Britain recognised Russian sovereignty over the Rostov and Voronezh regions. To which the woefully underbriefed new minister replied: “The UK will never recognise Russian sovereignty over these two regions.” It was left to the British Ambassador to point out, to the hilarity of the Russians and the embarrassment of the visitors, that they were both in Russia. Famously and historically Russian.

None of this sort of thing is entirely new in the diplomatic history of the region. In 1676, the Ottoman Sultan Mehmed IV, son of a Ukrainian concubine, launched his armies into what is now Ukraine and southern Russia. This was the home of the freebooting Cossacks.

One Cossack band, the Zaporozhians, received an ultimatum to surrender couched in pompous, flowery language. They responded with a stream of colourful insults echoing the sultan’s glorified titles.

These included “catamite of Tartary, fool of all the world and underworld, an idiot before God, grandson of the Serpent.” Less repeatable were suggestions that the great Sultan did indecent things with his mother and various farm animals.

Last year’s Sofagate snub by Turkish president Erdogan, by contrast, was more memorable. EU Commission head Ursula von der Leyen said she felt “hurt” and “alone” after being left without a seat in Ankara at meeting with Erdogan and European Council President, Charles Michel. The incident reflects a bigger problem with gender equality, according to the top EU official. And the Italian Prime Minister Mario Draghi was moved to describe Erdogan as a “dictator” on Thursday evening. He said he was “displeased” by Erdogan’s treatment of von der Leyen.

At a G8 summit David Cameron came to Ireland’s County Fermanagh promising to talk tough on tax, Syria and more, and to prove his macho credentials rose early on the first morning to take an invigorating swim in Lough Erne.

The Guardian reported: “There had been speculation that Vladimir Putin, who makes a habit of tough-guy open water swims, might be tempted to don his trunks and take a dip in the lough during the G8 summit, but after tense late-night negotiations on the Syrian conflict, the Russian leader seemed content this time to stay in bed.”

Cameron took the plunge shortly after dawn, describing the swim as an ideal way to prepare for negotiating with world leaders. Speaking at the summit’s closing press conference, Cameron said: “As for how to prepare for a hard day’s negotiations, I can recommend a swim in the lough,” before cautioning that he would not be sharing pictures. “I have the photographic evidence but I’m not going to share it with any of you. It certainly wakes you up in the morning and gets you going for a hard day of chairing these meetings.”

The macho goings on prompted Italian leader Silvio Berlusconi to hand around pictures of himself going swimming with a host of young ladies in a pair of bright red Speedo swimming trunks, known as “budgie smugglers.”