by Askold Krushelnycky in Washington

Belarusian dictator, Alexander Lukashenko, has been luring thousands of refugees from the Middle East since the summer with promises that they could cross over his borders with European Union members Poland and Lithuania. 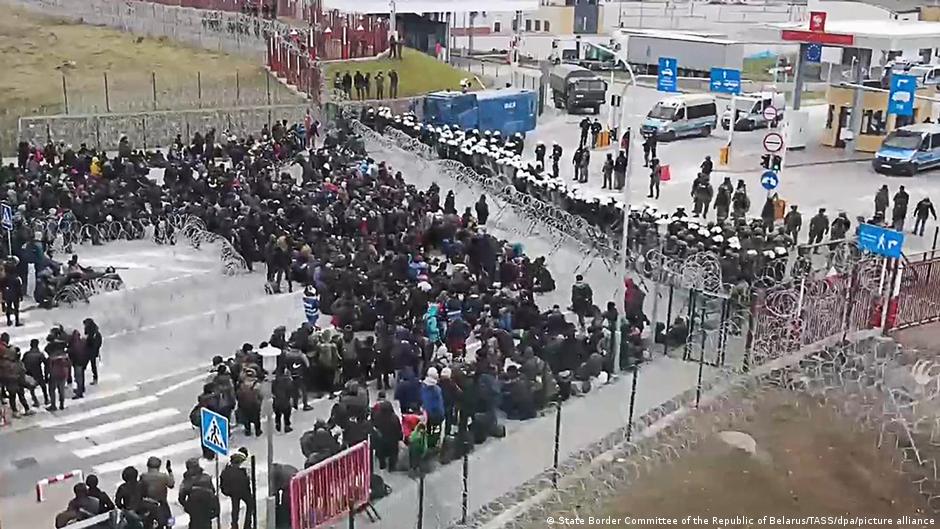 Poland has borne the brunt of would-be migrants’ attempts to cross illegally into the EU. Polish forces have set up barbed wire barricades to prevent a mass influx of refugees guided to vulnerable parts of the border by Belarusian police and soldiers.

Thousands of desperate men, women and children are now trapped in freezing conditions and with little food or shelter in the no-man’s land between the two countries.

Lukashenko’s intention was to punish the EU for imposing sanctions against his regime and pressure Brussels to ease the measures, and it is fairly certain that he did not embark on this course without Russian approval.

The humanitarian crisis has the hallmarks of a Russian hybrid warfare operation, this time weaponising human misery.

Russia first experimented using refugees as pawns some years ago in order to signal anger at Norway for allowing NATO training in its Arctic areas. This it did by enabling migrants to illegally cross the border from Russia into Norway.

The EU imposed sanctions after a Belarusian jet fighter forced a civilian airliner overflying the country to land in the capital, Minsk, so one of its passengers, a prominent critic of Lukashenko, could be arrested.

Demonstrators were killed, tortured or made to disappear by Lukashenko’s security forces, who have previously been implicated in murdering his political opponents. A UN Human Rights Office statement last September spoke of more than 450 cases of torture and abuse of detainees by Belarusian authorities. Also journalists reporting events have been targeted by Belarusian authorities and some jailed.

Since July, Belarusian authorities have issued visas to thousands of refugees from the Middle East, many from Iraq and Kurdish areas, who have paid thousands of dollars to fly to Belarus and taken them to cross the country’s borders with Poland, Lithuania and Latvia.

The refugees have been blocked from entering at legal crossing points and many of them have tried to break through by force. Some have been killed in clashes with authorities blocking their path and others have died from hypothermia after hiding in forests.

The Belarus authorities have been gathering large groups of refugees for concerted efforts to force their way through the border. U.K Prime Minister Boris Johnson has sent British soldiers to assist the Poles. He accused Lukashenko of an “abhorrent” attempt to undermine European unity.

“When our Polish friends asked for our help to deal with a contrived crisis on their border with Belarus, we were quick to respond,” he said.

Russia has been Lukashenko’s supporter and protector since he came to power in 1994 and Moscow already extensively controls the country in practice. An as yet, un-implemented “union agreement” was proposed by Lukashenko in 1996 and could provide cover for a swift Russian takeover of Belarus.

The political turmoil following the 2020 election has made Lukashenko completely dependent on Russian President Vladimir Putin for his survival.

In a sign of his obeisance toward Putin, Lukashenko has become increasingly belligerent toward Ukraine and asked for Russia to station missiles on the Belarus-Ukraine border. That signalled he would make his country a willing launching pad for aggression against Ukraine.

Russia has bolstered its presence in Belarus and conducted extensive training manoeuvres twice this year, including in October in joint airborne exercises. The military exercises with Belarus served as cover for Russia to build up its forces in that country and along other areas close to Ukraine’s borders, prompting fears that Moscow may launch a bigger version of its 2014 invasion of Ukraine.

Ukrainian and other analysts believe part of the purpose of the manufactured migrant crisis is to distract attention from the Russian military buildup threatening Ukraine.

Angela Merkel and Lukashenko spoke twice this week to discuss the crisis with a view to starting talks with the EU. The German leader urged humanitarian care for the refugees and help for them to return home.

Some have been transferred to buildings and given hot meals. Germany gave few details about the conversations. However, Estonian foreign minister, Eva-Maria Liimets, said Lukashenko wants EU sanctions halted and for him to be recognised as victor in the disputed 2020 election and thus legitimate leader.

Some of Belarus’s neighbours frowned on Merkel’s talks with Lukashenko. Polish president, Andrzej Duda, warned his country would not recognise agreements with Lukashenko made “over our heads”.