Call on G7 to evacuate journalists and Afghan helpers 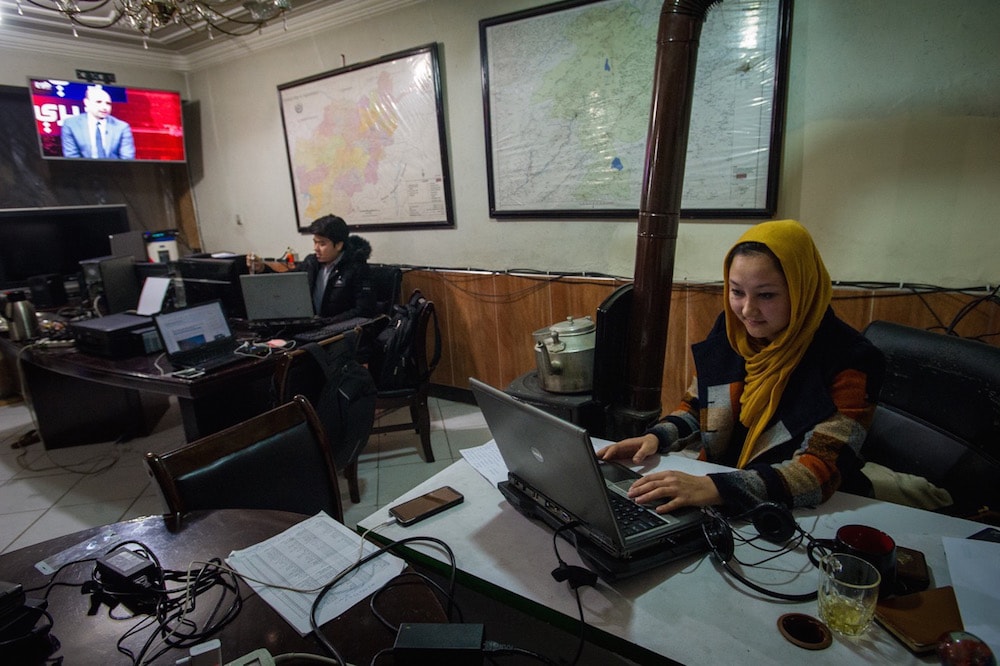 Photo: Journalist Freshta Farhang, who writes about women’s issues for an online media outlet, sits on her desk in the newsroom, in Kabul, Afganistan, 13 February 2019, Scott Peterson/Getty Images

The AEJ is one of more than 50 media and civil society organisations, including many with long-standing operations in Afghanistan, which presented these urgent recommendations to the leaders of the G7 countries to ensure the protection of journalists and their families in Afghanistan. The joint statement was published on 23 August as the international evacuation of Afghans at high risk from the Taliban takeover approached its final phase.

The full text of the recommendations was published by IFEX, the worldwide network of non-governmental organisations that advocate for free expression and freedom of information.

Ahead of the G7 summit on the situation in Afghanistan, civil society and media organizations present key recommendations to ensure the urgent protection of journalists, media workers and their families.

Ahead of the G7 summit on the situation in Afghanistan, we, the undersigned organizations, call on G7 countries to make a clear and explicit commitment to taking journalists and media workers as an urgent and immediate priority, ensure their protection and evacuate them and their families.

We ask that G7 members:

Full list of recommendations in the ANNEX that follows.

We, the undersigned organisations, call on G7 countries to make a clear and explicit commitment to taking journalists and media workers as an urgent and immediate priority, ensure their protection and evacuate them.

We recommend a number of immediate actions to support those at risk and urge a coordinated and rapid response.

– Governments should ensure their visa program and evacuation efforts include journalists, media workers and media advocates, including Afghan media freedom CSOs (specific contacts can be shared if needed)

–  Governments should make clear who is eligible to apply for visas / what documentation would be required to exit the country for processing in a third country and provide language support to help process and expedite applications. The documentation should include other options if a passport is not possible

The route to the airport is currently extremely challenging and risky, particularly for women. Even those who have been granted exit and who have the correct paperwork report being turned away at checkpoints or unable to reach the airport gates. Countries should commit to providing or enlisting escorts for those being evacuated to the airport in Kabul or other routes out of the country (including land border crossings that are also quite risky). In the latest news, the Taliban have started to request a fee at the airport from the Afghans who have relocation papers in place

It is extremely difficult to get funds into Afghanistan at the present time. This makes an already at-risk group even more vulnerable.

As long as banks remain closed, getting emergency funding to local organisations and individuals will be a priority. Governments should identify means for journalists and media workers to safely access funding, such as through the UN bank or other distribution mechanisms

G7 countries that currently fund media programming in Afghanistan should immediately loosen restrictions on all projects to budget lines to be repurposed to supporting journalists’ and media workers’ safety and potential relocation, including support for the establishment of exile media, digital security and related training, as well as to support media outlets operating within the countr

G7 countries should establish an emergency fund for Afghan journalists and media workers to help meet the costs of immediate safety needs and medium-term relocation support, establishment of exile media, and in-country support for the continuation of independent media reporting where possible

Work with the airlines to offer to refund or pay for tickets for people on a cleared list, so that people at risk don’t have to buy the tickets themselves. This also eases the need to get money into Afghanistan

Engage in broader efforts to promote and defend media freedom

Continued access to safety training, especially for women journalists and media workers, mainly in the areas of digital security and surveillance as well as physical security & risk assessment, in Pashto and Dari, including in the event of Internet shutdowns.

Civil society will need a few weeks to assess the impact of the Taliban takeover regarding changes in reporting and potential censorship, especially as risk of a civil war is looming. This must take place not only in Kabul, but in provinces outside the capital.

Centre for Freedom of the Media (CFOM)

Dart Center for Journalism and Trauma