It’s not everyday that a Facebook network pushing disinformation involves a Spanish-language telenovela.

A network of Bulgarian Facebook pages with hints of possible connections to Russia, Colombia, and Vietnam, is pushing hundreds of videos of primetime opinion shows from Fox News, One America News Network (OAN), and Newsmax. The majority of the videos have been posted with altered thumbnails and lower-third headlines, pushing the misleading idea that the conservative personalities reported that U.S. President Joe Biden and House Speaker Nancy Pelosi were going to jail. Both are Democrats. 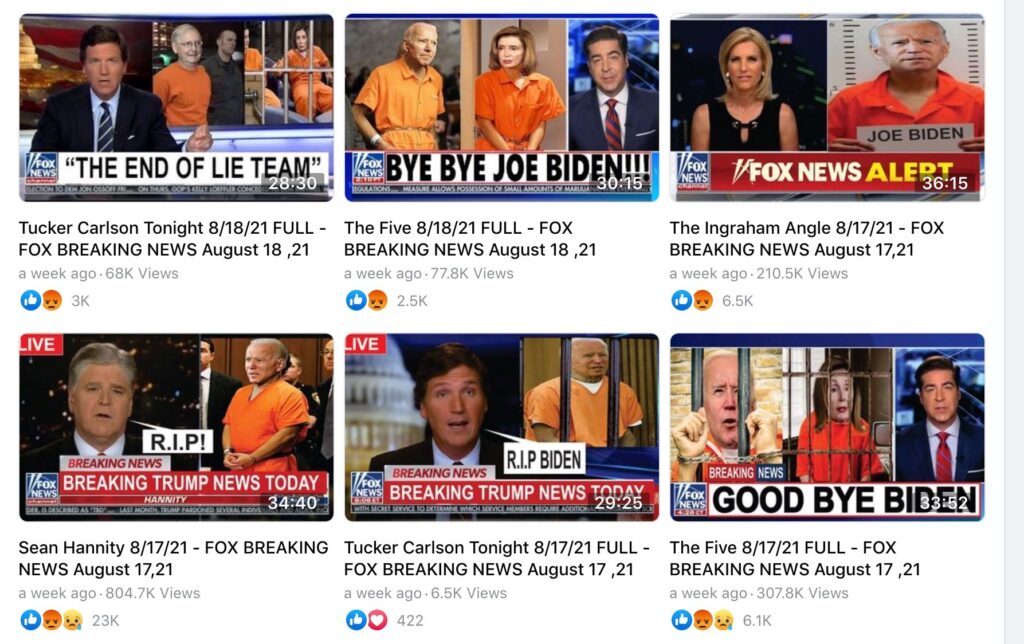 These doctored photographs of Biden, Pelosi, and McConnell in jail were not aired by Fox News. The lower-third headlines were also doctored.

Some of the thumbnails featured U.S. Sen. Mitch McConnell, a Republican, perhaps because, as USA Today reported, he “rebuked” the attempt to overturn the results of the 2020 U.S. presidential election. In the months before and after Election Day, a number of his Republican colleagues latched onto baseless conspiracy theories about voter fraud, an apparent attempt to please constituents who had been influenced by lies on talk radio, cable news, and social media.

In addition to altering the thumbnails and lower-third headlines to make it appear as if Biden and Pelosi were going to jail, many of the thumbnails have falsely claimed that former President Donald Trump was coming back to be president in 2021. However, that is not possible. The next U.S. presidential election is not until 2024.

Trump is not coming back to be the president in 2021.

The clips posted to the pages feature full-length shows from the networks and received at least tens of millions of views over the course of several months, beginning in early 2021.

The website associated with the three pages and the group was trumpdailyreport.com. According to the website’s registration information, the domain was first created on May 26, 2021, purportedly from Da Nang, Vietnam. According to Da Nang Today, the city has recently been dealing with troubles involving COVID-19 misinformation on social media, even going as far as to fine citizens found to be pushing such misleading content. In 2019, we reported about an enormous pro-Trump network known as “The BL,” which had 55 million followers, spent $9.5 million in Facebook ads, and was largely managed from Vietnam. Our reporting, along with an investigation by Lead Stories reporter Sarah Thompson, led to perhaps one of the largest network removals in Facebook history. “The BL” is closely linked to The Epoch Times.

We also noticed that the pages list a phone number with a country code for Colombia: +57.

Two of the three pages that have pushed the altered pro-Trump videos appeared to have been created years earlier, back when they promoted the Spanish-language telenovela “Bella Calamidades,” which translates to “Beautiful But Unlucky.” Screenshots from the television show were uploaded to the pages in 2013. The page may have been compromised by bad actors.

No other photos were visible as being posted on the pages until eight years later when someone managing the content began uploading memes about Trump. This meme was posted by the Гибелна красота / Bella Calamidades Facebook page to the group We Love Breaking News America, where it received at least 16,000 shares.

It’s unclear if there were more pages and groups in the same network, or if their reach extended to other social media platforms.

On Aug. 26, within mere minutes of our team finding the Facebook group and beginning our investigation, it disappeared, despite the fact that it had been around for some time. The three pages also soon disappeared from Facebook, or so we thought. In reality, the web addresses had simply changed, but the pages were still available.

In the days and weeks before this story was published, we reported about how Tina Forte, a Republican running against U.S. Rep. Alexandria Ocasio-Cortez in 2022, was at the Jan. 6 Capitol riot, and also heavily promoted the date beforehand on Facebook and Twitter. She even livestreamed on Facebook Live that day.

We also detailed in two other recent stories about how QAnon content and COVID denialism are thriving on Facebook. In our report about COVID denialism, we detailed how an anti-mask and anti-vaccine Facebook group was pushing sales of fake masks for use in schools. More than two weeks later, as the United States is once again seeing thousands of COVID deaths per day, as children are returning to school in states across the country, and amid skyrocketing case numbers in kids, the fake masks posts are still visible and the Facebook group is still active and thriving on the social media platform.

This story will be updated should any new information come to light.

*Twitter: @jordanliles. Jordan Liles is a writer originally from Tennessee. Prior to joining Snopes in 2016, he created a video series looking at the rise in political misinformation on social media. He found his role with Snopes in San Diego after living for several years in New York City. In his spare time, he creates documentaries about New York history, including “The Sidewalks of New York.” He has a Bachelor of Science in Mass Communication from Middle Tennessee State University.