A Spanish photojournalist visiting Armenia’s Gegharkunik province (see political map) near the border with Azerbaijan last month told the  AEJ that an Azeri soldier aimed a loaded gun at him as if about to shoot. 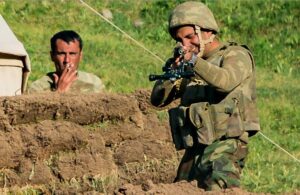 The incident came to light after RSF tweeted on June 23 that a team of Spanish journalists had been “threatened with death” in Armenian territory close to the border with Azerbaijan, condemning what it called an “unacceptable act towards journalists”.

The photojournalist lodged a protest against what he says was a violation of his rights as a member of the media with Armenia’s official Human Rights Defender, On June 20 Hetq Online published a detailed account after interviewing the journalist, known to be an experienced war reporter.

A photo of the grinning soldier peering at the photographer through the sights of a sniper rifle (above) has since circulated on the Internet.

The journalist provided details of the incident to the AEJ as well as local news media, including photographs and maps. He asked for his identity to be withheld for fear of reprisals. In his account he visited the border region on June 15, wearing civilian clothes and in his words “clearly visible as press” on assignment for US media, to cover the presence of Azerbaijani military personnel in fortified positions.

While photographing Azerbaijani military positions inside Armenian territory near the village of Verin Shorzha, the photojournalist saw Azerbaijani soldiers mocking him and charging their weapons as if preparing to open fire. A soldier

standing about 100 metres away raised his high-precision weapon and made as if to shoot at him. The incident was reportedly witnessed by an accompanying journalist and several Armenian soldiers.

The journalist said he had been unable to acquire a permit from the Armenian ministry of defence to travel to the border area. Requests for media access to the area have reportedly been refused following last year’s renewed outbreak of hostilities between the two countries. Nevertheless, the Spanish photojournalist told the AEJ he went there because he considered it his professional “duty” to check the accuracy of Armenian government information indicating that Azerbaijani troops were present in the mountains close to the border.

He claims that he discovered from his own observation and photographs that Azerbaijan soldiers were dug in on lower ground about two kilometres inside Armenian territory.