The beating or worse of Roman Protasevich was paraded to Belarus prime-time viewers last night to the horror and shame of everyone who calls him or herself European. 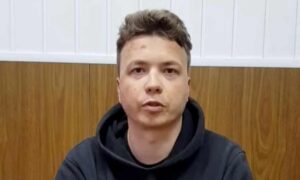 Many of the thousands arrested in the capital Minsk last August ended up at the notorious police detention centre at Okrestina Street.

That is also where 26-year-old Roman’s student girlfriend, Sofia Sapega has been taken, according to her mother. He is said to be in another Minsk jail, identified as preventive prison number one, according to Reuters.

The AEJ man in Belarus, Andrej Aliaksandra, has been detained along with his girlfriend since January 12.   (See Human Right Watch on crackdown on journalists.) There are now 29 colleagues listed as detained, some under house arrest, according  to the IFJ.

Just how old-Soviet are Belarus’ “President” (see OSCE report on his “election“)  Alexander Lukashenko’s methods? Very old school, according to VOA reports on an opposition defendant trying to kill himself in court  “If I don’t plead guilty, they will open criminal cases against my family and neighbours.” he shouted before stabbing himself.

The Economist’s report – some weeks before the Protasevich kidnapping  – reported on the “colour-coding” of victims to indicate who was to be raped/ tortured/ beaten senseless. The London Times carried a blood-curdling report on Lukashenko’s prison methods two days ago:  “Belarus torture prisons ‘use sadists to break Lukashenk’s opponents’’

Here is the testimony in the Times report of a 32-year old doctor, Olga Pavlova, who is among hundreds who have been tortured and raped, according to human rights groups. Psychopaths and sadists are reported to be preferred as the guards best at breaking opponents.

“They like doing this, they enjoy beating people half to death,” Dr Pavlova told the Times. She was locked up in Okrestina, a notorious prison in Minsk, said. “They were laughing as they hit people.” She was hurt when a stun grenade exploded near her at a protest, jailed, and denied medical assistance for her injuries.

When she spoke out, a prison guard named Yevgeny smashed her head repeatedly against a wall. “You do not have any rights,” he shouted. The  doctor, one of 36 women packed into a grimy four-berth cell with little ventilation, and a hole in the floor for a lavatory, said: “I thought I would die…The beatings went on all night.”

Dr Pavlova, who spent three days in prison before being released without charge. “They dragged a naked man out of his cell and beat him until he was urinating blood. They told him to clean the blood up with his naked body.”

The paper also reported that in retaliation for sanctions and refusals to fly to or over Belarus, Lukashenka has  threatened à la Turque to flood the EU with immigrants and drugs: “We stopped drugs and migrants. Now you will eat them and catch them yourselves,” he said.

Belarus exiles kidnapped and smuggled out of Poland in car boots

What happens in Belarus mental hospitals?