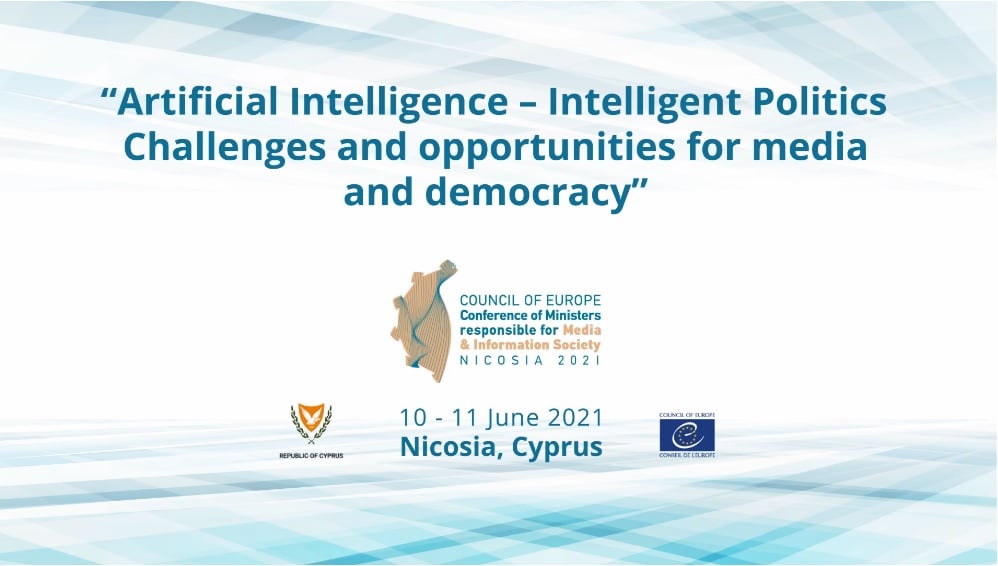 The Council of Europe has announced details of the Conference of Ministers responsible for the media to be held on June 10 and 11 https://www.coe.int/en/web/freedom-expression/media2021nicosia .

It will be hosted by Cyprus but will take place online because of limitations on travel in Europe. High-profile personalities and experts will speak publicly in wide-ranging thematic sessions, including on journalists’ safety, the impact of artificial intelligence, and media literacy. Most sessions will be open for everyone to follow in full via the conference website.

This is the first such ministerial gathering for eight years and it promises to be of practical interest to journalists. According to the published agenda, the key themes for ministers and other participants are the ‘serious backsliding in the safety of journalists’ and protecting the work of free media in the face of massive digitalisation, the influence of artificial intelligence, and other threats.

The conference will carry an important political message, after Secretary-General Marija Pejćinović Burić issued a strong warning last month in her Annual Report about a “worrying degree of democratic backsliding” in some member states https://www.coe.int/en/web/secretary-general/report-2021#page-0 . She also pointed to what she called a “wave of censorship” related to government responses to the Covid 19 pandemic.

What’s new is the open recognition of the urgent need for governments to do much more to implement their commitments, and the growing acceptance of European governments to seek the active participation and engagement of journalists and other non-governmental voices.

The most serious concern for journalists and press freedom defenders, as always, is that some Council of Europe member states continue to openly defy judgements of the European Court of Human Rights, contrary to their legally binding obligations. Ms Burić has stated that as of January 2021 member states had failed to fully implement Court judgements that found violations of Article 10 (Freedom of expression) in as many as 332 cases. The report by the partner organisations for the Platform for the safety of journalists recorded a record 201 alerts about serious threats to media freedom last year

On the first conference day the stage is set for high-profile speakers including leading international lawyer Amal Clooney, who heads an international panel of legal experts on media freedom dedicated to strengthening global protections, the Director-General of the European Broadcasting Union Noel Curran speaking about threats to independent public broadcasting, and EU Commissioner Vera Jourova, whose speech will reflect the close coordination between the EU and Council of Europe aimed at reversing the backsliding of media freedom and journalists’ safety’

In the afternoon the AEJ will make a joint presentation with other press freedom partners of the Council of Europe’s Platform for the safety of journalists. The session will set out a far-reaching “Blueprint for effective action for media and journalists’ safety”,  by influencing governments to drastically strengthen protections against targeted attacks and ensure that journalists are not suppressed or harassed by bad laws or arbitrarily imprisonment.

In advance of the conference the Council of Europe has published a user-friendly “Implementation Guide” https://www.coe.int/en/web/freedom-expression/implementation-guide.

It’s designed to encourage governments and all stakeholders to better understand the demands of European Convention law, and to contribute to securing those protections against violence and legal abuses including vexatious lawsuits and impunity for crimes committed for crimes against journalists.

On Day Two the ministerial Round Table meeting will be held behind closed doors, but open sessions will take place all day, including an event on setting up mechanisms to enhance the safety of journalists. Establishing national action plans for the safety of journalists in every member state is one of the major goals of the Council of Europe’s strategic agenda for the next four years.

The conference will end with the adoption of several substantial Resolutions, and a Final Declaration. Officials say that together these outcome documents will amount to a “roadmap” to strengthen protections for freedom of expression online and offline, the safety of journalists; and to address the complex tasks ahead, related to regulating online communications for better transparency and countering disinformation.

To do their job well, journalists need to ask the right questions. For journalists and all concerned with holding government power to account, the debates at the ministerial conference are a good chance to take stock of the crisis for press freedom in Europe, and to see what governments themselves are doing about it, or not.

NB Deadline to register for a June 9 press conference is 9 June , nest Wednesday..!

Strasbourg/Nicosia, 03.06.2021 – European ministers responsible for media and information society will meet online on 10 and 11 June to discuss the ways to address the challenges to freedom of expression brought by massive digitalisation in the media and information environment – including the use of artificial intelligence (AI) – and by the serious backsliding in the safety of journalists.

Jointly organised by the Council of Europe and the Cypriot government under the theme “Artificial Intelligence-Intelligent Politics: Challenges and opportunities for media and democracy”, the conference aims to secure the political engagement of the Council of Europe and its 47 member states to a number of priority actions and to map the future work of the organisation in the fields of media and information society.

New digital technologies driven by AI have created new opportunities for the exercise of freedom of expression, allowing access to vast amounts of information but also generating risks of targeted persuasion and manipulation. Search engines and social media platforms have caused a structural shift in the information environment putting at risk the business model of traditional media and favouring the dissemination of information based on virality rather than quality, also creating major risks for the spread of disinformation. At the same time, journalists face increasing obstacles to do their work safely and are often the target of physical attacks and intimidation.

Aiming to address these challenges, the ministers are expected to adopt a political declaration and four resolutions on issues such as the impact of AI products and processes on freedom of expression and the possibility of introducing regulation to ensure more transparency in the dissemination of news to combat disinformation – notably during electoral periods.

Other issues to be considered are the need for measures to improve the safety of journalists, for example, through dedicated national action plans for the protection of journalists and other media actors, and ways to reinforce the resilience of freedom of expression protection safeguards in member states in times of crisis, such as the Covid-19 pandemic.

Representatives from civil society, media, and freedom of expression experts will also participate in the conference. In a “world-café” format, ministers will have to opportunity to receive first-hand accounts from local and community media representatives on projects aimed at improving the access of marginalised communities to media during the pandemic, and from media freedom experts on best practices to enhance the protection of journalists.

Amal Clooney, Deputy Chair of the High Panel of Legal Experts on Media Freedom, and David Kaye, Independent Board Chair of the Global Network Initiative, will make special interventions.

An online press conference is scheduled around 1 p.m. on 11 June. A request for accreditation should be made before noon Wednesday 9 June (accreditation form).