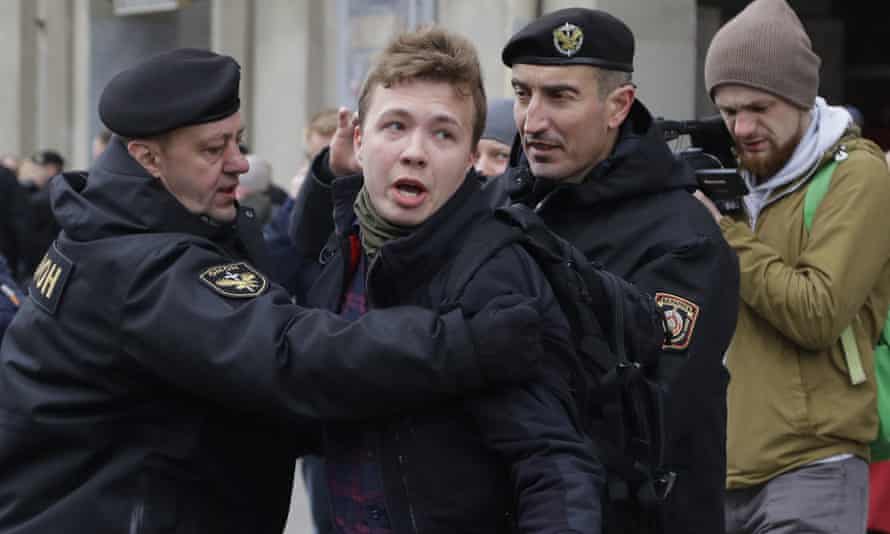 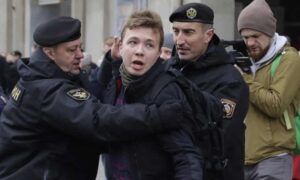 May 25, 2021 Prof Timothy Snyder commentary on Terror vs the Truth in Belarus

21.00 May 24  EU puts Belarus on notice. Questions about FSB involvement

19.03 May 24   RT (Russia Today) reports that Lukashenko is to restrict media even further

Already on a political collision course with the EU and the US, Belarus President Alexander Lukashenko’s regime will face more sanctions after the state military hijack of a civilian airliner carrying exiled journalist and activist Protasevich, 26, wanted for “terrorism” and potentially facing many years in jail or even the death penalty.

Following a fake bomb scare, Ryanair flight 4978 from Athens to Vilnius, Lithuania, was ordered by Lukashenko personally to U-turn to Minsk, then escorted down by a MiG-29 fighter jet.

The affair could have more serious implications than for aviation safety. On Irish breakfast television today Ryanair’s boss Michael O’Leary said: “we believe there were some KGB (FSB) agents offloaded at the airport as well”, the first confirmation of reports that four other passengers disembarked in Minsk after the emergency landing. See Politico interview today and Irish Taioseach Micheál Martin on RTE. Protasevich – as he told friends – was being shadowed by a Russian at Athens airport.

“The outrageous and illegal behaviour of the regime in Belarus will have consequences,” Commission President Ursula von der Leyen tweeted ahead of a European Council meeting in Brussels this evening. “Those responsible for the #Ryanair hijacking must be sanctioned. Journalist Roman Protasevich must be released immediately.”

Protasevich had been in Athens to cover a visit by Svetlana Tikhanovskaya, a candidate in the 2020 presidential election who declared herself the country’s leader-in-exile after the fraudulent election last August.

The EU in February renewed sanctions against  Lukashenko, 66  and his senior officials for the blatant rigging of his re-election last August, violence against protesters, and harassment or imprisonment of journalists

Polish Prime Minister Mateusz Morawiecki called the hijacking “an unprecedented act of state terrorism. It cannot go unpunished.”  Poland has previously rejected an extradition request by Minsk.“The regime is behind the abhorrent action. “I demand to free Roman Protasevich urgently!” he wrote.

AEJ Secretary-General Edward Steen said: “If Europe as a whole does not finally react in a serious way now, then when? We are concerned for the very many journalists locked up for months now in Belarus, with more raids, arrests, and phony charges against the TUT.BY online media outlet only a few days ago.

“Roman faces up to 15 years in prison, maybe worse. Is that a price he or any other journalists must pay for simply doing their jobs?” Given the worsening crackdown on media in Russia itself, and especially the silencing and imprisonment of Alexander Navalny, possible Russian secret service involvement in Belarus was “more than troubling”, he said.

Roman Protasevich was editor-in-chief of the popular sister Telegram channels Nexta and Nexta Live, based in neighbouring Poland, with an audience of almost two million. These served as a channel for the large-scale protests against Lukashenko’s re-election last year, and exposure of police brutality including torture. Lukashenko countered by saying he would “rather be killed” than hold fresh elections, and accused Protasevich of “terrorism”.

Protasevich had been in Athens to cover a visit by Svetlana Tikhanovskaya, a candidate in the 2020 presidential election who declared herself the country’s leader-in-exile after the fraudulent election.

“The regime forced the landing @Ryanair plane in Minsk,” she wrote in a series of tweets. “Roman Protasevich (… ) faces the death penalty in Belarus. We demand immediate release of Roman, @ICAO investigation, and sanctions against Belarus…Lukashenko’s regime endangered the lives of passengers on board the plane. From now – no one flying over Belarus can be secure. International reaction needed!”

Protasevich told colleagues earlier on Sunday he had been followed while travelling to Athens airport. A man speaking Russian had attempted to photograph his documents, he wrote to colleagues.

“He was next in line at the document check and just turned around and walked away,” he said. “For some reason, he also tried to secretly photograph my documents.” Protasevich has not been heard from since his arrest.

“They will kill me’” – what other passengers saw and heard

What’s next? Summary in The Week (UK)