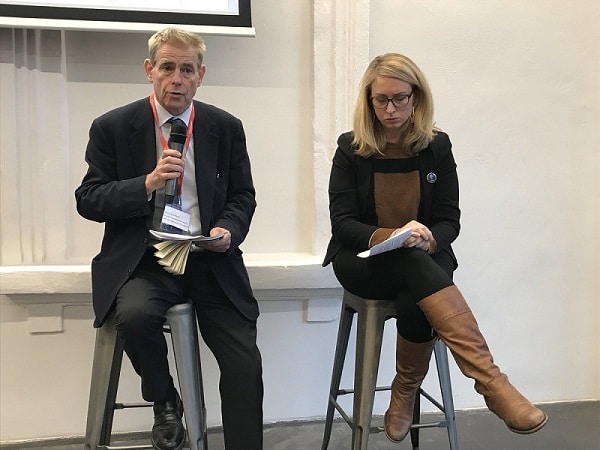 Jennifer Adams, Project Leader of the ‘Safety of Female Journalists Online’ campaign  in the Office of the OSCE’s Representative on Freedom of the Media , spoke at the AEJ’s Congress in Vilnius, Lithuania, on Friday 17 November, highlighting the additional risks faced by female journalists and measures to promote online safety. Online abuse of female journalists is recognised as a disturbing and dangerous aspect of the multiple new threats to the safety of journalists in Europe…

Recognizing threats of murder, rape and physical violence directed at female journalists on social media platforms as a direct attack on freedom of expression, the Office of the OSCE Representative on Freedom of the Media launched a campaign in 2014 to counter the impact of online harassment and to increase awareness of the issue.

She told the Congress that both the severity and scope of sexist and misogynistic abuse of women journalists were shocking. Whether perpetrated by individuals or states, this kind of intimidation is aimed at silencing journalists and forcing them to stay off social media.

“We want to tell governments that it is not a matter of gender sensitivity or equality, but ensuring plurality”, Adams said.

Jennifer Adams and her campaign team are reaching out to journalists, civil society and academia through workshops, media events, training and an online resource hub on the Office’s website www.osce.org/fom .

As well as raising awareness and providing support to journalists experiencing online harassment, the Office of the OSCE Representative on Freedom of the Media intervenes in individual cases of state-sponsored or state-condoned trolling and harassment.

Adams warned that state-condoned cyber threats often preceded physical attacks against journalists. All four murders of women journalists in the OSCE region followed social media harassment.  “All were threatened online, several of them by their governments” she said.

In her speech to the AEJ Congress in Vilnius, Jennifer Adams emphasised the need for governments to refrain from introducing new regulations that could stifle freedom of expression. Instead, what is needed is more transparency and better application of existing laws.