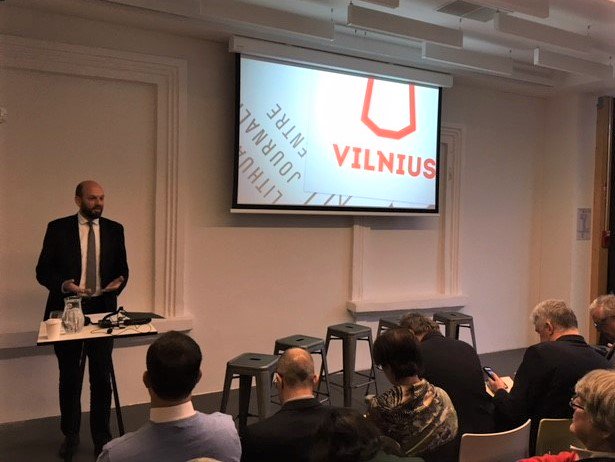 Lithuania’s Vice Foreign Minister, Darius Skusevičius, spoke at the AEJ’s Congress in Vilnius, Lithuania, on Friday 17 November,and he outlined to the association’s member journalists from 20 countriesthe ‘smart’ policies his governmentas aNATO memberis pursuing to combat what he called Russia’s ‘information war’ of hostile disinformation and false news campaigns. Mr Skusevičius claimed that ‘purposefully misleading information’ put out by ‘dishonest media’ shouldbe seen as an extension of Russia’s military aggression in Ukraine. He said the propagation of Russian disinformation to the Baltic states and other countries in Europe was aimed at extending Russia’s political influence and undermining trust in the media in the West. It ‘must be combatted’, he declared.

Speaking on the theme of ‘reliable media and democratic politics’, the Vice Foreign Minister set out Lithuania’s 4-point approach to exposing and containing Russia’s ‘state-sponsored news and actions’ . The response would consist, he said, of 1) exposing the nature of ‘hostile information’ broadcast by Russian state-owned stations like Sputnik TV and RT (which he described in an aside as ‘Russia Yesterday’); 2) tackling the funding sources for those media; 3) maintaining western cohesion to disrupt the flow of falsehoods and hostile material; and 4) adopting an ‘adequate’ and comprehensive response – which should include promoting independent, high-quality media and equipping citizens in democratic states with the knowledge to distinguish between reliable and false information sources.

Lithuania has been a consistent supporter of international policies and campaigns related to bolstering media freedom and journalists’ safety. In 2015 Lithuania helped to sponsor a UN Security Council Resolution (2222) which called on all states to create a safe environment ‘in law and practice’ for media professionals to do their work, including in conflict situations. Lithuania is also a member of the international ‘Group of Friends on the Protection of Journalists’ at the UN. It is made up of at least 17 countries from all regions of the world committed to strengthening the protection of media workers and enhancing the accountability for crimes – including crimes of violence – committed against them.

Mr Skusevičiuswas speaking in advance of an EU summit meeting in Brussels on 24 Novemberwith leaders of the six ‘Eastern Partnership’ states– Armenia, Azerbaijan, Belarus, Georgia, Moldova and Ukraine – where European leaders are due to pledge further support for those countries in strengthening rule of law, fighting corruption, engaging with civil society groups and strengthening independent media. On 14 November British prime minister Theresa May made a forceful speech accusing President Putin’s government of trying to undermine free societies and sow discord in the West by planting fake news stories and carrying out cyber espionage as well as threatening the security of countries like Ukraine.

The AEJ Congress, attended by over 60 journalists, held intensive debates with leading experts and practitioners on a range of related issues, including disinformation campaigns by Russian-controlled media and GONGOs (government-owned NGOs), fact-checking and editorial integrity, the rapid spread of manufactured ‘fake news’ from multiple sources, and the uses and misuses of data journalism.