Help the journalists in Syria 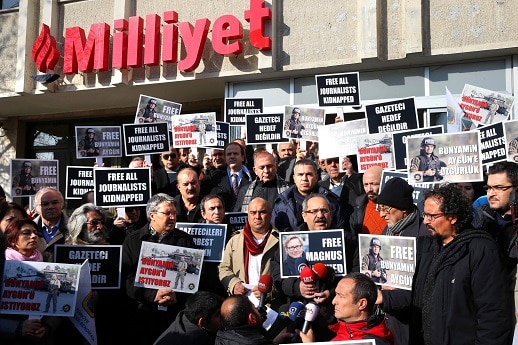 aejorghttps://aej.org
G-9 Platform organized in 5 major cities of Turkey – Istanbul, Ankara, Izmir, Antalya, Trabzon – several activities for the release of journalists kidnapped in Syria. In Ankara, journalists gathered in front of Milliyet daily. The photo-journalist of Milliyet Suleyman Aygun was kidnapped in Syria about a month ago.
Besides journalists, parliamentarians also participated the event. Chairman of Photo Reporters Association and Dogan Tilic addressed the crowd and called on Turkish government to do all to help the journalists in Syria. In his speech, Tilic underlined the importance of international solidarity for the release of journalists abducted in Syria and said that AEJ was working at that level.
Share
Facebook
Twitter
Pinterest
WhatsApp
Email
Print
Previous articleThe AEJ backs urgent call for release of Turkish photo-journalist and all media workers abducted or detained in Syria
Next articleHeadline:AEJ voices extreme concern after vicious assault against prominent Ukrainian journalist
- Advertisement -