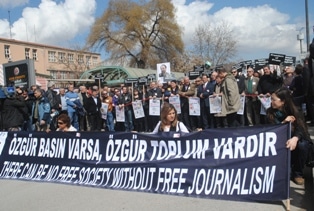 aejorghttps://aej.org
Why? What is happening in Turkey?
by AEJ Vice-President L.Dogan Tilic
Journalists in Turkey have in the last several years felt increasingly under the threat from detention. prosecution and trials, which often lead to fines or imprisonment, solely for their journalistic activities. Today, despite Prime Minister Recep Tayyip Erdogan’s statements that there is no one in jail for their journalistic work and that 27 journalists currently in jail are there for other reasons, the GOP Platform has a confirmed list of 68 journalists in jail. Seven of them have been convicted, and the rest are in detention pending trial or court judgments. Since 2009 30 journalists have been set free on bail pending later  trials.
Altogether around 90 journalists have been held in jails within the last 2 years alone.
In addition, 45 journalists more journalists have been given sentences involving fines or imprisonment which are suspended for five years. That represents powerful pressure for self-censorship, not only for those journalists themselves but also for others, who well know the consequences of provoking criminal proceedings against them for their work. Those 45 journalists face actual imprisonment if and when they are deemed to have repeated the same “crime”.
Besides all of these, there are over 2000 ongoing criminal proceedings and more than 4000 investigations targeted against journalists. A number of media companies and owners are under severe economic pressure due to the threat of heavy fines related to alleged financial improprieties. As a consequence, many media owners feel obliged to exercise censorship against their own columnists from time to time. Recently, several columnists from the mainstream media have had to leave their newspapers, or have had the number of their weekly columns reduced.
All of these forms of harassment lead to a climate of self-censorship among those who express legitimate criticisms of those in political power. The latest detentions have increased the grave concerns about the future of free journalism.
Journalists have reason to believe that their telephones are tapped. Illegally taped conversations have been used against journalists as alleged evidence of their “criminal” activities or “membership of banned organizations”.
Most of the journalists now in jail are accused of being members of, or making propaganda for, a terrorist organization (Ergenekon, the PKK, Revolutionary Headquarters or the Marxist-Leninist Communist Party.)  But the only evidence presented to support these accusations is in fact their journalists activities, which comes from phone calls with their news sources, documents in their possession, their published stories, their notes, interviews with the leaders of illegal organizations, and their published or unpublished books. For example, the draft of a book by Ahmet Sik which is intended to be published makes up part of the evidence for the charge against him of being a member of the Ergenekon organization.
This onslaught on legitimate freedom of the media and freedom of expression is not only due to the misapplication of laws by the judiciary. Journalists’ organizations have given details of some 27 articles of the penal code now exist which restrict freedom of expression. Turkey’s Anti-Terrorism Law is one of the chief obstacles to free expression.
The Freedom For Journalists campaign and the mass demonstrations of the last several weeks are organized by journalists organizations gathered under the GOP Platform. GOP is a recent formation but these activities go back several years. AEJ Turkey has always played a key role in bringing together disparate Turkish journalists organizations, and the G-9 Platform succeeded in bringing 11 leading nationwide associations togetehr more than a decade ago. The G-9 Platform paved the way for the GOP and for the recent campaigns, with the Journalists’ Union of Turkey (TGS) taking the lead.
On May 24th last year the “Freedom For Journalists” campaign was started at national level.  Then the European Federation of Journalists and the International Federation of Journalists gave strong support at the international level in June 2010. The AEJ also gave its support and solidarity.
In August 2010, 22 journalists organization established the Freedom for Journalists Platform. Since then the platform has further widened rapidly and it now consists of 26 national and 66 local professional journalists’ organizations. The establishment of the Platform is in response to the climate of increasing fear and alarms among journalists about the severe restrictions imposed on their freedom to carry out their work.
The GOP wrote an Open Letter, signed by many journalists, demanding the immediate release of jailed journalists and the repeal or amendment of laws that restrict freedom of expression. The letter was sent to the Prime Ministry last September. At the international level, there is also an ongoing campaign to send e-cards to the Turkish Prime Minister in support of the same appeal.
The e-card can be signed and sent by using the following link:
http://europe.ifj.org/en/articles/efj-urges-turkey-free-jailed-journalists-now
The link was also put up on the AEJ website with an invitation for other journalists to sign it.
The demands of Turkish journalists demand can be summarized as follows: “Set the jailed and detained journalists free immediately, and change Turkey’s laws so that they conform to the European Coinvention on Human Rights and the case law of the European Court of Human Rights.”
I thank all my colleagues in other countries who have expressed their support, especially in the past week of intense protests and campaign activities. This campaign will continue intensively, with mass actions by journalists and supporters due to take place on May 3rd.
L. Dogan Tilic, AEJ Vice President
Share
Facebook
Twitter
Pinterest
WhatsApp
Email
Print
Previous articleAEJ calls for stronger European action against repressive Turkish media laws
Next articleAEJ Italy, Newsletter March 2011
- Advertisement -