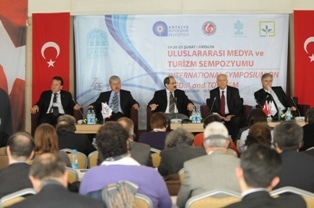 AEJ Turkey and Dogan Tilic (President of the section) supported a meeting of over 100 journalists from every corner of the world, dealing with the tourism industry. The event was succesfully held in the city of Antalya, the so called Turkish capital of Tourism, on February 19 – 20, 2010.

“International Tourism & Media Symposium”, organised by TURKCEV – the Turkish Association of Tourism and Environment Reporters – met with great success and significant outcomes for the future of the tourism product. Among speakers were the Turkish Minister of Culture and Tourism, Mr. Ertugrul Gunay, the Mayor of Antalya, Dr. Mustafa Akaydin, the Secretary General of TYD (Turkish Tourism Investors Association) and board member of UNWTO, Mr. Koray Yetik, the Secretary General of Instanbul – 2010 European Capital of Europe agency, Mr. Yilmaz Kurt and other distinguished guests.