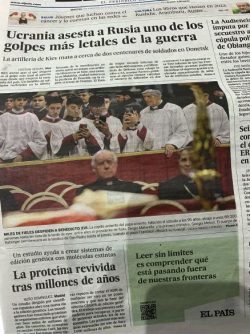 AGE – AEJ Italian Section President Nuccio Fava on the death of Pope Benedict XVI, with an analysis of television information in Italy. Nuccio Fava was director of RAI’s TG1.

RAI and the death of Pope Benedict XVI

When major events burst onto the scene of history it is comforting even for us modest tele-viewers at home to discover that our RAI TV knows how to fulfil its role as a public service. We had positive confirmation of this on the occasion of Benedict XVI’s death, albeit not sudden, at the age of 95, after his revolutionary decision to resign.

His personal commitment in recent years, absorbed essentially by prayer and uninterrupted meditation so distant from our ordinary daily labours, did not, however, prevent him from arousing emotion, prayers and great reactions reflected with great prominence in the media system throughout the world.

Even RAI was mobilised in the best possible way in terms of coverage and quality of narration and commentary with the significant coincidence between the memory of the Pope Emeritus, the Mass in St. Peter’s Basilica dedicated to the World Day of Peace instituted by Paul VI, and the particularly strong invocation for an end to the war in the tormented Ukraine.

expressed with regard to the open crises in the weakest and neediest areas of the planet and with regard to the duty of solidarity and commitment to foster growth and accompany development in these situations of greatest difficulty also due to the food and energy crisis.

Both exchanged good wishes and appreciation for the positive work with which they look at Italy’s progress. All of this was done with great naturalness and simplicity, a substantial beautiful and secular harmony between the end-of-year speech live from the Quirinale Palace and Pope Francis’ Angelus from the window of St. Peter’s Square.

This harmony is all the more significant because it also concerns the difficulties of communities, especially of young people and movements committed to peace, starting with the war against Kiev and the tragic violence against the demands for freedom of Iranian girls and youth.

Tragedies and challenges that afflict humanity and urgently require a renewed choral commitment from Europe. In the presence, therefore, of so many serious problems of the present season, the painful occasion of the death of a great courageous and innovativepope, as well as Pope Francis’ untiring invitation/ invocation to the building of peace and the commitment of each individual, especially with generous attention to the weakest and most in need of closeness and help, are all the more precious reminders for all of us.

These are simple points of reflection suggested by all that RAI has been able to show us in these last days in an excellent manner. An important reflection in itself and one that could also be a great little lesson on the relevance and delicacy that public service broadcasting can have in our lives. And thus an enormous contribution to the cultural and civil growth of Italian society as a whole.