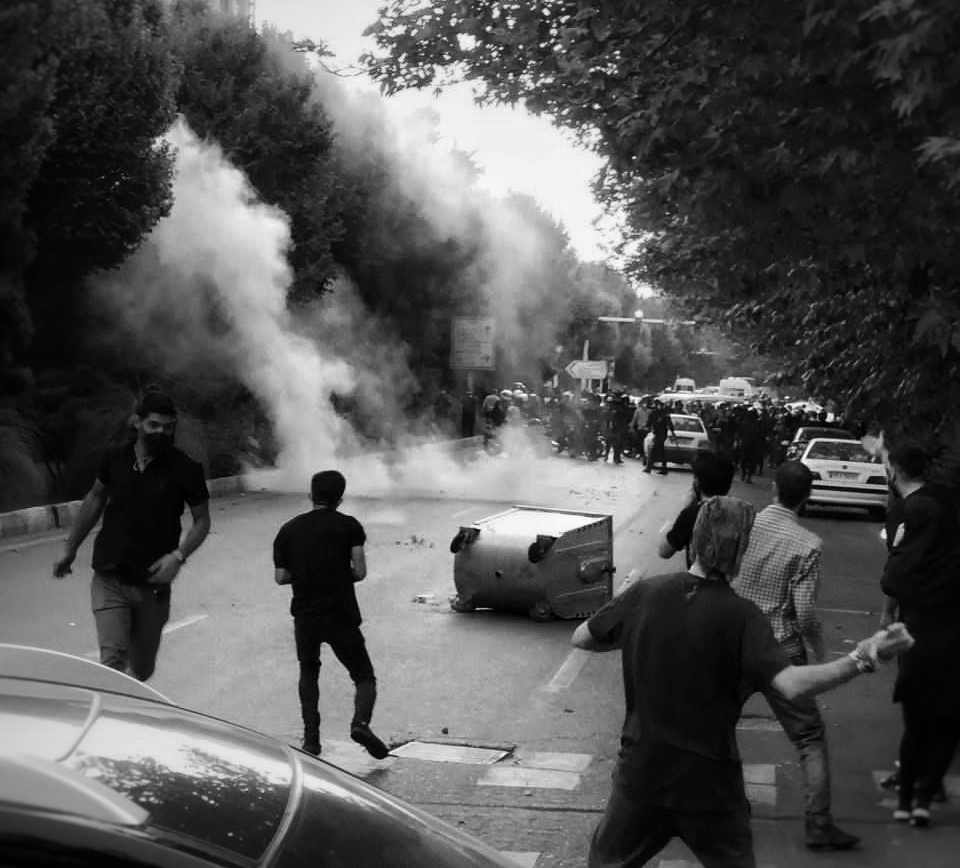 IRANIAN PROTESTERS ON KESHAVARZ BOULEVARD IN TEHRAN. LICENSED UNDER CC0 4.0.

Before this September, I hadn’t heard from Yara in months. They’re an Iranian journalist who has reported for the country’s most prominent newspapers and publications. We first met in New York in 2018 and bonded over the difficulties that come with reporting on Iran: they were rightly afraid of being arrested for their work, and I’ve been afraid that I will no longer be able to return to the country where I was born due to writing about it from abroad. As the Islamic Republic began to escalate the crackdowns on journalists, activists, and civil society, Yara—a pseudonym I’m using to protect their identity—was forced to leave Iran. But when their father was diagnosed with cancer, they had to return. They messaged me to say they were going back and let me know I likely wouldn’t hear from them. If the authorities knew that Yara was communicating with me, an Iranian dual national who works for the New York Times, they could accuse them of conspiracy, spying, and a whole host of other nonsensical charges. I worried about Yara, but I knew their silence meant they were safe.

In September, a twenty-two-year-old Kurdish woman named Mahsa Amini died after being detained in Tehran by the so-called Morality Police for breaking the “hijab rule.” On Twitter, a photographer named Niloofar Hamedi posted a photo of Amini unconscious in a hospital bed, with tubes coming out of her mouth, a swollen face, and dried blood on her ears. Her image enraged Iranians and sparked mass demonstrations. The protests are now in their fifth week and have spread to more than eighty cities and towns. It’s both the largest and most widespread uprising that the Islamic Republic has seen in its forty-three-year history. Many of us, familiar with the state’s history of lethal crackdowns, were waiting nervously for them to begin. Arrests have already started, as have periodic internet shutoffs. Hamedi is now in solitary confinement in Iran’s notorious Evin Prison.

On September 26, during the third week of the protests, I finally heard from Yara. They had just been arrested and interrogated at the Ministry of Intelligence. “They will take me to jail for about two years due to my reports,” Yara wrote. “But I am not scared, something like hope is rising among us, hope for changes, for women, life, freedom, for visiting you in Tehran soon.” They said it may be a month or two until they have a court date and are sent to prison. In the meantime, they wanted to collaborate on another story. They sent me their notes and wrote, “Keep our fingers crossed that the internet will work tomorrow.”

In the days after her death, the state television network broadcasts a short, interrupted video of Mahsa Amini fainting in the detention center, trying to argue that she died of natural causes. Mahsa’s father declares this news to be completely false; those who were with her in the Morality Police van testify that she was beaten while being transported to the Morality Police headquarters. Mahsa’s brother says that the officer who arrested his sister had a camera, so videos from inside the Guidance Patrol van should be reviewed.

The day after Mahsa’s burial, people from other cities in Kurdistan come out in the streets to protest. On the very first day, three people, including a child, are killed as a result of direct fire from the repression forces. The cities of Kurdistan go on strike.

At various universities, from the North to the South, students have launched massive demonstrations. They chant: “We neither want a king, nor a rahbar (the supreme leader); down with every oppressor.”

Female activists call for a rally on Keshavarz Boulevard. The second day of the demonstration is a scene of confrontations between several thousand people and the riot police. The first line of protesters are women and men, hand in hand in front of the special guards. Girls are burning their hijabs amid cheering protesters. Shortly after, the guards drive the protesters to the streets around the boulevard with tear gas, batons, and stun guns. The cats of Laleh Park on Keshavarz Boulevard have been attacked by so much tear gas that their eyes won’t open. The old woman who comes every week to feed them has unknowingly shown up and can’t find her cats.

Protests enter their second week. I’m waiting on the street for the taxi to arrive when I see an old religious man coming towards me. At first, I’m afraid he wants to mention I’m not wearing a hijab. All of a sudden, he brings his phone in front of me and shows me Mahsa Amini’s photo, saying, “Can you believe it, ma’am? They killed someone’s daughter. I myself have a daughter. I swear to God, I haven’t slept for a week.”

They say this is the women’s revolution. Maryam, who is on the street every day and has been attacked by so much tear gas that her eyes are swollen, says, No matter what, let’s see each other at Café Haft. We hear that Abbas is missing. Two days later, we find out that he has been arrested. They have arrested Roghiyeh’s and Maryam’s friends too. I have no way of communicating with the world outside of Iran. The internet is down and no VPN is working.

Maryam comes to the café one hour late. She says they are arresting journalists one by one. Fatemeh Rajabi has been taken into custody. Elaheh Mohammadi’s house has been raided and her belongings taken away. Elaheh, who went to Saqqez to cover Mahsa’s funeral, has also been arrested.

There is a full military curfew in Kermanshah and Mashhad, and Qasem Soleimani’s banners have been set on fire in his hometown. My friends tell me about the scenes in the streets: the young girls who try to block the officers by dragging a trash can into the middle of the street, the women who neutralize the effects of tear gas by setting their headscarves on fire with alcohol, the drivers who create traffic to block the officers and frustrate them by continuously beeping their horns. Where have they learned these things? Courage is contagious. An old woman says to one of the guards, “I’m your mother; don’t hit me.”

Elham says that on the first day, she and her friends were stuck in the boulevard and the officers were attacking them with stun guns. On the second day, four of them were hit with paintballs and still went back to the street with their bruised bodies. They have gone to the street every day since last Thursday, and now it’s Friday; every day with bruised bodies, painful feet, and empty hands, protesting against the mandatory hijab, against their lost rights. She says, “They don’t want us and we don’t want them either.” She says she is waiting for the day when she can dance in the streets. Honestly, me too.

It’s Saturday night. The ninth day of protests. Right now, as I’m writing this, I can hear shouts of “death to the dictator” from outside. The slogans have also changed—from “Don’t be afraid! Don’t be afraid! We’re all in this together!” to “Be afraid! Be afraid! We’re all in this together.” They pour burned oil on the streets so the police will slip and fall. In response, the police have torn up and taken license plates from the cars of many protesters.

There are more and more arrests. The names of five arrested lawyers are announced. One of them is the lawyer of three arrested youths who were sentenced to death during protests in January. Yalda Moaiery, the photographer who took a famous photo of the Bloody Aban protests, is also arrested. Those protests began in late 2017 and lasted until January 2018—initially they were focused on economic grievances like the plummeting value of the Iranian Rial, overall unemployment, and lack of job prospects for Iranians, but they later expanded to call for a downfall of the entire system. Moaiery is in Qarchak Prison. She has said that they are forcibly giving tranquilizers to the prisoners. One hundred women are kept in a shed.

Last night, driving home, we saw that the repression forces were eating. At the red light, us three angry women with no hijabs were staring at them. They refused to look into our eyes. It is the tenth day of the presence of people in the streets. There is now nearly a full military curfew in Tehran.

We have come a long way: from December 2018, when Vida Movahed, a young woman from Tehran, sparked the Girls of Enghelab protests against the mandatory hijab, to today, when girls burn headscarves and dance in the streets. We have come a long way: to realizing that whether the country is sanctioned or not, the amount of food on our dinner tables is getting smaller. We have come a long way: from the day when we were participating in elections with hope, shouting Where is my vote?, to seeing that it doesn’t matter if the government is fundamentalist or moderate, because democracy and laws have lost all meaning in this country. We have come a long way: from all the arrests and detentions, and from mourning Sahar Khodayari, the “Blue Girl,” who lost her life to watch football in 2019, to the day that stadiums were conditionally opened to women due to pressure from activists and FIFA. The truth is that we have seen the fate of our Afghan sisters following the country’s takeover by the Taliban, and we know we shouldn’t expect the West and America to save us; we are our own saviors. Whether this is a women’s revolution or a revolution for women, we won’t go back.